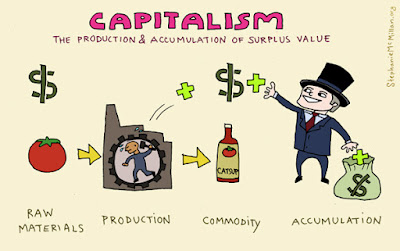 Marx was fond of quoting the 17th century writer Sir William Petty’s remark that labour is the father and nature the mother of wealth. Marx’s materialist conception of history makes the way humans are organised to meet their material needs the basis of any society. Humans meet their material needs by transforming parts of the rest of nature into things that are useful to them; this in fact is what production is. So the basis of any society is its mode of production which, again, is the same thing as its relationship to the rest of nature. Humans survive by interfering in the rest of nature to change it for their own benefit. That humans have to interfere in nature is a fact of human existence. How humans interfere in nature, on the other hand, depends on the kind of society they live in. Humans are both a part and a product of nature and humans have a unique significance in nature since they are the only life-form capable of reflective thought and so of conscious intervention to change the environment. It is absurd to regard human intervention in nature as some outside disturbing force, since humans are precisely that part of nature which has evolved that consciously intervenes in the rest of nature; it is our nature to do so. True , that at the present time, the form human intervention in the rest of Nature takes is upsetting natural balances and cycles, but the point is that humans, unlike other life-forms, are capable of changing their behaviour. In this sense the human species is the brain and voice of Nature i.e. Nature become self-conscious. But to fulfil this role humans must change the social system which mediates their intervention in nature. A change from capitalism to a community where each contributes to the whole to the best of his or her ability and takes from the common fund of produce what he or she needs. Competitive pressures to minimise costs and maximise sales, profit-seeking and blind economic growth, with all their destructive effects on the rest of nature, are built-in to capitalism. These make capitalism inherently environmentally unfriendly. Attempts to “green” capitalism, to make it “ecological”, are doomed by the very nature of the system as a system of endless growth. The only framework within which humans can regulate their relationship with the rest of nature in an ecologically acceptable way has to be a society based on the common ownership and democratic control of productive resources, freed from the tyranny of the economic laws that operate wherever there is production for sale on a market. Humans are capable of integrating themselves into a stable ecosystem and there is nothing whatsoever that prevents this being possible today on the basis of industrial technology and methods of production, all the more so, that renewable energies exist (wind, solar, tidal, geothermal and whatever) but, for the capitalists, these are a “cost” which penalises them

Another important point not to overlook is that we are seeking a "steady-state” economy or "zero-growth" which corresponds to what Marx called “simple reproduction” - a situation where human needs were in balance with the resources needed to satisfy them. Such a society would already have decided, according to its own criteria and through its own decision-making processes, on the most appropriate way to allocate resources to meet the needs of its members. This having been done, it would only need to go on repeating this continuously from production period to production period. Production would not be ever-increasing but would be stabilised at the level required to satisfy needs. All that would be produced would be products for consumption and the products needed to replace and repair the raw materials and instruments of production used up in producing these consumer goods. The point about such a situation is that there will no longer be any imperative need to develop productivity, i.e. to cut costs in the sense of using less resources; nor will there be the blind pressure to do so that is exerted under capitalism through the market. Of course, technical research would continue and this would no doubt result in costs being able to be saved, but there would be no external pressure to do so or even any need to apply all new productivity enhancing techniques. And we can set out a possible way of achieving an eventual zero growth steady state society operating in a stable and ecologically benign way. This could be achieved in three main phases.

First, there would have to be urgent action to relieve the worst problems of food shortages, health care and housing which affect billions of people throughout the world. There would be need for an immediate increase in the volume of production of many kinds of goods to relieve those people who were suffering from the effects of the old system and to supply the needs of those who were in the process of transferring themselves from obsolete to useful occupations. For example, the agricultural parts of the world, freed from the restraints of the present money-based system would pour out the abundance of health-giving foodstuffs to feed the half-starved populations of the world. Secondly, longer term action to construct means of production and infrastructures such as transport systems and for the supply of permanent housing and durable consumption goods. For the first time, the conditions would exist for turning into reality the beautiful plans for housing people in real homes instead of the sordid slums which the present social system has called into existence. These plans exist today - on paper - and will remain so, while it is necessary to have money to get a decent home. Released from the money-necessity, architects, builders, designers, artists, engineers, and scientists would be enabled to get together to build towns, homes and work-places which would be a joy to live and work in, a job at which even today their fingers are itching to get. How long this period would last depend on the size and mess left by the present system. We don’t think it would take very long since we have seen how quickly even the obstacles of the present social system can be overcomed and how backward countries can be developed by modern industrial methods. It should not, therefore, take very long for those parts of the world which are already highly industrialised to turn out enough goods to make the whole of humanity tolerably comfortable as far as the fundamental necessities of life are concerned. Thirdly, having got rid of the worst relics of the old order, production would then be adjusted so that there could be an eventual fall in production, and society could move into a stable mode, making due provision by storage for the possible natural calamities such as earthquakes.This would achieve a rhythm of daily production in line with daily needs with no significant growth. On this basis, the world community could live in material well being whilst looking after the planet. Socialism will seek an enviromental friendly relationship with nature. In socialism we would not be bound to use the most labour efficient methods of production. We would be free to select our methods in accordance with a wide range of socially desirable criteria, in particular the vital need to protect the environment. What it means is that we should construct permanent, durable means of production which you don’t constantly innovate. We would use these to produce durable equipment and machinery and durable consumer goods designed to last for a long time, designed for minimum maintenance and made from materials which if necessary can be re-cycled. Many consumer goods are used occasionally. Perhaps sharing them in a neighbourhood will replace the idea that everyone needs one of everything. This will reduce the number of these items required. That means reduced production. In this way we would get a minimum loss of materials; once they’ve been extracted and processed they can be used over and over again. It also means that once you’ve achieved satisfactory levels of consumer goods, you don’t insist on producing more and more. Total social production could even be reduced. This will be the opposite of to-day's capitalist system's cheap, shoddy, throw-away goods with its built-in obsolescence, which results in a massive loss and destruction of resources. 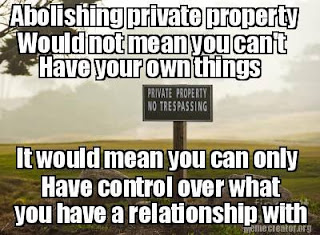