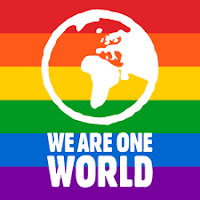 The Glasgow Mardi Gla Pride march has been organised by the LGBT Co-op.
The parade of walkers and decorated floats is set to leave Kelvingrove Park at 11:30 BST.
They will make their way from Kelvin Way to Sauchiehall Street, Blythswood Street and West George Street before ending up in George Square.
As they reach the central square, they will see the distinctive rainbow flag, adopted by the Pride movement, flying above the Glasgow City Council chambers.