Briefly stated, the Socialist Party proposes that workers use their huge numbers at the polls to outlaw capitalist ownership and to make the means of social production the property of all the people collectively. For our fellow-workers who is troubled by the disintegration of society and the multiple perils of armed conflict, climate chaos and class conflict there is no higher contribution to the cause of social sanity than a serious study of the principles of the Socialist Party to understand the abolition of the outmoded capitalist system and the triumph of the class-free, democratic socialist commonwealth.

The Socialist Party tells the story of a robbery so colossal that it defies the imagination. Compared with it the loot taken by all the pirates of history are a mere bagatelle. The robbery is continuous and unremitting, wherever society is divided into classes, wherever one class owns the means of production and distribution to which another class, owning no tools of its own, must have access in order to live. There is nothing illegal about this robbery. Under the capitalist system, it is considered the normal "way of life." But it is robbery nonetheless. For the capitalist class uses its ownership and control of the factories and land, in the same way that a highwayman uses his gun -- to extract a tribute from its victims. It is an insidious form of legalised theft, this capitalist exploitation.

Workers labour under the illusion that the capitalist supports them, whereas we support the capitalist. What goes on inside the workplace that conceals the true state of affairs? What happens is simply this: In the first few hours on the job the worker produces in the form of new values as much as he is paid in wages for the entire working day. The worker has little way of knowing this. When the serf of feudal times was forced to yield part of what he produced to the feudal lord, he knew he was being robbed. But capitalist robbery is more subtle. The worker may perform but one minute operation in the production of a commodity requiring thousands of operations. Nevertheless, the labour has created new value equal to a day's wages in the first hour or two on the job. and this new value -- together with the value added by fellow workers -- is embodied in the finished product.

What in the degree of robbery, or exploitation? It varies as conditions vary in the different countries. In a country where more advanced techniques and methods of production are applied (such as the United States), the degree of exploitation is greater than it is in less advanced countries. At first blush this may seem contradictory. Why, you may ask, should workers who are more productive receive less proportionately of what they produce than workers who are not so productive?

The answer is simply that wages are not determined by what the worker produces. Leaving aside their temporary rise and fall due to fluctuations of supply and demand in the labour market, wages are determined by what it costs the worker to live and raise a new crop of wage slaves to take his place when he dies or is thrown on the scrap heap.

But, note this: The more highly developed a nation is industrially, the less labour time is required to produce the workers' necessities. Hence, instead of the workers' share of their product increasing proportionately as their productivity rises, it is the other way around. As new methods and techniques -- such as automation -- are introduced, the articles workers consume are cheapened and wages fall accordingly. Thus the workers' relative wages (what they receive in relation to what they produce) tend to fall as productivity rises. In other words, as labour productivity rises, the necessary labour time grows shorter, thus lengthening that part of the working day when the worker produces surplus value.

HOW THE CAPITALISTS DIVIDE THE LOOT

Apologists for capitalism sometimes try to refute the Socialist Party's charges of high-degree exploitation by pointing to the net profits of corporations. But socialists have never contended that the corporations pocket all the surplus value their workers produce. On the contrary, socialists point out that before a capitalist can count his net profits he must pay off the landlord, tax collector, banker, advertising capitalist, insurance company, and all the other parasites on parasites. By the time taxes, interest, rent, etc., are deducted, net profits of the immediate capitalist exploiter may be only a fraction of the surplus value of which workers are robbed. But this in no way disputes the fact that the working class is robbed by the capitalist class of wealth so vast that it defies measurement.

CAPITALIST HEADACHE: DISPOSING OF THE LOOT

Now, let us examine this thievery from another angle. We measure surplus value in dollars. But the workers do not produce dollars, they produce commodities -- and a commodity, Marx tells us, is an article that will satisfy some human want and that is produced for sale. Hence, before the capitalists can enjoy their plunder, they must first find buyers for it. If they don't get rid of their commodity loot, it accumulates the warehouses and production stagnates.

First of all, it is self-evident that the workers do not consume more than they can buy with their wages. And, as we have shown, this is just a fraction of what they produce. What happens to the remainder of labour's vast product?

A part is consumed by the capitalists in prodigal living. Some capitalists -- the plutocracy -- live in opulence surpassing that of kings, and often maintain not one palace, but many. In every city the capitalists form a community of super-consumers. They are the patrons of the night clubs, the purchasers of costly luxuries, the members of expensive clubs. Yet. despite their prodigality, the capitalists can use up in personal consumption only a fraction of the immense wealth created by labour and appropriated by their exploiters.

Another part of this wealth -- a much larger part -- is used up in running a huge, bureaucratic, capitalist political State.
Still another part of labour's surplus product goes into expansion of industry. But while this tends temporarily to relieve the glut, its ultimate effect is to increase the capacity to produce commodities, hence to produce surpluses.

Waste is another outlet for the wealth labour produces but cannot buy back. Some of the waste is incidental to the operation of capitalism. Take real estate transactions, for example. From the standpoint of economy these are pure waste. So is insurance. And advertising. None of these activities creates a penny's worth of value. Then there is the wanton destruction of surplus crops, and the fantastic waste involved in building hydrogen bombs and other weapons. And the waste of economic anarchy and duplication of effort.
Indeed, capitalism thrives best when waste is greatest. Floods, tornadoes, droughts, hurricanes and other natural disasters may ruin individual capitalists, but they are a veritable tonic to the capitalist system, for they help to use up surpluses.

However, such is the tremendous productivity of the modern working class that, despite prodigious consumption and waste, surpluses tend to accumulate, glutting the home market. The only outlet for this surplus is -- the world market.

Foreign markets are to capitalism what a safety valve is to a steam boiler. Continue to pump steam into a steam boiler that has no safety valve to release the excess pressure and, sooner or later, something will break. Similarly with capitalist production. Under a system of production for sale and profit, the foreign markets must drain off the surplus or it will pile up, cause economic stagnation at home, and, ultimately result in capitalist collapse.

All industrial countries are competing for a world market that, instead of growing larger, tends to shrink as economically backward countries industrialise and establish their own systems of exploitation. Inevitably the rivals in this economic war encroach upon each other's markets and sources of raw materials, creating international friction and hatred. For a time the weapons of trade -- tariffs, barter deals, import quotas, etc. -- are invoked. But ultimately such weapons are inadequate. The struggle that begins in commerce ends in -- WAR!

Capitalist rulers have no ears for the voice of Socialist sanity. For Socialism -- not the phony "Socialism" of Soviet Russia, which is really a system of bureaucratic despotism, but real Socialism -- would not only put an end to the periodic wars for capitalist survival -- it would also put an end to capitalist robbery of the working class. By raising the worker out of his commodity status to that of a free human being with a voice and vote in the administration of industry, by guaranteeing to every producer the full social value of the product, in abort, by replacing capitalist anarchy and exploitation with Socialist cooperation and harmony, the world could be made into a veritable paradise of peace and plenty.

But capitalist rulers, blinded by their class and material interests, reject this. Whatever betides, they choose capitalism with its inevitable struggle for world trade and raw material sources, with its inevitable war. Not even the hydrogen bomb with its threat of human annihilation can prevent this ultimate outcome if capitalism is allowed to remain the ruling principle of society.
What the capitalist rulers and bureaucrats are incapable of learning, the toilers of the world must learn.

There can be no peace without Socialism

The capitalist system is the first in which a surplus of useful things is looked upon, not as a blessing, but as a curse. Below are depicted the various methods whereby the capitalists dispose of the fantastic volume of commodities the modern wage-slave class produces. It is impossible, of course, to determine accurately the proportion of labour's product used up in waste, or through expensive living by the capitalists, or in other ways, and the drawing is intended to convey this only in general terms. It should also be noted that the workers are many, the capitalists few,, and, though the working class may consume more in living, its per capital consumption is but a fraction of that of its exploiters.

The capitalist class, as a class, robs the working class, as a class. The individual capitalist exploiter does not pocket the whole loot taken from the workers. Out of the wealth the workers produce come rent, interest, fees for insurance, advertising, etc., taxes and the "pay-off" for corrupt politicians and other hangers-on of capitalism who in one way or another serve capitalist interests. When workers read of the net profits of corporations, small or large, they should always bear in mind that these represent only a fraction of the total plunder. The "pie" above is suggestive and does not pretend to convey the real proportions in which labour's product is divided. 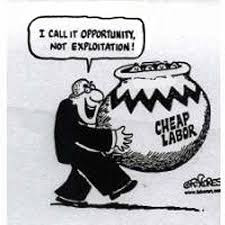