Socialism triumphs at the ballot box. 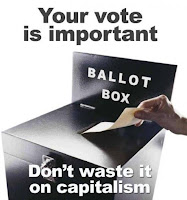 Men and women heed this: Mankind is literally in a race towards catastrophe. Recessions, mass misery, mental breakdown, corruption, the terrible threat of climate change and possible annihilation in nuclear war -- are signs of the instability of capitalist society. Such are the irreconcilable contradictions of the obsolete system of capitalism. But as obsolete and inhumane as it is, the capitalists want to preserve it.

Each new advance in labour-displacing technology (automation, Artificial Intelligence and robotics) further widens the gap between what the workers produce and what their wages will buy, thus hastening the onset of economic crisis and deepening its intensity. Defenders of capitalism say "new technology makes jobs." But as production is concentrated in highly automated plants, the cruel and devastating effects of automation on workers' jobs become apparent. These are the grim realities of capitalism. And all that the capitalists and their politicians can do about them is (a) increase and extend unemployment benefits such as the Universal Basic Income proposals (b) give some of the unemployed jobs on public works, (c) let the main body of the unemployed vegetate on welfare or relief. Capitalist handouts, whatever their form, are degrading. Jobless workers demean themselves before some bureaucrat in order to qualify benefits. Working families family are regimented that erodes their self-respect. Reforms cannot solve the problem. The capitalist system is the cause of mass unemployment. The interests of the overwhelming majority dictate therefore that capitalism be consigned to the garbage-bin of history, and that it be replaced by socialism, a social system capable of guaranteeing security for all. What stands in the way is (a) the outmoded system of private ownership of industry and (b) the workers' failure to see themselves for what they are under this system -- namely, wage-slaves, in bondage as a class to the capitalists as a class. Socialism means abolition of the wage system.

To end the curse of unemployment we must eliminate the cause of unemployment. We must replace private ownership of the industries with common ownership (the industries must be owned by all the people collectively). And we must replace production for sale and profit with a system of production for use. Instead of putting workers out of jobs, automation will shorten the work-day, work-week and work-year. Technological progress will no longer be something for us workers to fear, but an unqualified blessing that will ensure abundance and increased leisure for all. Socialism means democratic control and management of the industries and social services by the useful producers. In socialism, all authority is exercised by the useful producers.

If we are ready to accept the lessons of history, we shall fight the reaction by uprooting the cause -- the economic despotism, the capitalist system. Join with us in the great cause of human liberation - and to save civilisation from catastrophe. The Socialist Party alone shows the way out of the prevailing chaos and social anarchy. The Socialist Party calls upon the workers of brain and brawn to unite under its banner and vote the capitalist system out and socialism in. This is the peaceful method of effecting social change. And the Socialist Party stands four-square for peaceful settlement of the great social problem of our age. We seek to abolish poverty, insecurity, unemployment and war; we do not want totalitarianism in any shape or form.

Socialism is the direct opposite of capitalism. It means a completely new social order, with new administrative institutions through which to direct democratically the social production of our industrial age in the interests of all society. Socialism does not now exist, and it never has existed anywhere in the world. There will be no economic classes in Socialist Society. With the elimination of private (and State) ownership, the division of society into exploiting and exploited classes will end. Everyone will have the same basic material interests. In the class-divided world of today the primary consideration is: Does it pay? In the Socialist World of tomorrow the chief question will be: Is it needed, desirable and socially beneficial? In short, Socialism means production of things to satisfy human needs and wants and not, as under capitalism or bureaucratic statism, for sale and profit.

Private (and State) property and profit having been eliminated entirely, there will be no way for social parasites, capitalistic or bureaucratic, to exist. In short, it will no longer be possible for any individual or group to secure the economic power that would make possible the exploitation of another human being.With socialism we shall all be useful producers, collectively concerned with producing the most with the least expenditure of human labour. We shall collectively produce the things we need and want. New techniques and inventions, and the elimination of anarchy and waste in production, will greatly increase the wealth available. And such technological improvements will not result in unwanted surpluses and unemployment -- they will enable us to reduce drastically the hours of work. Socialism will, therefore, give us the leisure time to develop our facuities and live healthy, happy, useful lives. Even with the facilities we now have, merely by eliminating capitalist waste and duplication and providing useful work for all, we could probably produce an abundance for everyone by working four hours a day, four days a week, and twenty-four weeks a year.

In the organisation of the working class along the lines indicated lies the hope of humanity for a free and decent world, a world freed of the war-breeding struggle for capitalist markets, a world in which goods are produced for the use of the producers and not for sale with a view to profit. We want a world in which machines and scientific achievements will become a blessing to multiply our productivity and give us all leisure in which to study, travel and generally enjoy the fruits of our labor in peace and harmony in the universal Brotherhood of Man. Every person who loves liberty and hates despotism should study the principles of the Socialist Party. Socialism provides the foundation and shelter for the lofty aspiration of the cooperative commonwealth. There is no need for a so-called transition period. We can move into socialism immediately. There will be no class to hold down, hence no need of a political State. Socialism is the next logical and higher order of society. All historic forces, economic and social, point in that direction. And when socialism is achieved, the cause of mankind's most pressing problems -- war, depressions, crime, prejudice, global warming, etc. will have been eliminated. Socialism will be a society wherein we will make the fields yield an abundance without arduous toil; wherein the factories, mines, and fields, will be the safest, the most modern, the most efficient, the most sanitary possible, and productive beyond our wildest dreams without laborious toil; wherein our educational institutions will have the finest facilities and be devoted to developing complete human beings; wherein our medical and social services will concentrate on creating and maintaining the finest health and recreational facilities conceivable; wherein, in short, drudgery, poverty and social misery will be banished forever. 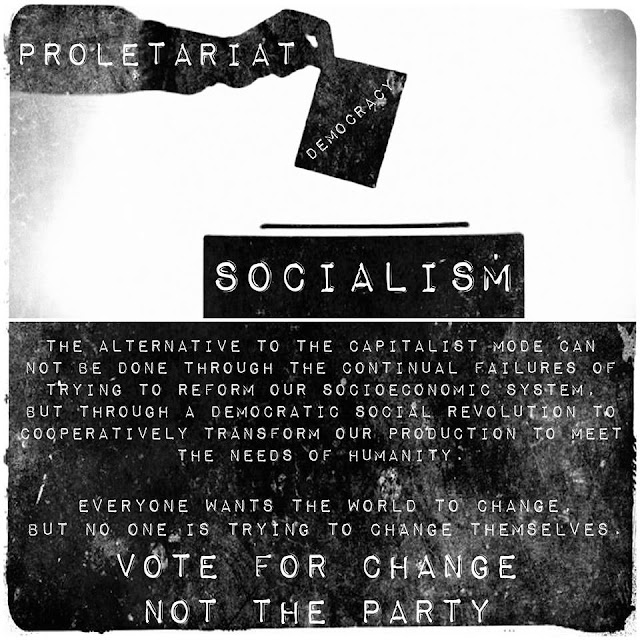