There is very little in Marx’s writings to be found of a detailed account of the new social system which was to follow capitalism. Marx merely outlined the broad features of the new society and the way in which it would develop. The first essential feature of socialism is that the of production are taken from private ownership and used for the benefit of society as a whole. In socialist society, where production is not for profit but for use, a plan of production is possible. In capitalist society, the capitalists own the means of production and engage in production for the sole purpose of making profits and satisfying their private interests. Therefore, though there may be planned production in a few enterprises, competition is rife and lack of co-ordination prevails among the different enterprises and economic departments as a whole. Adjustment based on a unified plan is completely out of the question and anarchy in all social production is the order of the day. Cyclical economic crises which break out in capitalist society are the inevitable result of anarchy in production. They not only greatly undermine the social productive forces, but also are disastrous for working people.

At the formation of the Socialist Party we made it quite clear as to our exact aim and object. We are socialists, wishful above all things to advance socialism, and by socialism we mean, as all socialists do, the common ownership of all wealth production on a co-operative basis, and this involves the complete supercession of the capitalist system. We recognise the class war between the propertyless class and the possessing class which can only be resolved by the complete control over all the great means of production and distribution by all of the people, thus abolishing the State and the wages system, and constituting a co-operative commonwealth or a social-democracy. We can only hope for and work for the best. When confronted with the forces of the capitalist State, it is futile to suppose that they will crumble, fall, surrendering their power and possessions to those who are both unorganised and confused in their objectives. We have no reason to suppose that people will be won over to socialism by those unwilling or unable to organise themselves.
Products socially produced by the workers must be owned by those workers and ordinary people. Then there is no barrier to restrict production. Production is no longer guided by profit of the handful of owners but by the requirements of the workers, who now own the means of production, and the other sections of the people around the workers. This is production for use and not for profit. The productive forces are released to serve people's requirements. Economic crisis is abolished because its cause is destroyed. This is the basis for socialism.
Commonly the word “socialism” is used as a political trick. The Labour Party and the left-wing groups are called “socialist”. It is suggested that countries with large welfare programmes are socialist or that nationalised industries are socialist. This has nothing to do with socialism. For ourselves, socialism must be the aim. Socialism as a description of the relations of men and women to production means ownership by the workers of the means of production, the relations of production are no longer an antagonistic fetter on the development of the productive forces. The social producers become the social owners. Socialism proceeds according to the maxim “from each according to ability, to each according to needs.” Along with that, the old coercive state apparatus of the exploiters is ended.

So long as society is divided into classes, in whatever form, the economics and politics as well as the ideas, culture, etc. of society will be dominated by one class or another–they cannot serve all classes, exploiter and exploited, oppressor and oppressed, master and slave, equally–and whichever class can in any period organise society in such a way as to most rationally utilise the productive forces at hand will hold sway for that period. What is needed is the most radical rupture with traditional ideas.

The aim of the World Socialist movement is the abolition of class rule and class conflict, with all their evil consequences, and the development of a society in which the few shall no longer be able to enjoy luxury and comfort at the expense of the toil and insecurity of the majority. This is today a thoroughly practical idea. So greatly have science and technology have advanced and increased our productivity that an abundance of all the good things in life for the whole population could be produced without subjecting any human being to drudgery or exhaustion. The continued existence of poverty is due solely to causes which rational social action can overcome. To assure plenty, leisure, and freedom for all, it is necessary that the existing private property system, the existing forms of economic control and distribution of wealth, be changed. Only by the socialised ownership and democratic control of productive wealth, doing away with exploitation and making the satisfaction of human wants the ruling motive in production, can the ideal of a class-free society be realised. The interest of the wage-working class, in the broadest sense of that term, imperatively demands this change

While it is impossible to prophesy with total certainty whether the change from capitalism to socialism will be a peaceful or a violent one, there are many forces at work which point to a genuine possibility of peaceful change in this country, and the World Socialist Movement should strive with all might to make this possibility an increasing probability as time goes on. In the name of freedom, in the name of civilisation itself, for the good of all those now alive and of generations yet unborn, we call upon the workers of the city and country as a class, upon all men and women, to join us in winning the new world which is within our reach. 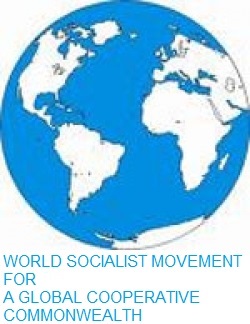