Obituary from the May 2005 issue of the Socialist Standard

We are saddened to have to report the death of our comrade Ronnie Edwards in March. When we learned of the seriousness of his illness the shock was all the greater because he had looked in fine health at the party’s Centenary Celebration in London last  June. He had joined the party in Glasgow in 1966 when only seventeen and immediately threw himself in to the branch’s activities in the city and elsewhere in Scotland.
In 1973 Ronnie moved to South  Yorkshire. His brother Freddie soon joined him and both quickly got involved with local comrades in organising party activities in and around Leeds and Doncaster which led to the formation of the former West Yorkshire branch. Ronnie was still doing all he could for the party until only a few months ago when illness laid him low.
The party has lost yet another stalwart, and we extend our deepest condolences to his wife Winnie, son Josh, and to all his family north and south of the border. 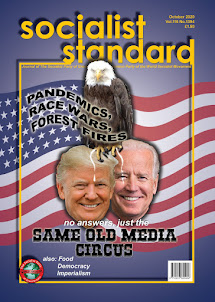