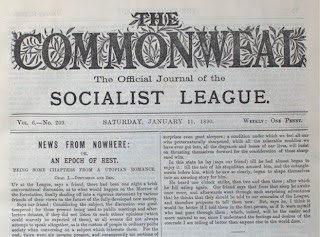 "We believe that to hold out hopes of amelioration of the condition of the workers, to be wrung out of the necessities of the rival factions of our privileged rulers, is delusive and mischievous." Letter of resignation from the SDF, William Morris

"Those who believe that they can deal with capitalism in a piecemeal way very much underrate the strength of the tremendous organisation under which we live… ; it will not suffer itself to be dismembered, nor to lose anything which is its essence…" - William Morris 1886

"The palliatives over which many worthy people are busying themselves now are useless because they are but unorganised partial revolts against a vast, wide-spreading, grasping organisation which will, with the unconscious instinct of a plant, meet every attempt at bettering the conditions of the people with an attack on a fresh side. "

"I believe that the Socialists will certainly send members to Parliament when they are strong enough to do so; in itself I see no harm in that, so long as it is understood that they go there as rebels, and not as members of the governing body prepared to pass palliative measures to keep Society alive."

“. . . it should be our special aim to make Socialists, by putting before people, and especially the working classes, the elementary truths of Socialism; since we feel sure, in the first place, that in spite of the stir in the ranks of labour there are comparatively few who understand what Socialism is, or have had opportunities of arguing on the subject with those who have at least begun to understand it; and, in the second place, we are no less sure that before any definite Socialist action can be attempted, it must be backed up by a great body of intelligent opinion – the opinion of a great mass of people who are already Socialists, people who know what they want, and are prepared to accept the responsibilities of self-government, which must form a part of their claims.” - Hammersmith Socialist Society , Statement of Principles, 1890

" This time when people are excited about Socialism, and when many who know nothing about it think themselves Socialists, is the time of all others to put forward the simple principles of Socialism regardless of the policy of the passing hour. I say for us to make Socialists is the business at present, and at present I do not think we can have any other useful business. Those who are not really Socialists - who are Trade Unionists, disturbance-breeders, or what not -
will do what they are impelled to do, and we cannot help it. At the worst there will be some good in what they do; but we need not and cannot heartily work with them, when we know that their methods are beside the right way. Our business, I repeat, is the making of Socialists, i.e. convincing people that Socialism is good for them and is possible. When we have enough people of that way of thinking, they will find out what action is necessary for putting their principles into practice. Until we have that mass of opinion, action for a general change that will benefit the whole people is impossible. Have we that body of opinion? Surely not. . .Therefore, I say, make Socialists. We Socialists can do nothing else that is useful, and preaching and teaching is not out of date for that purpose; but rather for those who, like myself, do not believe in State Socialism, it is the only rational means of attaining to the new Order of Things " - Commonweal, 15 November 1890,

"We had better confine ourselves to the old teaching and preaching of Socialism pure and simple, which is I fear more or less neglected amidst the said futile attempt to act as a party when we have no party

" I confess I am no great lover of political tactics, the sordid squabble of an election is unpleasant enough for a straight-forward man to deal in: yet I cannot fail to see that it is necessary somehow to get hold of the machine which has at its back the executive power of the country, however that may be done and that by means of the ballot-box will, to say the least of it, be little indeed compared with what would be necessary to effect it by open revolt; besides that
the change effected by peaceful means would be done more completely and with little chance, indeed with no chance of counter-revolution. On the other hand I feel sure that some action is even now demanded by the growth of Socialism, and will be more and more imperatively demanded as time goes on. In short I do not believe in the possible success of revolt until the Socialist party has grown so powerful in numbers that it can gain its end by peaceful means, and that therefore what is called violence will never be needed, unless indeed the reactionaries were to refuse the decision of the ballot-box and try the matter by arms; which after all I am pretty sure they could not attempt by the time things had gone as far as that. As to the attempt of a small minority to terrify a vast majority into accepting something which they do not understand, by spasmodic acts of violence, mostly involving the death or mutilation of non-combatants, I can call that nothing else than sheer madness " - "What we have to look for", Spring 1895

"As to mere politics, Absolutism, Constitutionalism, Republicanism. All have been tried in our day and under our present system, and all have failed in dealing with the real evils of life.
Nor, on the other hand, will certain incomplete schemes of social reform now before the public solve the question.
Co-operation so-called—that is, competitive co-operation for profit—would merely increase the number of small joint-stock capitalists, under the mask of creating an aristocracy of labour, while it would intensify the severity of labour by its temptations to overwork.
Nationalisation of the land alone, which many earnest and sincere persons are now preaching, would be useless so long as labour was subject to the fleecing of surplus value inevitable under the Capitalist system.
No better solution would be that State Socialism, by whatever name it may be called, whose aim it would be to make concessions to the working class while leaving the present system of capital and wages in operation: no number of merely administrative changes; until the workers are in a possession of all political power, would make any real approach to Socialism.
The Socialist League therefore aims at the realisation of complete Revolutionary Socialism, and well knows that this can never happen in any one country without the help of the workers of all civilisation." - Manifesto of the Socialist League, drafted by Morris and Bax and adopted in 1885

"As long as men are slaves, woman can be no better. Let the women's rights societies adopt that last sentence as a motto - and act on it"

"...the interests of the workmen are the same in all countries and they can never really be enemies of each other"

Irish Nationalism - would merely impose a "new tyranny" on the peasantry by turning them into "...a fresh Irish proletariat to be robbed for the benefit of national capitalists".

"Undoubtedly when there is a parliament in Dublin the struggle of the Irish people for freedom will have to be begun again".

"Of course , as long as people are ignorant, compromise plus sentiment always looks better to them than the real article."

"Intelligence enough to conceive, courage enough to will, power enough to compel. If our ideas of a new society are anything more than a dream, these three qualities must animate the due effective majority of the working people: and then I say the thing will be done."
By ajohnstone at May 18, 2020