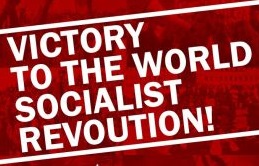 When the mines, the land, the factories, the laboratories, the workshops, the oil wells; the ships, lorries and planes and all the other means of production and distribution—when all these things are in the hands of society as a whole (not the state) there will be no grounds for antagonism.

It is an age of contradictions in which we live. Millions destined to slums or homelessness while builders are forced into unemployed uselessness because the market has no need for them. Stockpiles of bombs which will convert us into dust while Church and State preach to kids about the virtues of peaceful behaviour; the cries of millions of starving children who will die this year, as they do every year, in a society which is actually paying farm owners not to produce food.


The objective of capitalism is to make a profit. The recipients of profit are the capitalists who are, and always will be, a minority. The workers, who produce the wealth but do not possess it, are the creators of all profits, and that creation arises directly from the act of robbery which is inevitable so long as the wages system exists. Under capitalism the earth and all of its major resources belong to the few and not the many; production is by the many for the enrichment of the few. The position of the working class is that of wage slaves. Although sometimes the wages are called salaries, the slavery remains the same. The wage slave majority does not own or control the world. We are the second-rate citizens in a world which should be ours.

The socialist proposition begins at the point when you recognise that capitalism must go and the earth must belong to its inhabitants. Socialism has nothing to do with regulating capitalism or equalising social relations within it, or injecting illusory feelings of co-operation into it, or moulding or reforming it in any way. Socialism is not a process of playing with the surface image of the profit system. We are uncompromising enemies of the capitalist system. While it exists, in whatever forms, we fight against it. Socialists are not alone in this fight. Capitalism necessitates class struggle between capitalists and workers. The two classes have opposed interests and live in a condition of permanent tension which frequently erupts into class war in various forms. The difference between the socialist struggle and that of our fellow workers who are not yet socialists is that we know what we are fighting against and what we are fighting for. Too often workers struggle in the dark; they hate the boss, they seek justice, they place faith in reform schemes or other illusions. To become a socialist is to see through the dark and convert blind struggle into a movement for social revolution. The socialist proposition commences, then, at the point of seeing the need for fundamental social change; it proceeds to consciously prepare for revolution. That is the socialist task.


Revolution. Few words convey so many confused meanings. 1789 in France when a king was removed and a new gang of robbing rulers installed. 1917 in Russia when state capitalism was inaugurated in the name of socialism. 1968 in Paris when students imagined that barricade romanticism would transform history. When workers hear of revolution they think of bloody street battles conducted by people in period costumes. Alas, quite a few of those on the modern Left indulge in the same misconception. What is misunderstood by such people is that all previous revolutions were minority revolutions: they were political acts which transferred power from one set of rulers to another. We do not seek to put political power into the hands of new rulers. The socialist revolution will be the first revolution in history which will abolish rulers and ruled — which will end class society. In short, the task of class-conscious workers is not to "take power”, but to end class power by ending all classes. The aim of the working class must be to abolish itself as a class.

The socialist revolution will not be an affair of leaders and led. The concept of "the socialist vanguard", so well loved by arrogant would-be Lenins of the Left, is an idea borrowed from the politics of past revolutions. Workers will not be led into socialist liberation. We shall not, as a class, be told by leaders that they have very kindly emancipated us from capitalism and now we may cheer like grateful masses for being freed. Workers will not be freed, but must free ourselves. To quote Marx. "The emancipation of the working class must be the work of the working class themselves". The revolutionaries who make the revolution will know what we are doing. That is why the first prerequisite for the socialist revolution is consciousness of what needs to be done.

As the working class is the majority, and as there will be no socialism without a socialist-conscious working class, it follows logically that the revolution must be the act of the majority, not the minority. In short, it must be democratic. As socialism itself will be the most democratic form of society ever experienced by humankind, it follows that it can only be established democratically. A minority could not establish socialism in the face of a non-socialist majority of workers, and it would be folly to attempt such an adventure.

Once there is a socialist majority political action must be taken. The socialist revolution cannot be non-political. Why? Because we are up against the capitalist state and if we do not take it, it will take us. The power of coercion cannot be left in the hands of the capitalist class. Government and the armed forces must be taken away from them in the same way as they are handed over to them: by mandate. At present workers vote the power to rule over them to our class enemies every time there is an election. In the ballot box workers throw away their chance to be rulers over their own lives, offering such power to those who seek to govern on behalf of the bosses. The socialist never votes for anyone to rule over him or her, never votes for any capitalist party, even if it poses as "the lesser evil". The socialist vote is a class-conscious vote which is cast in opposition to the capitalist state in any form. This does not mean that we seek to establish a socialist state. On the contrary, the socialist revolution. in establishing workers' power over the state, will at the same time, put an end to the state. The state is an instrument of class coercion: where there are no classes there will be no state. The socialist revolution will bring about a stateless society.

World without frontiers
The working class is not a national class, but exists worldwide. Our interests internationally are not many, but identical. Workers everywhere are robbed of the fruits of our labour and only by revolution everywhere can the world become the property of all — or, more accurately, the property of no one. So, the socialist revolution knows no boundaries; it will not occur nationally, but internationally. That is why The Socialist Party is not concerned only with the workers of one state territory. In Britain we deal with the conditions here, but we are part of a World Socialist Movement, the other parties of which have the same principles as us. If the number of conscious socialists in one country is larger than in another, then it is the job of those where there are more socialists to offer every support possible to those where the struggle is more difficult. Whilst pointing out this identity of global working-class interest, and therefore the need for world socialist revolution, we do not ignore the many important cultural differences in which different workers find themselves. Also, we are not unaware of different obstacles which history has placed in the way of various national groupings of workers. It is up to socialists in each area of world capitalism to struggle for revolution in whatever way is best for them. It is not for workers in Britain to lay down precise revolutionary plans for our brothers and sisters who do not share our specific conditions. What they do share with us, and what is far more important than those factors which differentiate us, is a need to end world capitalism by means of joining the movement for world socialism. No nation can do that alone: national socialism is a concept to be thrown into the dustbin of discarded dogmas wherein lie the remnants of the Stalinist and Nazi abuses of the socialist label.

How is the socialist revolution to come about? The Socialist Party is in possession of no magic formula. Since 1904 this Party has, in a principled, persistent and uncompromising fashion, used all of the energy and resources at its disposal to make clear to our fellow workers that social revolution is the need of the day. Some workers have responded by joining with us. Others have nodded approvingly, telling us that they will be with us "on the day”. Most have dismissed our message. For some this dismissal is because they are convinced by the lies which prop up capitalism. But most of those workers who have yet to become revolutionaries have failed to be motivated because capitalism makes apathy an easier course than action. Sadly, millions of those politically apathetic workers, who over the years have come across the case for socialism and failed to be aroused, have suffered miserably for their apathy. Such suffering has ranged from the grinding frustration and insecurity of day-to-day wage slavery to the more evident horrors, such as murder in war and long-term unemployment and homelessness. The worker who avoids the call of revolution is a vulnerable worker. It is the job of The Socialist Party to point out, as we do at every opportunity, that socialism is not only a great idea about how human decency could be achieved, but is the only practical and immediately achievable alternative to the intense pain which capitalism is inflicting upon the wealth producers now.