Capitalist Ills Have No Remedy 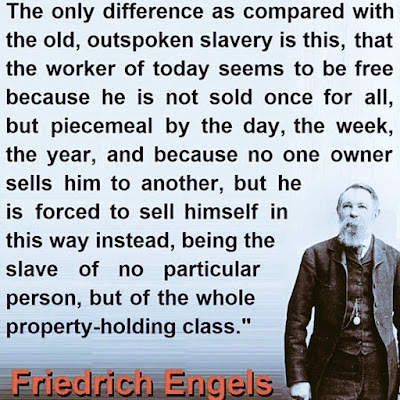 Labour power is bought and sold on the market at a price that has for its basis the socially necessary labour required for its production. The price of labour-power is arrived at by bargaining, and as the capitalist is in possession of the means of production, it is obvious that he is enabled to dictate, within limits, to the seller of labour-power. The Socialist Party is continually pointing out to our fellow-workers that the interests their leaders serve when they tell us to produce more are the capitalists' interests, whether advocated in ignorance or with full knowledge of the effect does not matter, for as a rule the more the workers produce the sooner are they unemployed. Karl Marx made this clear and explained the process of the robbery in Capital, in which the true nature of capitalism is revealed as resting upon the exploitation of the working-class through individual or private ownership of the means of producing the necessaries of life. This divides society into two distinct classes whose interests are as widely opposed as the two poles of – the earth: one a propertyless class having nothing to sell but its power to labour; the other a wealthy class owning the means of wealth production.

Many workers of all nationalities who have passed through worse than death, now realise that the cult of nationalism is indeed tragic futility so far as the working-class are concerned; and the spirit of international co-operation and solidarity, though slowly, is surely growing up amongst them, born of the knowledge that they are poor because the greater part of the wealth they bring into existence is robbed from them by the capitalist class.

Among the capitalists, there is continual friction arising out of the competition for markets for the sale of commodities, each section trying to oust the other. World-wide territories are examined, trade routes determined, and all the machinery put into operation to secure a profitable sale; and a very watchful eye is kept by their respective governments upon the interests of those whom they represent. When these interests are threatened by trade rivalry of another state, bombing machines, gunboats and troops are hurried to Tom Tiddler’s ground to administer a gentle admonition to the offending party. All of which goes to prove there can be no peace, in either a military or economic sense, while goods are made for profit instead of use, and exploitation of the working-class forms the basis of society.

It follows then, as the day follows night, that if we would do away with war, we must destroy the conditions from which it has arisen. Not patch up or reform the old structure, but change the system entirely by doing away with wages and capitalism, and substitute a system of society in which the whole of the means of social production is commonly owned and democratically controlled in the interest of all. Then it will be impossible for anyone to deprive another of existence by withholding the means of satisfying his requirements.

In this way alone lies the path to peace. After all, it is not in the power of statesmen to end wars as they belong to the class to whom war is necessary and inevitable, and cannot but desire a continuance of a system that gives them such ease and enjoyment.

The workers alone can alter the circumstances that bring such untold misery and ruin to their homes, by organising for the complete overthrow of the wage system. Then only can there be peace throughout the world. How this is to be done will be found in our Declaration of Principles on the back of this paper. Read, mark and inwardly digest them.

Is it not time you looked into the condition under which you live? Only when you do so, will you be on the way towards understanding your present function in society, and the outcome of such knowledge will be a revolutionary attitude towards your exploiters and their system. You will no longer look to leaders; it will be clear that your interests and the capitalists can never be reconciled. Under capitalism, every improvement in the methods of production tends to worsen the workers' conditions; the tools producing wealth in abundance become a menace and a terror to them. Under capitalism, there is no remedy. When the workers understand the position they will capture the political machine and use it as an agent of their emancipation, and make all the means whereby society has to live the property of the whole of society. The machines that today are a menace to the happiness of countless millions will then be the means by which all shall attain leisure and happiness.

Parliament is but a consultative body of capitalists which meets for the purpose of determining the most economical way of appropriating the results of working-class effort and apportioning shares of the spoil to the various capitalist sections whom they represent.