What We Want and Why 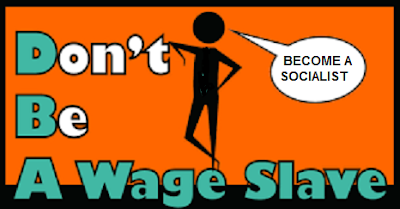 Apologists for capitalism argue that members of the capitalist class work also. This may be true in a few instances, but not for the giant concerns which produce most of the wealth in modern society. The shareholders in these companies take no part in production at all.

And it is argued that the large shareholder with investments in dozens of different companies earns huge dividends because of the organising ability. It is impossible for one person to have the knowledge of the complicated processes involved in running one company, let alone trying to run several. The capitalist class employ workers to do their organising for them and even employ members of the working class to advise them how to invest their money.

Another argument put forward is that the capitalist class are entitled to their large profits because of the risks they take with their investments. What risk is involved in buying State bonds? And in these days of “increased” crime is the person who keeps money at home not taking a bigger risk of losing it? And what about the meagre compensation the working class receive though they risk their lives and health in such industries as mining, transport, etc.

Another aspect of the “risk” argument is that for saving money and sacrificing present pleasures the capitalist must have some recompense. To talk of  Bezos, Zuckerman or Musk foregoing pleasures because of their investments is absurd. Again to abstain from the pleasures of present spending is to indulge in the pleasure of making more money for future spending.

The Socialist Party is frequently asked why it is not in favour of, but actually opposes various forms of state or municipal ownership. Our general reason is that nationalisation will not benefit the workers.

The employing class after they have paid wages and all expenses, they expect to receive an amount greater than the total they have spent on manufacturing and selling a product. The difference between income and expenditure goes into the pockets of the owners or shareholders as profits or dividends, and this happens irrespective of whether those shareholders have or have not any business knowledge and irrespective of whether they spend the whole of their time idling and enjoying themselves, or whether they take an active interest in the concern in which their money is invested. Generally speaking, the amount of their profits depends not on their own efforts, but on the amount of capital they happen to possess.

We object to the control of the means of life being in the hands of non-workers. We object to the owners of capital being permitted to consume part of the wealth the workers have produced while they take no active part in production themselves. We hold that society can now dispense with the capitalist class, because they no longer perform any function which cannot be performed at least as well by members of the working class, by which we mean all those people who, because they do not possess property, are compelled to offer their services to those who do. We do not regard the investment of capital as a service that entitles the owner to live at the expense of those who do the work. We, therefore, advocate socialism. Society itself will set aside wealth in the form of machinery, etc., for the purpose of future production, instead of paying a privileged class for permission to use the results of the workers’ past labour, as is done at present. The capitalist class will cease to exist. This is what we mean by socialism.

On the other hand, nationalisation, or municipalisation, is when the State or some local authority assumes ownership or control instead of leaving it in the hands of any private capitalist or group of capitalists who choose to invest their money in it. They all perpetuate the very features which is essential to capitalism and which leads us to seek the abolition of the system. We know very well that it is the system itself that is the cause of the chief economic evils from which the workers suffer. Capitalism is the enemy; not big capitalists or little capitalists, not the private employer or the government bureaucrat, not high wages or low wages, not private or state capitalism, but simply capitalism. The essential feature of capitalism is reproduced in nationalisation proposals. IN ALL OF THEM THE CAPITALIST INVESTOR IS STILL GOING TO BE ALLOWED TO LIVE OFF THE PROCEEDS OF HIS INVESTMENT. The only difference—a minor one—is that he will receive interest on government or municipal bonds instead of receiving profits or dividends on ordinary company shares. He will still be able to live without working, and the system which permits this will still be the capitalist system. It is merely another reform of capitalism. We do not believe that there is any fundamental distinction so long as the wage system exists, between the relationship of a private employer to his workers and the relationship of a municipality or State to its workers. In each case, the latter sell their labour-power, and their capacity to sell it at a fair price depends on their capacity, through their trade unions to refuse to work.

The main underlying cause of the worker’s poverty is the private ownership of the means of producing material wealth. The class that lives by owning, maintains its position because it controls the political machinery and can invoke the aid of the armed forces whenever necessary. The remedy can only be the abolition of private ownership

There is a way out. The Socialist Party knows the answer.

The solution for the working class is the abolition of production for profit. Production solely for use is the answer. It needs, however, a majority of the population to take the necessary action. The Socialist Party spends time and energy promoting the socialist case because we know that unless the majority of people understand and take the necessary action, we can, by ourselves, do nothing to end the present state of affairs. Social production with private ownership can never provide for the needs of humanity. The wages system always prevents the distribution of goods, for demand is restricted by the ability to pay. Social production with common ownership is the only way in which distribution can be arranged to satisfy mankind. It is the establishment of common ownership of the means of production and distribution which the Socialist Party is striving to obtain.