The enemy of the worker is the master 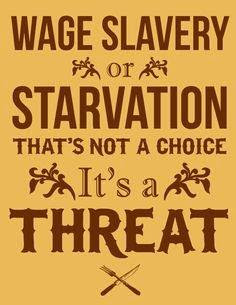 Socialists take every opportunity of examining and commenting on all the facets of capitalist society, including that much-publicised field, at the moment, anyway, trade unions. We oppose all other political parties, but when dealing with trade unions the fact that the leadership of any particular union has a political bias does not affect our judgement of their activities in the industrial field. As good or as bad as they may be, we recognise that trade unions are the weapon of the working class in the field of industry, and we, therefore, support the principle of trade unionism. We have this to say to trade unionists. Your right to strike has been bitterly fought for in the past: be careful that you protect it in the future.

Only when industry and transport etc, are owned and democratically controlled by the whole community can service to the whole community be a reality. Nationalisation or state capitalism is not the solution to the problem. The immediate task of the workers is to study the structure and origin of capitalism and to learn that there are no shortcuts to emancipation; that the solution of the problem of poverty in every industry and in every continent is the same—the abolition of the system of society which requires that the great majority shall be poor in order that a favoured few may live idle and luxurious lives.

Capitalism can be replaced by a system of society in which technical developments of machinery, inventions and discoveries will benefit you instead of rendering your position more insecure; in which education, real education, will be within your reach; in which poverty will be a memory and nothing more. It can be done, but your rulers will not, and your leaders can not do it for you. You must do it yourselves. When you understand the system you can end it. It is a slow and difficult task to remove from the mind of the typical wage workers the pathetic belief in the inevitability of their sufferings, and in the permanency of political institutions and economic forms of society; but there is only one way, the educational way, and to think of challenging those who are now in control, before this educational work has been accomplished, is mere foolishness. Knowledge of the evolution of human society, and of the origin and development of existing political institutions on the one hand, and knowledge of the present economic structures which makes possible the exploitation of the workers, exploitation not superficially observable, are the necessary forerunners of successful organisation for the emancipation of the workers.

There is a notion widely held in certain circles that capitalism is in a state of collapse, or at least, that its collapse is imminent; and this is interpreted to mean that the existing system of society will reach a point at which the production and distribution of commodities will cease, and the whole of the mechanism of society will fail any longer to operate. Those who propagate this conception naturally accept the view that the tactics of the working class organisation must be framed with this collapse always in mind. It is of no use waiting for the system to collapse, nor preparing a new economic structure to replace it. It will not go until the workers determine that it shall go, and the pressing service revolutionary organisations can perform is to prepare the workers' minds for the possibility of the immediate establishment of socialism. When the workers understand the social system, their exploitation, and their relation to the capitalist class, they will organise for the specific purpose of capturing the machinery of government from the capitalist class, in order that they may build a new social system based on the common ownership of the means of wealth production, under the protection, it will afford. The workers have the remedy for their sufferings in their hands; only when they are class conscious will they use it. Only those organisations can effectively wage war on capitalism which is composed of members who recognise the class struggle is fundamental; who realise that socialism is the only hope of the workers, and who know the lines of their struggle, and the result to be achieved by their activities.

Working-class organisations have always (but especially during and since the war) suffered from acts of treachery committed by leaders in whom confidence had mistakenly been placed. Hardly a strike or lock-out of considerable size occurs but there is some trade union official who, from sincere or other motives, deserts, or counsels action useful only to the other side. Each of these defections raises a little storm of protest and much vowing of "never again" among the active rank and filers; but the storm dies away, the incident is soon forgotten. The Chartist paper, the Northern Star commented:

"It is better at all times to submit to a real despotism than to a government of perfidious, treacherous and pretended friends."

The Chartists alternately supported Whigs and Tories, sometimes neither, and sometimes both together. In the Northern Star, on June 12th, 1841, were two leading articles advising opposite policies.

Socialism will be achieved by socialists; by the deliberate action, that is, of those who, understanding. what is at the root of the present evils, know what is necessary for their removal. The existence of a considerable proportion of convinced socialists precludes the possibility of swaying the electorate by emotional appeals. Without ignorant emotionalism, there is no need, no possibility, of political leadership, whether from a traditional ruling class or from a minority of superior intellects. Political bargaining exists because socialist knowledge is lacking. Without such knowledge, neither the leftists nor anyone else can give you socialism. Do not, therefore, waste time trying to dragoon the working class into striving for an object which they do not understand.

HELP US TO PROMOTE SOCIALISM.