We live in a system of society which by general agreement is known as capitalism, and whose outstanding features are private property and wage-earning. A few fortunate individuals are the owners of the land, transport, factories and other means of production, and the non-owners have to work for a wage in the service of the owners of property. Society is divided into a class of workers who must work to live, and a class of capitalists who can live without working. We know from everyday experience that there is no wealth without work, yet the workers are poor and the non-workers are rich. The Socialist Party says that the poverty of the poor and the riches of the wealthy are the results of the system of private property, and the only remedy is its abolition. We do not condemn the capitalists as “wicked” because they live by exploiting the workers, but we do regard private property as no longer necessary to society. We shall, therefore, deprive them of their property. Whatever services the capitalists may have rendered in the early days of their system in directing industry and as the medium through which accumulations of capital were made, they render needful services no longer. Society can manage now without them, but they still continue to levy tribute on production to which they make no active contribution. It is now a quite normal capitalist practice for the property owner to be, in fact, and in the eyes of the law, a passive investor without knowledge of the industry or the right to share in the management. Occupying this position it is possible for the wealthy to live in luxury and yet grow continually wealthier. The capitalist is interested in production only from the point of view of the dividend-receiver.

A proletarian is one who possesses nothing but the power to labour and who, in order to live, sells that power to those who own and control the means of production and distribution, that is to the capitalists. As power to toil is bound up in, and cannot exist apart from physical being, we sell ourselves in the form of wages just sufficient to maintain a standard of life. Competition for jobs ensures that we shall not be able to demand more except for a limited period. The wage we receives includes not only the cost of living for oneself but also the cost of rearing a family, of providing children to replace us down the mine, in the factory or office for to-day the family is still the unit of society generally, and calculations of maintenance costs are made with reference to it, not to the individual. If a worker remains single, or limits the size of  family, slight improvements can be made but these are of small account.

This is the position of economic dependence in which the working class finds itself, but while the people who fancy they are the “middle class” would probably admit this as a correct description of the position of the other workers they do not recognise its application to themselves. But wherein does their position differ? Consider the small shop-keeper who regards him or her as independent, yet usually as much bound as any employee or sub-contractor. If a confectioner, for instanc, in effect, the employee of the producers, Cadburys or Nestles, just as much as if a worker in one of their factories being dependent on them continuing to supply goods to sell for a living. The publican, whose independence is even more illusory, is particularly dependent on the brewery company on the one hand and the condition of the labour market on the other. Lower wages mean less business.It is true that there are some workers do enjoy dividends from relatively small investments, but this does not alter their position in society, although it may colour their outlook on social questions.

The fundamental question is whether the individual is or is not compelled to sell one’s labour power in order to live. If compelled to sell services, then the position is that of the worker who must work or suffer privation, not that of the capitalist who is able to please himself, and who may, in order to escape the boredom of doing nothing, add to income by taking employment. The fact that money wages vary does not relieve the better paid worker from the same compulsion that presses on the lower paid. It may be mentioned that the tendency is for the variations between the different grades of workers to become less with increasing competition for employment. The simplification of labour processes, consequent on the introduction of improved machines and their standardisation, makes it easier for labour to be trained for any kind of employment, and this levels out wages.

The members of the so-called “middle class,” to the degree that they are really better off than other workers, therefore have just the same interest in destroying the evils consequent upon the wages system. As for the suggestion that the “middle class” are distinguished from the workers in being owners of property, statistics will show how much exaggerated the claim is.

Socialism will terminate once and for all the right of any individual to receive rents, profits, or interest by virtue of being an owner of property. The Socialist Party does not, of course, believe that it is possible to improve materially the workers’ position inside capitalism. That is the deadly work done by the Labour Party and reformists in making the workers contented with the private property system. 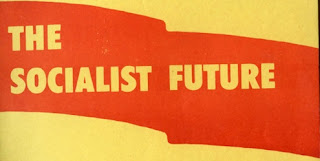