Capitalism comes in all forms 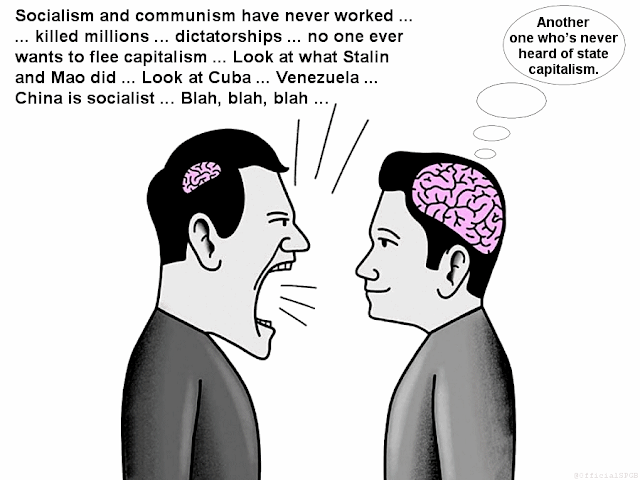 Getting something for nothing is the great anathema of the right-wing. They abhor the very thought of a single mom or a jobless dad on the dole, living off the government’s “welfare state.” Capitalism condemns millions to lives of poverty and despair just to enhance the worthless lives of a few. It is not the welfare queens or the “idle” unemployed who bleed society. It is the capitalist vampire that is sucking the working class dry. Speaking on behalf of the capitalist class, the intellectual lackeys answer that workers have been asking for, and getting, too much, from the government. Workers have demanded too much improvement in air and water quality, too much job security and safety, too much retirement pensions, too much health care, too much protection from racism, too many holidays, too much pay, etc. Gone are the days of expanding State spending on social services. Economic austerity is the order of the day.

Getting something for nothing is what capitalism is all about and it is what capitalists do best. Indeed, that is all they do. Capitalists do not earn, or create, or build anything. They live by profiting from the work done by others. They live off the labour of the working class. The names these two classes bear tell the story. Workers work and capitalists capitalise on the work that workers do. Capitalism exists and can only exist as a system of exploitation. Capitalists are the exploiters and workers are the exploited.

Working people are being victimised by an array of absurd contradictions. Basic needs like housing and health remain unmet while billions of dollars are being spent on the military and the armament industry.  While millions of working people suffer poverty goods that could serve their needs sit in warehouses, inaccessible to the working people who need but can’t buy them. Education, transport and other social services are being curtailed or eliminated for “lack of funds.” Less spending citizens generally means higher budgets to protect capitalist investments. Profit-motivated production and private ownership of the economy are the hidden causes of our misery and current divisive policies are fostered to increase competition among workers for the limited number of jobs and restricted access to social services that capitalism has to offer. In this way, the ability of workers to mount a unified defence against enforced austerity is crippled.

The needs of workers are never met. This is so because the capitalist economy does not operate to meet workers’ needs. It operates for capitalist profit. That profit is generated through the exploitation of working people—that is, by paying workers wages that amount to only a fraction of the wealth they collectively produce. Profits are made not primarily by cheating in the market or arbitrarily adding a “profit margin” to the price of a commodity. Instead, they come from appropriating at the point of production the greater portion of the values labour creates.

A socialist economy is based on the common ownership of industry. Production would be for social use instead of for private profit. Through representatives elected by workers where they work, they would democratically administer the industries and make all economic decisions. Resources would be allocated and production would be carried out on the basis of social needs and wants. A socialist economy would thereby free society of the limitations now imposed by capitalism. Such a society will not, of course, come into existence by itself. If the working-class majority is to become master of the economic forces, rather than its victims, workers must organise to gain control from the capitalist class to lay the foundation for a socialist society. Working people must break with the political parties of the capitalist class and independently organise politically around their common class interests for the transformation of the present economy into a socialist economy run by, and in the interests of, working people.

In regards to the environment, despite their lip-service, industrialists and politicians utter not a word about the waste and destruction of raw materials and natural resources by the anarchy of capitalist production—its unplanned, irrational duplication of effort in a mad, competitive drive by each capitalist to “capture” the market—or the bulk of it—for his corporation. Not a word is mentioned about the manner in which every corporation is trying to exploit the existing circumstances to destroy its competition and entrench itself more solidly as one of the few that control the overwhelming proportion of the nation’s resources and wealth. Nor a word said about the incredible waste and destruction, not only of finite resources but of human life itself, through capitalist wars and continuous preparations for ever more destructive wars.

The issue confronting the peoples of the world is not the climate crisis that threatens to grow worse. Those are merely the effects of the issue. The real issue is, shall we continue to tinker with those effects or shall we get rid of their cause—the capitalist system and replace it with socialism—a system of social ownership, democratic management and planned production for use. The issue, literally, is survival. The harm and damage already done to all of us and to our environment by capitalism are beyond exact calculation. If it is not abolished and replaced with a viable Socialist Cooperative Commonwealth it will destroy itself. And there is the distinct possibility that it may destroy humanity and the world in the process.

That can happen, but it need not happen. And it won’t happen if all who realise the need for a socialist reconstruction of society join with us to appeal to our proletarian brothers and sisters of every race, of every colour, of every creed, to organise their latent political and industrial might as a class to accomplish the revolutionary change to socialism and thus guarantee the future safety and well-being of the human race. 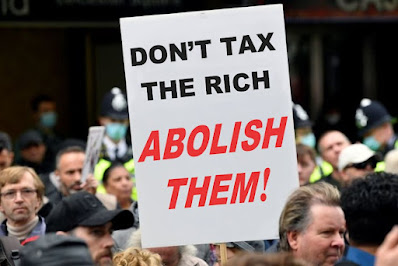