In these times of disease pandemics and economic and political plagues, there is fear, dread and anxiety that is triggering discontent and unrest among both right and left wings.

Unlike many Catholic theologians in regard to the Pope, the Socialist Party claim no infallibility for Marx. We claim only that he discovered a set of laws in the materialist philosophy which describes the changes which have occurred and will occur in man’s evolution. Marxism is not laid down only in the books and writings of Marx and Engels but is above all incorporated in the movement of the class-conscious workers’ movement. Mankind has been transformed many times in the course of history. From barbarism to conditions that existed under feudal society, to what we can see today.

Socialism is not a dogma but is a system of ideas that tells of world society without classes, a society of abundance. The changes in the mode of production, and with it the change in the relationships of men, will eliminate greed and the other driving motive forces under present-day society and replace them with entirely different ones. With that, man will begin to undergo a great transformation.

In practically every country, city and community, there are people involved in issues and struggles to improve their situation or stop injustices that they face. These struggles involve not just socialists or political activists but many different people, ordinary working people. These various struggles are important and can make a big difference. While reforms are important, we believe that no amount of reform of the present system can offer any lasting improvements, security or stability for the working peoples or fundamentally alter their position in society. While some fight for the immediate improvement of the people’s well-being, the Socialist Party has the long-term interests of the people and the long-range goal in mind which is to build towards revolution.

By revolution, we mean the overthrow of the capitalist ruling class and the basic economic system of society. We believe a revolution is necessary because the problems of this society – the economic problems of inflation and recession, social ills – are all the product of the capitalist system itself. The basic nature of capitalism is that while the vast majority of people work and produce the wealth of society, a handful of owners control all the wealth – the factories, mines, transport and farm fields, and all the profits that are produced. The ruling class prosper at the expense of the vast majority of the people, and their constant drive for profit and more profit results in only more problems and suffering for the people.

The socialist revolution will take the basic means of production from the hands of the capitalists, and turn these into common property. Working people will hold economic power and political power, and will use it for the benefit of the working people and not their detriment. Exploitation will be eliminated and production will serve the needs of the people. The profit motive of the capitalists will no longer determine everything, problems can be handled in a rational way according to the actual interests of the majority.

What does socialism mean? Among the many written and spoken statements and explanations about socialism, one encounters very different answers, each according to the attitude which the author takes to the socialist movement.

The people who oppose socialism attempt to imprint on it all possible folly and horror, in order to scare people away from any serious study of socialism. Covering up capitalist exploitation is precisely the main job of reformism. They slander the advocates and adherents, to the best of their ability.  If you meet someone, who is anti-union, who is anti-worker and anti-socialist, you can guarantee, that person will turn out to be racist,  turn out to be an anti-semite, and turn out to be anti-foreigner.

They depict a distorted picture of the socialists and their aim, socialism. It is pointless to quarrel over who invented the word other than very quickly it entered the language as the name for a certain form of human economic activity, for a particular mode of production.

To business owners, working people must sell their labour-power. To these business owners belong the products which are produced by the propertyless wage earner and which in the end will be consumed by those who are in a position to buy the commodities. So today it is precisely the private ownership of the means of production that gives to the owner the possibility to take hold of and turn to account the product of others' labour namely that of the actual producer.

The means of production have become capital and their owners' capitalists. Hence the powerful class divisions in the world: the class of wage earners, who to maintain their poverty-stricken existence have to produce, day in and day out, for the capitalist class, the owners of the means of production, who with the growth of the productive powers of human labour accumulate ever greater wealth. The accumulation of capital must, out of an inner necessity, drive capitalism into its crises.

This capitalist mode of production shall be replaced by the socialist model. With socialism, the means of production, land and soil, quarries and mines, raw materials, tools, machines, transport, will be transferred to the common ownership of society. They shall no longer serve individuals as a means of living off the labour of others, no longer be the means of the economic enslavement of the propertyless. Commodity production of independent private producers is changed into a planned social production by the people and for the people. And through it will be engendered the greatest possible wealth for the enjoyment of life and the cultural development of all members of society.

Socialism will bring about the greatest possible good for all members of society, the most wonderful cultural blossoming. It makes impossible all forms of exploitation of man by man, but, on the contrary, secures for each individual the maximum all-round development of talent. So cannot socialists be described as the "true Christians" in the sense of the genuine brotherhood of mankind, loving thy neighbour as thyself?

Socialism today is in the main the description of a social order which is founded upon the common ownership of the means of production. Socialism is indeed that of a world outlook. Liberal intellectuals will at the most accept certain views from Marxism, yet treats Marxism as a patchwork, an isolated scientific phenomenon to cherry-pick particular passages. Marxism or socialism is a universal science. No cloud-cuckoo-land speculation over mystical and supernatural ideas, but rooted deep in the world outlook of historical materialism, by which mankind seeks clarity about nature and the development of the visible world around, not as fixed and unalterable, but as a process of change.  The liberation of the working class - is a distinctly political task and consequently, we have the doctrine of class struggle. 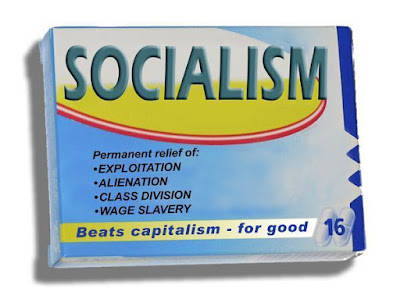