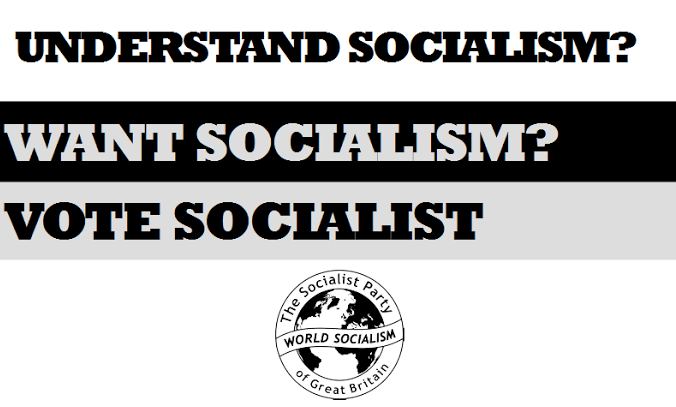 Capitalism everywhere is incapable of solving social problems which itself has created. The State is an organised power of oppression. The capitalists have control of the government and that government grants them the right of ownership. The curse and the tragedy of the workers’ movement consists in this, that the ruling class have been able to create divisions between workers of different nations and so called 'races'. The Socialist Party explain to our fellow workers the nature of the struggle in. which they are participating and tells them of the principles for which we hold to. We reveal why we are confident of the way out for our class from the horrid nightmare of the competitive struggle which sets nation against nation, class against class, and individual against individual.

The struggle between individual capitalists to realise profits sets employer against employer. The conflict between national groups of financiers sets nation against nation, and produces war. But despite their individual and national conflicts the whole capitalist class stands united in their common desire to exploit working people. Hence under capitalism the freedom of the working class consists in the freedom to starve or accept such conditions as are imposed upon them by the employing class. But the freedom of the master class consists in their untrammelled freedom to buy labour-power to create profit. Thus the workers are not free. Neither owning nor controlling the means of life, they are wage slaves of their employers, and are but mere commodities. We affirm that so long as one section of the community own and control the means of production, and the rest of the community are compelled to work for that section in order to obtain the means of life, there can be no peace between them.

While there are differences among  capitalists on the tactics to be deployed, they are united in their central aim of maintaining their ownership and control. While the worker is generally not class-conscious – that is, knowing and understanding his or her class subjection and its cause, and therefore knowing and understanding overthrowing the institutions which subjugates us – it is not so with the capitalists. They, as a rule, are thoroughly class-conscious. They understand it clearly and all the capitalists are lined up accordingly. The political parties accordingly follow a common line on the central issues. The Labour Party is committed to an all-out effort to make capitalism work indefinitely and prevent any collapse of capitalism.

There are kind bosses and tough bosses. There were kind slave-masters and cruel ones. The working class wants NO slave-masters and NO bosses. The Socialist Party wages war to end wage-slavery, to end capitalism with its evils of misery and degradation. until that war is ended we do not want peace—because such peace will be the peace of the beggar and the slave. The Socialist Party is opposed to every war but one and that is the worldwide war of the social revolution. It is its  purpose to wipe out, root and branch, all capitalist institutions of present-day society. It is distinctly revolutionary, and in scope and depth is vastly more tremendous than any revolution that has ever occurred in the history of the world.

The Socialist Party does not tolerate any cult of leaders. The reputation of a person as a member of a party may not be compatible with his or her character in personal relations. We have in our mind instances of persons who have been for years hard workers for the cause, whose party activities have been unimpeachable, but who are nevertheless sometimes awkward to get on with in private life. It is why we built the party where all power rest in its collective membership.

Such are the principles of the Socialist Party. Vote for their candidates and you vote and work for the building of the world anew. For the sweeping away of ignorance, for the full physical and mental development of men and women free from class exploitation, and the degradations of poverty. Decline, and by your apathy you stand for misery, exploitation, greed and war. The hour is great. The eyes of the world are upon you. The choice is yours.