The working class in society holds a special position. It has no property. It is a propertyless class—dependent upon the class which owns property—the land, the factories, mills, mines,communications and transport. But the land cannot give forth its fullness unless workers plough and sow and reap. The earth cannot deliver its mineral wealth unless workers dig it. Factories, mills, mines, railways, etc., cannot work unless workers are employed to make them serve their purpose in the transformation of nature’s wealth into social wealth. It is this fact which compels the owners of the means of producing wealth to employ labour. They need that labour or their ownership ceases to be of value.

Socialism is the name given to that form of society in which there is no such thing as a propertyless class, but in which the whole community own the means of production—the land, factories, mills, mines, transport and all the means whereby wealth is created and distributed to the community. The basic principles of socialist society are diametrically opposite to those of capitalist society in which we live. Socialism stands for social or community property. Capitalism stands for private property. Socialism is a society without classes. Capitalism is divided into classes—the class owning property and the propertyless working class.

Recognising the cause as rooted in the private ownership of the means of production and the propertyless conditions of the working class, the Socialist Party want all the struggles of working people to be co-ordinated, so that behind every  conflict there will be available the whole power of the working class. Socialists want sectionalism to be superseded by a united working class. The socialist revolution consists of the entire process, on a world scale, through which the socialist mode of production is established and supplants earlier modes of production. Socialism is a theory of a system of human society, based on the common ownership of the means of production and the carrying on of the work of production by all for the benefit of all. In other words, Socialism means that all such things as are necessary for the production of the necessaries and comforts of life should be the property of all. A cooperative commonwealth of fraternity, freedom, peace. 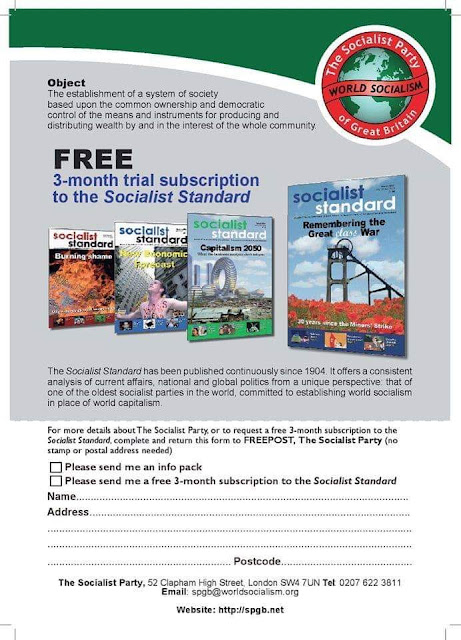