ScotRail to be nationalised

The SNP intends to nationalise Scotland’s railways next year.  The move comes after the Welsh government took the nation’s railway network into the government hands.

Train services had been underwritten by the Scottish government under emergency contracts since last March. Two major franchises in England, LNER and Northern, are already run by the government through its operator of last resort, and the Office for National Statistics said in 2020 that rail services had been in effect nationalised due to the level of Treasury support.

A yet-to-be-published review of Britain’s rail system by Keith Williams, a former British Airways chief executive, has already signalled the end of the traditional franchising system.

The unions are jubilant about the decision.

Kevin Lindsay, Aslef’s organiser in Scotland, said: ‘We welcome the beginning of the end of the failed franchise system here in Scotland. Never again should people’s railway ever be in the hands of the privateers.”

The TSSA general secretary, Manuel Cortes, said: ““The Covid-19 pandemic made it abundantly clear that our railways are a public service, not a piggy bank for fat cat shareholders.

The members of the Socialist Party collectively shrug their shoulders and say "So what?"

Another failed commercial enterprise is bailed out by the capitalist state and once again the rail workers have a State department as its employer. The train workers merely change one employer for another; little else is changed. How well did that do in the past? The railways have merely been transferred from private capitalism to State capitalism. 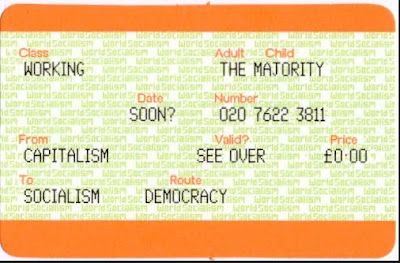