Which Side Are YOU On? 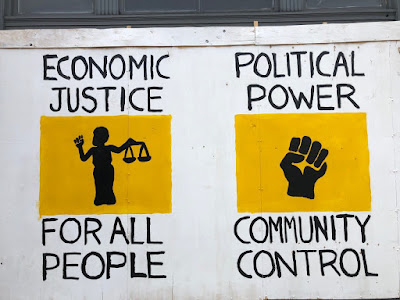 The socialist revolution has to be a worldwide phenomenon.  The mission of the Socialist Party is not to substitute one exploiting class for another but rather to rid humanity of all exploitation. The characteristic of the working class,  is that it does not own the means of production and that it is the object of exploitation. As a class, it has no other future but the total elimination of exploitation of man by man. This is why we can say that the movement for the emancipation of workers has to lead to the liberation of all of humanity. In attacking the foundation of the capitalist system – the private ownership of the means of production and wage labour – workers undertakes at the same time the elimination of classes themselves. The elimination of the private ownership of the means of production is to destroy the material basis on which all exploiting classes are founded. The Socialist Party’s goal  is the creation of a class-free society, i.e. socialism, a community in which no person exploits the labour of another which in turn leads to a state-free society. The total emancipation of workers is the socialist revolution. The abolition of the exploitation of man by man means first and foremost the total ban of the exploitation of the work of another person, i.e. the appropriation for personal ends of the product of another’s work. Thus it will be impossible for individuals to enrich themselves from the work of others. In this area, socialist society applies the following principle: to each according to needs, from each according to abilities.

While under capitalism, production is done solely in order to make profits for those who own the factories, the transport and the big chain stores, etc., in socialist society, production is planned according to the needs of all. Socialism is concerned about  the material and cultural well-being of the people. Production will no longer depend upon the wishes of a handful of capitalists whose only goal is maximum profits, but on the collective will of all  the people. Under capitalism the private accumulation of capital, the profit system itself, is the motor of the economy. Replacing the capitalist production of goods by the socialist organisation of production the workers have, above all, a collective interest of society as a whole as the priority.  Today, it’s possible to improve the means of production and the work process but this would merely give new wealth and new means of exploitation to those who oppress us. With socialism, new technology developments instead of resulting in either layoffs or increased exploitation it would be used to reducing the working time of the entire working class.

Many  groups, organisations and parties supposedly are dedicated to the struggle for socialism yet the mostly peddle the  same old bastardised reformist solutions for things. In fact, the only answers that these phony partisans of socialism ever put forward is collaboration with elements of the capitalist class. Working people must understand how to resist the facile and misleading mirages that the reformists dangle before their eyes. The entire history of the international workers’ movement shows irrefutably that the complete emancipation of the working people can be realised only if the great majority of the working masses rally to the proletarian revolution.

The Socialist Party  will make no concession on principles to anyone just for the sake of unity.