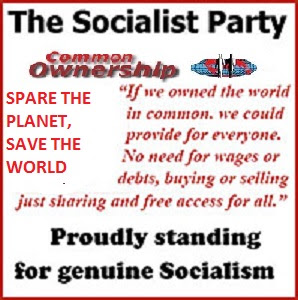 The hallmark of capitalism is that those who produce all the wealth—the working class—are exploited during the course of production by an owning class who pay them less than the value of what they produce. The profit which the employer obtains is the main objective of production. So, when workers ask for higher wages the employer must resist such claims in order to defend that profit. The inevitable antagonism between the worker—who needs wages in order to live—and the capitalist—who receives rent, interest and profit—manifests itself in a continuous class struggle. As long as there is class ownership of the means of living this class struggle cannot be eradicated, in spite of the pretence that workers and capitalists have a common interest.

Capitalism has nothing to offer but insecurity, environmental disasters, poverty and war. Global warming and the environmental crisis is one of the greatest challenges facing humanity. The uncontrolled and unconstrained expansion of  capitalism and its waste of resources will result in global catastrophe. Short-term profit-seeking, the abuse of science under capitalism damages the environment. Technology and industry can be beneficial to society, but private property and the priorities of the ruling class creates problems. Our answer is to organise to overthrow those who threaten the planet. Only socialism remedy the climate crises. The answer is not reform, but revolution. Socialism is the solution. Only politically aware and consciously organised working people will be able to  wrest power from the the capitalist class. Socialism  reclaims the people’s property from the capitalists and will end the right for some to exploit other people’s labour. Production will be planned on the basis of what serves society, not what yields the most profit. The producers themselves, the workers, will decide what to produce and how – not “the market”. Today’s environmental problems spring from capitalism’s reckless pursuit of accumulation without regard for human welfare or nature’s limitations. The drive for profit leads to the neglect of everything that stands in the way of it. Ecological havoc is created from one end of the world to the other.

Necessary though the continuation and extension of trades union activity is under capitalism, the true interests of the workers lie instead in the political struggle to establish socialism. On the other hand, the vast majority of trade union members are not socialists. Consequently their political motivation does not go further than reformist activity, which they believe will improve their lot under capitalism. Some, particularly the more active, would claim that they are socialists and that their political activity will help to hasten the establishment of socialism. However the acid test is to examine their definition, or rather lack of definition, of socialism.

Capitalism pollutes almost every institution with which it comes into contact. Whether such institutions are absorbed from a previous social system or whether they grow from the foundations of the capitalist system itself, they are either moulded to suit the interests of the capitalist class or are deflected from their original purpose to meet the needs of capital.

It is necessary to call attention once again to the following facts:

· That the wealth of the world is produced by the labour of the working class of the world, who receive in return wages that are barely enough to provide a poor existence for themselves and their families;

· That the wealth so produced takes the form of commodities, which are sold on the markets of the world on behalf of the capitalist class, the owners of the means of production, for the sole purpose of providing a profit for that class in order to enable its members to live in luxury without the necessity of working;

· That this profit represents the difference between the value of what the worker produces and the value of what he gets, in the form of wages or salaries, to provide him and his family with means of subsistence;

· That the pursuit of this profit, the result of the exploitation of the workers, is the fundamental cause of all modern wars which are quarrels between sections of the master class over the division of the spoil arising out of the robbery of the working class.

Therefore, the workers of the world should unite across the false barriers of territory, race, nationality and creeds into one world-wide combination of their class for the purpose of putting an end to their exploitation by abolishing the present system of capitalist production; in its place they should establish a socialist system, in which the means of production will he owned in common by the whole of mankind and used for the sole purpose of fulfilling equally the needs of each member of society, thus removing the profit motive as a social incentive and replacing it by the socialist principle of “from each according to ability, to each according to needs.”

As the establishment of this socialist system of society is the only means to prevent wars we call upon the workers of all lands to join together to accomplish this end and we point out the need for haste if the world is to be saved from a devastation that might well involve all in a common ruin and put an end to humanity’s progress for hundreds of years to come.

We further affirm our determination, whatever the immediate future may bring, to continue our policy of opposition to war and our advocacy of socialism as the only solution to the problems that beset the working class, no matter on what part of the world’s surface sections of that class may be employed.

This is our message and it is the only message of hope in a world that appears to be on the verge of catastrophe. 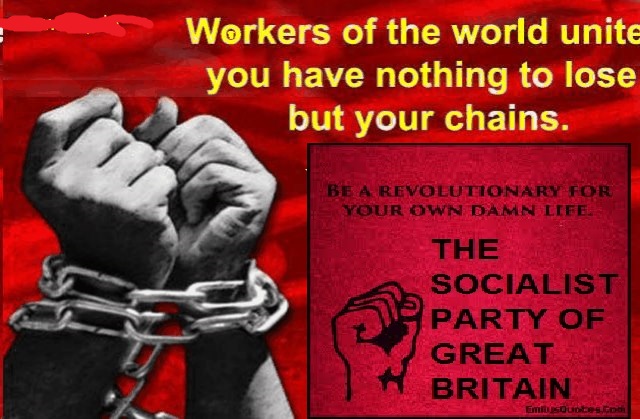