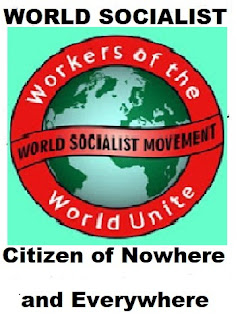 To the World Socialist Movement, Europeans, Americans Africans, Asians or any other "foreigner", are fellow-workers. We greet all with “Vive l’Internationale.”

The World Socialist Movement has its declaration of principles as its platform which clearly sets out the aims and objects of the movement and the means whereby these are to be accomplished. The Socialist Party admits to its membership on terms of equality men and women of all races and nationalities. There can be no misunderstanding for what it stands for. It is the only real democratic party in which the organisation’s office-holders take their orders from the membership and not the other way around. The Socialist Party is composed of men and women who speak and act for themselves and not a flock of sheep to be herded and fleeced by party-leaders.

Socialists are not opposed to “private property” other than in the means of life. We hold no agenda to take away your personal belongings. Socialism, which means industrial democracy, proposes that the producers of wealth shall collectively share in the social wealth, instead of idle parasites who presently benefit from owing the stocks and shares in factories and mines. Socialists are socialists because they observe the poverty and misery of the aged and infirm, despairing fathers and the weeping mothers of hungry babies and conclude that these frightful crimes and cruelties should cease forever.

We in the WSM stand for social revolution; for the overthrow of capitalist despotism and the rearing in its place of an industrial democracy, in which the people shall own and control the means of life, and in which there shall be work for all, abundance for all.

It is to this the World Socialist Movement is irrevocably committed, nor will it cease its agitation until we triumph. Socialists are not hero worshippers because the very essence of socialism is the idea that the emancipation of the working class can only be the job of the working people themselves. As long as workers sit back, passively trusting in some leader or saviour or a party to fix things  for them, they will never progress an inch nearer to the goal of freedom.

The modern wage-slave is nominally free and possesses certain illusory political rights which the chattel slave or feudal serf did not enjoy. But this freedom and these rights have not yet sufficed to emancipate the wage-slave class from economic servitude. The worker is no longer at the command of a single master; but instead completely dominated by the employing class. Wage-slaves have no claims whatever upon their masters. If times are bad and there is no profit to be made there is no need for their  labour-power, so they are laid off and put out to the street.

The fact that some workers receive good wages, in comparison with others who are paid less, makes no difference to the system. In Greece and Rome highly-educated slaves received considerable rewards from their owners, and some even became rich, but this did not affect the lot of the mass of over-worked and ill-fed slaves of the same owners toiling in their mines or on their fields.

Whether they like it or not, the capitalists are what they are and capitalists are what they are because, so long as their business is to make profits, they cannot avoid doing what they do. The capitalists must buy the workers’ sole commodity labour-power. Out of that, the capitalists make their profit, because the wages paid are of much less value than the total value of the product. The workers must sell his or her labour power for the wages of the day, calculated on the average by the cost of subsistence, or else they must go on state benefits, modern-day alms. This is the never-ending class war  between the owners of the property to produce wealth  and the owners of the labour-power, their brains and brawn. Even with government ownership and control, the wages system is maintained  and will remain so until the wage-workers themselves are prepared to undertake administration and distribution, on communal lines, for the benefit of the entire population.

All this was clearly  pointed out to the working class long before Karl Marx by the Chartists in the first half of the nineteenth century. The Chartists taught that so long as the payment of wages by one class to another class continued, and production for profit under a competitive system consequently remained the dominant form of employment, it was quite impossible for the propertyless majority to emancipate themselves from the control of the rich. Ernest Jones, for example, dismissed the demand for "a fair day's wage for a fair day's work", which was to ask for:

"...a golden slavery instead of an iron one. But that golden chain would soon be turned to iron again, for if you still allow the system of wages slavery to exist, labour must be still subject to capital, and if so, capital being its master, will possess the power and never lack the will to reduce the slave from his fat diet down to fast-day fare!"

The better paid wage-earners in some privileged  trades might  gain strength, reach certain agreements with the employers for improved benefits and advantages. But the less secure labourers were in no case able to make even this little headway against the economic forces above them. We see this repeated in modern times with the precariat, uber-workers in the gig-economy.

The only possible remedy for this state of affairs is to establish the co-operative commonwealth where the entire community collectively own and control all the means of making and distributing wealth. Socialists are all at one upon co-operation instead of competition, production for use instead of production for profit. Humanity will never be secure until the wage-system has been abolished and the money fetish has been swept away. Socialism is attainable. 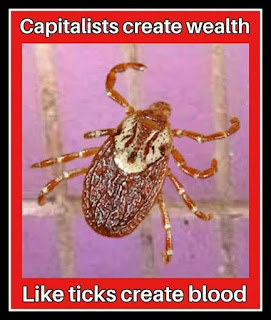