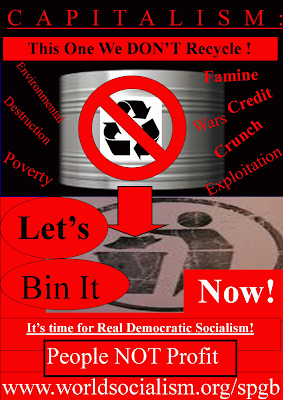 These two types of people, masters and workers. They form two distinct classes, one of whom depends for a living upon working, and the other upon owning what is produced. The workers, then, are wage-slaves. The masters are capitalists because they own capital—wealth (tools and so forth) which they advance with the object of getting back more wealth than was originally advanced or laid out. History will tell you that the wealth the capitalist advances was originally obtained by robbing the mass of the people of their land and liberty. The land was stolen from the people and passed into the hands of a few individuals; how the people were ruthlessly driven off the land and herded into factories; how finally, after many trials and troubles, the one-time member of a peasant commune, owning his land and tools in common, became the wage-slave of to-day, owning nothing but his power to labour, and compelled for his living to sell this power to the present master class, the descendants of those who robbed his forefathers. The extra wealth they obtain over and above that laid out is due to the fact that you produce a quantity of wealth to-day that suffices to pay your wages, make, good what is necessary for further production, and still leave a substantial amount over on which the master and his family and those that minister to the enjoyment of him and his family, live upon. You thus produce surplus wealth—wealth that keeps an idle class in luxury. You keep parasites.

You are living in a society to-day in which the things produced, and the tools by means of which they are produced (in other words, the wealth of society), are privately owned: that is, owned by one individual or by a small group of individuals—either a single capitalist or a small group of shareholders. The aim of the Socialist Party is to make these things social property: to convert these privately owned goods and tools into goods and tools commonly owned by the whole of society. When we say it is socially owned, then we mean it belongs equally to the whole of those forming the society.

Owing to the private ownership of wealth the majority of the people of this country are unable to obtain the things they need except by working for those that own them; and these wealth owners can employ whom they please and discharge whom they please, so that the mass of the people depend for their existence upon the desires or fancies of a comparatively few masters. The majority of people are therefore slaves of the wealth owners, because unless they act as the latter wish they are liable to be sacked and lose the wages upon which they depend for getting the necessaries of life.

The masters, in their fight to keep their privileged position, employ any weapon that they think will assist them. The all-powerful weapon is the machinery of Parliament, which gives them control. This power you give to your master at election time when you vote them into Parliament.

The workers’ organisation, political and economic, must be upon the basis of their class with the object of ending the capitalist system and establishing the socialist commonwealth. Any efforts on their part to resist the encroachments of the master class deserve our sympathy and support. But whilst encouraging this resistance, we should fail in our duty did we not point out to the resisters the limits of their power. The basis of the action of the trade unions must be a clear recognition of the position of the workers under capitalism, and the class struggle necessarily arising therefrom; in other words they must adopt the socialist position, if they are going to justify their existence at all. Does this mean that the existing unions are to be smashed? That will depend upon the unions themselves. All action of the unions in support of capitalism, or tending to side-track the workers from the only path that can lead to their emancipation should be strongly opposed, but on the other hand, trade unions being a necessity under capitalism, any action on their part upon sound lines should be heartily supported.

Whenever the workers have taken action on the economic field, either by way of attempting to increase wages, or resist their reduction, we have not hesitated to support their action. True, we have denounced certain trade union leaders when they, contrary to the wishes and interests of the workers, have entered into compromises with the master class. True, we have exposed the absurd ideas of many of these union leaders concerning the so-called identity of interests between capital and labour. It is also true that we have criticised the great bulk of the trade unionists, who, whilst they are prepared to strike against their masters, at every election vote their masters or their representatives into political power. But all this in no way alters the fact that whenever the workers have attempted to resist the encroachments of capital, the position of the Socialist Party has been one of supporting them.

Right up to the time when the workers are ready to take over the control of the means of wealth production and distribution, the struggle of the workers over wages, hours, and the general conditions of employment, will have to be made, even as the workers become socialists in larger and larger numbers. The duty of the socialist is to make the non-socialist worker, inside and outside the trade union, acquainted with the actual position of the working class in capitalist society. For the workers to continue their struggle on the economic field, whilst in ignorance of the fact that they are slaves to the capitalist class, is to prolong the system by which they are sufferers. The adverse conditions in which the workers find themselves are inseparable from the capitalist system, and can only be removed when the workers awaken to a recognition of the necessity for the removal of the system, and the establishment of the socialist form of society. Whether wages be called high or low the general position of the workers is one of a struggle against starvation throughout the whole of their lifetime. Trade unionism will not alter this, nor, in fact, will any form of economic organisation. The abolition of the wages system and the conditions that are engendered in that system, will only become an accomplished fact when a majority of the workers become acquainted with a knowledge of their slave position, and then organising politically and economically for the overthrow of capitalist society and the establishment of socialism.