The Class Struggle. Part One 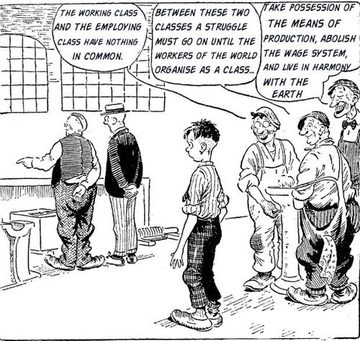 1. The population to-day is made up of all kinds of people, showing much variation in their persons and habits. They differ in size and age, health and mind, dress and looks, and in every family circle, we see wide differences in form, mind and conduct. With all this variation, there is a broad line of distinction, which divides the members of modern society into classes.

2. What is a class? Is it a group of people possessing some taste, habit, or ability, in common? No. A class in society is a body of people distinguished by their economic position. What divides one part of the population from the other, and separates them into classes, is the possession or non-possession of wealth and the necessity or otherwise of having to work for employers. There have been classes ever since private property existed, but the classes we are concerned with are those existing in the present social system. Class lines may not be as absolute and sharp as a mathematical figure, but the above property distinctions generally mark off one class from another.

3. There are two classes to-day. One, the working class, who do not possess property, and are therefore compelled to sell their mental and physical ability, that is, their working power, to owners of wealth in order to live. Whether they are employed in an office or a mine; whether they are paid wages or salaries, as long as they are driven through lack of property to seek a master, they are members of the working class.

The other class in modern society is the Capitalist or Master class. They own the means and instruments required for producing wealth but take no part in production themselves. They buy the workers’ mental and physical energy which is used to produce the wealth. The Capitalists pay the workers in the form of wages, just enough to live upon whilst working, and they retain the surplus themselves.

One class owns the means of production and the products but does not produce. The other class produces but does not own the wealth.

The working class possess only their labour-power—their energy. Like bread, coal, etc., it is an article of merchandise— a commodity. They must sell this to Capitalists in order to get the food, clothing and shelter they need.

4. The buyers of all kinds of commodities have an interest in buying as cheaply as possible. The seller’s interest is to sell as highly as possible. Obviously, therefore, the interests of buyers and sellers are opposite and conflict with each other.

The workers’ commodity, labour-power, is distinguished, however, from all other commodities by the fact that the buyers of that commodity are all of one class and the sellers all belong to another class. The masters are always buyers of labour, and the workers always sellers.

These relations of employers and employed, masters and servants, are due to the divisions of property in society. Out of the material conditions of production and distribution arises the separation of the population into two distinct groups: property owners and wage workers. The ownership of the means of production by the Capitalists and the resulting enslavement of the working class is the basis of the class struggle.

The Hostility Between The Classes.

5. The welfare of each class depends upon its position in society. In other words, the position occupied by the classes gives them distinct interests, according to their place in the social system.

The Capitalist class, being a property-owning class, have a direct interest in protecting their present property and seeking to increase it. Their interest is to pay as little in wages and keep as much in profits as possible.

The working class is a class that lives by working for the owners of capital and their immediate interest is to get as much as possible in the form of wages for the fewest. hours. Moreover, they are the only class that produces the wealth and consequents their interests are to obtain the product of their industry.

7. Conflicting interests cause these classes to take actions in defence of their interests, and those actions constitute an unceasing struggle—the class struggle. This struggle arises from the existence of classes and will continue until the class distinctions are abolished and consequently the classes with them.

A Capitalist may be a genial, so-called kind-hearted man with good intentions, but as a property owner and employer of labour, he is compelled to take a position and engage in actions hostile to the workers.

The class struggle is a fact. The Capitalists know it and pursue their policy accordingly, so that they may be victors. Most of the workers do not realise that the class struggle exists. Their day-to-day actions as wage slaves, however, in bargaining about terms with employers, and the disputes arising out of it, demonstrate that, whether the workers are conscious of their interests or not, the class struggle goes on.

Battle Ground of the Conflict.

8. The class struggle originates out of economic conditions. It manifests itself on the industrial field in the never-ceasing conflict about the every-day conditions of employment, and on the political field, it shows itself as a struggle by Capitalists to retain their ruling power against any attempts to unseat them.

The actions taken by the employers to obtain wage-workers, the methods used to exploit them, and the policy pursued in strikes and lock-outs to defeat them, are part of the class struggle. The workers’ resistance to the actions of the employers and their efforts to get the best possible price and terms for their labour-power through strikes, etc., are incidents in the same class struggle.

10. The master class carry on the struggle against the workers by enacting and administering laws, by controlling the press, the church and the school, and using them to try to prevent the workers taking steps to wrest political control from the Capitalists.

Consciousness of the Struggle Essential to Victory.

11. The workers are in the class struggle but are not conscious of their interests. Hence they fight, blindly and vainly to improve their condition. Inside the unions, in political parties and in their every-day actions they do things that work to the Capitalists’ advantage. They continue to act on lines that perpetuate the system that enslaves them, and support men, measures and parties that work against the workers’ interests.

The workers must recognise that the class struggle exists. They must become aware of their slave position, and the way out, if they are to prosecute the struggle to a victorious conclusion for themselves. If the working class become conscious of their class interests and welfare, they will refuse to take actions that injure them. The guiding policy for class-conscious workers must be: Will a contemplated action assist the workers to triumph in the class struggle?

Every political party expresses the interests of one class or other, and the party expressing working-class interests must, therefore, be opposed to all other parties.

Results of the Struggle.

13. The object of the conscious struggle by the workers must be to raise themselves to the position of ruling class.

The class struggles throughout history, of chattel slave holder and chattel slave, feudal lord and merchant, etc., have been forces in the progress of society. The struggle between the wage working and the Capitalist class is also a force making for social development, and the victory of the working class will mean the end of class rule. The working class is the last subject class to be emancipated, and their supremacy will result in the abolition of class distinctions through the common ownership of the means of life.

The interests of the workers are identical in spite of the apparent hostility between individual workers in their struggle for jobs. They are all victims of Capitalist domination and dependent upon the employing class for permission to live. “Solidarity” must be the motto of the working class, as an injury to one is an injury to all.