The Socialist Liberation of Labour 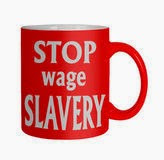 Present-day society does not concern itself with determining the needs of society. The society we live in is called capitalism. It received that name because “capital,” strictly speaking, money invested to gain more money, is the driving force in the production of society’s needs. This money is spent on means and instruments of production, fields, factories, raw materials, machinery and the buying of labour power, and under present conditions most of the money is invested in huge companies and state concerns which produce the bulk of the goods and services society requires. The title to ownership in those organisations is stocks and bonds, and the main market where they are bought and sold is the Stock Exchange. In the commodity market when prices rise this shows which goods are in demand and the production of these goods increases until supply overcomes demand and prices fall. So in general the price of shares on the Stock Exchange rise and fall under the influence of the same kind of factors. The Stock Exchange is a necessary adjunct of capitalist society.

The working class have only three methods of existing, either begging, stealing or working. Obviously the first two methods cannot become general, and to a small section, begging, unless upon a large scale is a rather non-rewarding occupation; while to steal, after everything worth stealing has been stolen, with politically controlled force to maintain its ownership, is also a foolish proceeding. Conditions make criminals and while some respond to degrading influences more readily than others, habitual criminals are in the main those who through prison treatment and associations have been prevented from regaining their lost positions, poor though these may have been. Those who would reform the criminal by kindness and those who would flog him into virtue alike fail to understand the problem. There is, therefore, only that enervating pastime left to the workers, to work—for somebody else.

There is but one remedy for the poverty, unemployment and overwork suffered by the working class. It is the socialisation of the means of production and distribution, which are now owned by the capitalist class (a small minority in society) and used exclusively for their benefit. When the workers of the world own the product of their labours, there will be no need for one to steal the work of another. Each will take his or her part in the production of needful things, and each will share in the enjoyment of such things. The initial step towards the realisation of this object, fellow workers, is, once understanding your slave position in society and desiring your emancipation, to organise yourself along with us in the Socialist Party and help to bring to a close this system of slavery.

Humanity is by natural selection and evolution gregarious; it is natural for us to gather together and associate in communities. We have developed cooperation in production to its present far advanced stage, and in periods of comparative stability, built truly wonderful cultural edifices on this foundation. In those societies where social co-operation in production obtained, and the means of living, simple though they were, were held in common, this social solidarity and the human need for food and shelter were in conformity; but this condition long since ceased to be. The means of wealth production have become privately owned; and slave and slave owner, feudal proprietor and serf, and finally wage-worker and capitalist have faced each other in conflict. The savage and his tribe, self-interest and the loyalty of kinship, were one; individual interests and thoughts of isolated existence were alike impossible. The various classes which have been dominant have had interests in opposition to those of their subject class, and their interests, their ideas, their codes of morality and ethics have prevailed throughout the particular society. The sense of social solidarity still shared by the oppressed has formed a useful buttress for their own oppression and at the same time has hidden the force on which ultimately it rested.

Not the community, but the capitalist class now owns the machinery of wealth production. This class lives on the proceeds of the robbery of the workers who, by their property-less condition, are compelled to operate that machinery for its owners, in return for doing which they receive as wages only part of the product. The capitalists, as a prime need, require to be maintained in possession, and that need is met by the State which controls the forces of society. Now crime consists roughly of two kinds of acts. Firstly those which are anti-social in the sense that they would conflict with the smooth working of any society, such, for instance, as murder and other attacks on persons; and secondly the more numerous and at present more important crimes which are actions detrimental to the interests and stability of the dominant class.

Planning is only possible when goods are produced for use and not for profit, and at the present stage of social development with the gigantic social productive forces production for use implies common ownership of those productive forces—in a word, socialism.

Socialism aims to embrace automation to the utmost so to enhance peoples’ welfare and reduce the drudger of toil. We have reached the  opportunity to realise a post-work society, where machines produces not for profit but for the people. As Karl Marx’s son-in-law, Paul Lafargue, said we now have achieved the right to be lazy. The application of new technologies to human society shows what immense possibilities for the satisfaction of human wants are contained in the achievements of science and in its future growth. It can reduce human labour to the easy task of monitoring computerised automated machinery a few hours a day. It leaves mankind free to engage in other pursuits. Everybody is responsible for the welfare of all, everybody works according to his or her ability and everybody receives from the common stock of goods according to need. No exploitation, no oppression, no insecurity, no poverty. Life is made humane. This isn’t a utopia. This isn’t a dream. What we propose is real,  capable of fulfilment, by the forces that already exist and are in operation.

Capitalism has created all the economic prerequisites for socialism but all around us we see skills and talents squandered by unemployment or pointless work while the liberating potential of automation and computerisation is misused and misapplied, technology and science is devoted to the development and manufacture of armaments. Millions of people face starvation while there is food in abundance. Millions die from diseases that can be easily be prevented or cured. Something is wrong with the world and most people know it. We are told we are free but we don't feel free. People looking forward can only picture a dystopia of despair. Discontent is mounting, unrest is increasing. 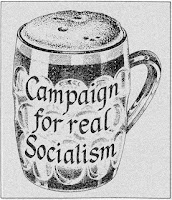