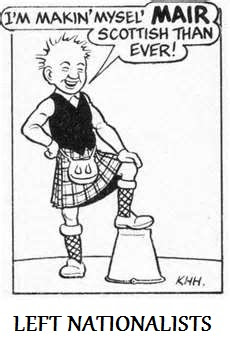 Nationalists are once again on the march in Scotland and their battle cry is “freedom and Independence.”  The SNP is demanding that full political power be turned over to them and they will set about fixing the problems of inequality and poverty. Offering this as the main reason for their nationalism, they attract a lot of support and sympathy. What many people forget is that this newly won political power will be used to administer capitalism—with all the problems which workers are already faced with.

The Socialist Party does not take sides in the contest between local Scottish capitalism, the wider British capitalism nor global capitalism. We are against capitalism in all its various forms. The Socialist Party is opposed to the exploitation of our fellow-workers either by foreign or native-born exploiters. As that exploitation can be ended only by the achievement of socialism, through international working-class action, we are opposed to the Scottish nationalists which has capitalist aims and is not deserving of working-class support. We will not associate with non-socialist political parties.

The fact that we are opposed to the the Scottish nationalist movement does not mean that we acquiesce to the politics of the union. We are opposed to the capitalist system wherever it raises its ugly head, as we know that the solution to the workers’  position under it is the same everywhere. The only road for workers in Scotland is the road to socialism, and they must travel along that road in solidarity and harmony with other members of their class throughout the world. The Socialist Party has never supported nationalist movements, knowing well that the propertied interests which financed and controlled them were only concerned with making sovereignty safe for  capitalism.

Some Scottish capitalists want to have the profits of the prospect of Scottish capitalism for themselves. They wish to be able to control the system of taxation, and the system of tariffs, and use them to further their own interests.  They do not object to the exploitation of Scotland’s workers, but they do object to British investors getting the lion’s share. The Scottish nationalists  represents the interests of local capitalists. It is naturally supported by the well-educated elites, who see the promise of lucrative jobs in the devolved  civil service and the professions. Already when a Scottish ruling class gets hold of the reins of government, we find that there is little to choose between Westminster or Holyrood rule.

We are working for socialism, and for that alone. We claim that only the establishment of socialism can solve Scotland’s many social problems. The only sound policy for the workers, the only policy in line with their class interests, is to keep clear of the nationalists, and carry on steadily with the task of organising themselves on the economic field for the defence of their interests against their employers, and organising on the political field for the achievement of socialism in co-operation with the rest of the world’s workers. There is nothing in the programme of Sturgeon and the SNP deserving of working class support. Our watchword is not “Scotland for the Scots”  but “the World for the Workers."

Socialism as a democratic class-free society based on common (as opposed to State) ownership in which the wage relation has been abolished and all citizens have an equal claim upon the provision of goods and services.   Anything that falls short of abolishing the wage relation has no claim to be described as socialism. When asked why we do not support struggles for Independence by fellow workers in other parts of the world, we point out that, at best, they will simply be exchanging one lot of masters for another. They may win or be allowed a little more freedom within the system but while it remains they must depend on the capitalists — state or private — for their subsistence. For workers, independence is merely a change of rulers. Nevertheless, our rejection of nationalist delusions ought never to show insensitivity to the often valid concerns of oppressed peoples. Moreover, it strengthens the appeal of socialism to show that in contrast to the imposed uniformity and centralisation of commodity production we aim for a way of life which fosters cultural freedom and diversity. 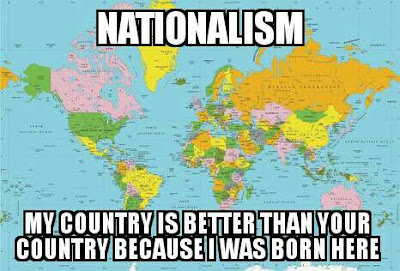