An appeal to fellow workers 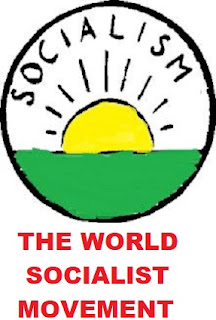 We address you not as citizens of one country to citizens of another but as world socialists to fellow members of the world working class.

The basis of present-day society is the class monopoly of the means of living, that is, the land, factories, railways and so on. Accumulated wealth is monopolised by a privileged minority. The rest, separated from the means and instruments of labour, are forced to work for those who own them. This inequality, poverty and slavery are capitalism.

We reject frontiers as artificial barriers put up by governments. All men and women are brothers and sisters and the world should be theirs. All people should be social equals with free access to the plenty that could be if only the means of living belonged to a socialist world community. We oppose governments everywhere, all nationalism, racism and religion, all censorship, all wars and preparations for war.

We support all class struggles for better wages and conditions against the employers and governments. Do not be misled by those who say that universal suffrage is a fraud. Learn from your masters. You too must organise to win political power if you want a new society. Do not let cunning politicians retain power on your backs. Ignore those who would be your leaders. Rely on your own understanding and organisation. Turn universal suffrage into an instrument of emancipation.

We share your wish for a new society with no exploitation of man by man. But do not underestimate what a task it will be to change society. It will be a hundred times more difficult than changing the government. A democratic world community, based on common ownership with production for use not profit, can only be set up when people want it and are ready to take the steps needed to get it up and keep it going. Democratic political action is the only way to socialism. There are no short cuts. We must have a majority actively on our side. Do not be misled by left-wing demagogues, those who praise Trotsky, Mao or Che Guevara, who would use you for their own mistaken ends. They think that an elite should use unrest to gain power and then set up a class-free society. What dangerous nonsense! Look at the former state capitalist Soviet Union where a new privileged class ruled, with police intimidation and censorship, over an increasingly restless population. Look at state capitalist China where power-hungry bureaucrats cynically manipulate the people in their own sordid squabbles. Learn the lessons of history: elite action leads to elite rule. No socialism unless by democratic political action, based on socialist understanding.

What, then, do socialists suggest? In the past, we were accused of wanting equal sharing and dividing up amongst the poor the wealth of the rich. This, of course, was a lie. What we do advocate is the social ownership and democratic control of the already socially-operated means of living.

The task we all share is the same that we face in Britain and our comrades in Europe, Asia, Africa and the Americas and all other countries: to build up a strong world-wide movement for socialism. What is needed more than anything else in this period of social unrest is a clear, uncompromising statement of the case for a socialist world community.