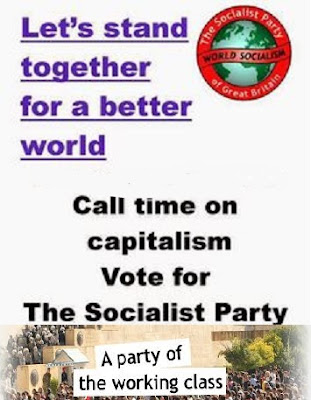 The members of the Socialist Party are the party and their collective will is what guides it. The Socialist Party is organised and run from the bottom up. There is no Party boss or central committee leaders and there never can be unless the Socialist Party abandons its principles and ceases to be socialist. Each member has not only an equal voice but is urged to take a role in all the party’s activities and administration. The Socialist Party relies wholly upon the power of education, knowledge, and mutual understanding. It buys no votes with election promises.

Socialism can only come when enough workers want it. Do not resign yourself to the fate that the world as it is cannot be changed. It can be changed. You can most certainly play a part in changing it. First you must understand what needs changing and how to change it The problems we face all arise from the fact that the means of producing goods and services of all kinds are in the hands of the employers. Because of this profit is society's motive force instead of needs; because of this the struggle for oil and markets, etc., exists, which leads to wars. To send socialists (not reformers) to Parliament backed by understanding for the one object of making these means of living the common property of all  is the only answer. This means no wages, no money, no market, profits or wars, but world-wide cooperation to produce enough and happiness for everyone. The working class now runs industry to its own misery for the profit of its oppressors, but the day is near when it should take those industries that have been built up with its blood and sweat and transform them from means of profit for a handful of parasites into the means of its deliverance from slavery and degradation.

The more the minds of workers are lulled with mystical views the less clear the thinking they can do about their fundamental problems. The worst of the matter is that people derive a temporary relief from putting these problems behind them as insoluble or accepting them as inevitable. In this they are like the early Christians who gave up hope of improvement in their earthly life and despairingly accepted their miseries without resistance, treating them as scourges on the path to paradise. The problems of the workers, endless toil, poverty and insecurity, are neither inevitable nor insoluble. They are the product of the economic conditions of today just as the problems of the chattel slave and the serf were the product of the economic conditions of the times in which they lived. In fact, the fetters that bind the producer are a heritage from the dawn of civilisation, when a portion of mankind grabbed a privileged position and forced others to do the work.

The means shape the ends: means are ends. A policy based on the idea that the position of servitude of the working class can be gradually abolished by reforming the relation of wage-labour and capital cannot produce the abolition of wage labour and capital. A policy which allows for co-operation with avowed anti-socialist parties cannot lead to the establishment of socialism. The nature of a government is not determined by the name which it takes or which it may be given. In so far as we are discussing the question of capitalism and socialism the nature of the government is determined by the mode of production and distribution in being during its time of administration. The only solution to working-class troubles is to be found in the establishment of a socialist system of society.

Marxists do not regard the state as part of some eternal dispensation. It can be shown that the state is a historical product and, like all other social institutions, it has an origin and growth. Marxists point out that there have been societies without states, hence society is both logically and historically prior to the state institution. The state as an organised coercive agency does not in fact emerge until the break up of early tribalism, with its basic egalitarianism, which was brought about by the development of private property relations and its concomitant privileged and unprivileged social classes.

With the division of the community into owners and non-owners of the sources of wealth production, the state as a social power becomes the means of ensuring the continuance of this division against disruption from within, as the result of social conflicts engendered by antagonistic class relations of production and enemies from without. The state thus serves to guarantee the legal titles of those who own the means of production and gives them the right to appropriate the labour of others, be they slaves, serfs or wage workers. In the ultimate instance these legal relations can receive a physical sanction by the control of the state over the armed forces. Thus any class which is the dominant class in a given set of private property relations of production must have direct or indirect access to the state apparatus.

Marxists point out that class social systems, with their corresponding state structure, are the outcome of social development. They have come and gone, and there are good historical reasons for stating that capitalism, which is the latest of such systems, will also be the last and in turn will give way to a class-free and hence state-free social organisation.

Reformists accept the fact of the class structure of capitalist society, but they do so on different grounds to Marxists. For them, social classes and state organisation have always existed and always will. That is why Labour propaganda, although it at times makes veiled references to the injustices of a class society, never advocates the abolition of classes. For them, capitalism is part of an eternal dispensation. Their theory is then unhistorical and uncritical.

If, according to such a view, there must always be a class differentiation in the social structure, what purpose does the state serve? Their answer is that the function of the state is to minimise the conflict between the classes to the greatest possible extent, in order to maximise social harmony. On such an assumption the state is not a class organ but a classless agency which exists to reconcile divergent economic interests for the greatest common good. Translated into actual political practice, it is the class collaboration theory of the old political parties, whereby the state serves as a means of seeking to blunt class antagonisms. Accepting as they did the contest between Capital and Labour as a social norm, they claimed that they would see it was fought under the Marquis of Queensbury rules. Whatever changes the reformists envisage in capitalism, it always unchangingly assumes capital in eternal control. Something for which the capitalist class no doubt feel eternally grateful.