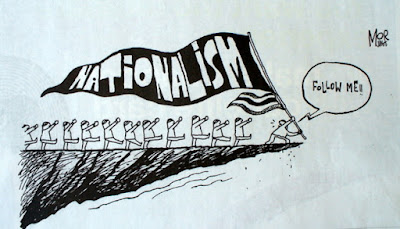 There is a clear class division in present-day society. Millions of people are being born into families of workers. They may end up as teachers, miners, dockers, musicians. Of one thing we can be sure. They will be forced to sell their ability to work for a lifetime, simply in order to live. And then, every so often, are born exceptions to this rule—the children of the few families whose names are written over all the stocks and shares, who own the farms, mines and offices. Families of financiers, international global empires, barons of industry. From birth they will be given the best that the world’s workers can produce. They will be taught not how to go looking for jobs, but how to indulge their leisure hours with pleasure-seeking pursuits.

Workers are endlessly urged to support “the Scottish nation”. But we have no stake in Scotland; it is just the place where we happen to sell ourselves. The working class is a global class which owes no allegiance to any nation states. The capitalists themselves invest in whatever country is most profitable for them. Patriotism  has always proved stumbling block to the workers and to their immature organisations, and nothing has more clearly shown the danger of half-knowledge than the ease with which the ruling class have been able to muddle their minds and inflame their passions by raising such issues as national identity.  We are all human beings, and under capitalism most of us are members of the working class, forced to work for a wage or dependent on someone who does so. Thus we are all subject to the exploitation of capitalism, and to varying degrees to its inequalities and discrimination. People differ of course: gender, sexual orientation, abilities, interests, but allotting people to pigeon-holes disguises what brings us together. Nations are artificial entities, and a shared national identity has to be invented and constantly reinforced by propaganda.

Nationalism is a product of the competition and rivalry inherent to the capitalist system itself. Nationalism is the ideology serving the interests of differing sections of the ruling class, and it now stands as barriers in the way of the progressive movement which seeks to establish a real world human community without class division and national frontiers on the basis of the potential economic abundance made possible by capitalism. That movement of course, is the movement for world socialism.

Many workers of all nationalities who have passed through ethnic terror, now realise that the cult of nationalism is indeed tragic futility so far as the working-class are concerned; and the spirit of international co-operation and solidarity, though slowly, is surely growing up amongst them, born of the knowledge that they are poor because the greater part of the wealth they bring into existence is robbed from them by the capitalist-class.

Socialism will be a global society, with no countries or borders or passports. As for culture, it will be up to people in socialism to organise their lives as they wish. We cannot predict now, but there are likely to still be differences such as language, diet, sport and so on. Aspects of climate will result in differences in how people live, with some finding ways to pass the long winter nights while others will spend far more time outdoors, with some places perhaps having siestas.  ‘Let a hundred flowers bloom’  expresses well the idea that people in a socialist world will be able to live as they wish, as long as it does not infringe on the freedom of others.