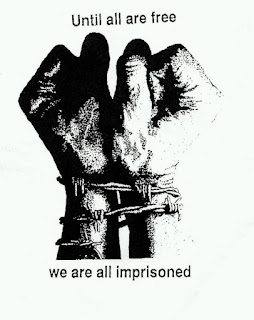 The earliest and most universal form of social organisation known to history is the gens—an organisation based upon kinship and the common ownership of the means of life., such as the Scottish clans. This primitive communism lasted millenia. Many of these old primitive forms of society still exist and in its relations with them the socialist movement adopts the historical viewpoint and with a view to developing the conditions which make socialism possible. The new society will be based not on exchange but on a self-sufficient economy. Between production and consumption of products there will not be the market, buying and selling, but consciously and systematically organised distribution. All economic obstacles to development will be abolished under the new system. Thus, the application of machinery, which under capitalism is determined by considerations of profit, under the new system will depend entirely upon productivity. As we have seen, machinery which may be very useful for saving labour is very frequently useless from the standpoint of capitalist profits. In socialist society such a point of view will not prevail and there will therefore be no obstacles to the application of labour-saving machinery.

Discontent is growing. The workers are chained to exhausting toil for wages which are lessened every day by the rising cost of living. The capitalists are amassing greater profits than ever.

Socialism is the reorganisation of society on the basis of shared ownership by the working people of the land, mines, factories, means of transport, as well as the health, educational and cultural services required to fulfil their needs.

The Socialist Party maintain that there can be no fundamental change in the living conditions of the people while a minority holds economic power over resources and the right to exploit the majority for individual advantage. The use of men and women for personal profits and power lies in the capitalist system. Reforms do not remove the villain of the piece from the scene of action. While he holds economic power the people will bear the weight of his oppression.

The Socialist Party does not want a bloody revolution. Revolution means radical change. There have been revolutions in art, industry and social relations which have not caused bloodshed. It declares that the many have the right to organise and educate the people so that they will be able to bring about the change in the basis of the State and of our social system. By so doing it believe they reduce the dangers of a violent revolution. The workers have never yet developed or made use of their political power. They have played the game of their masters for the benefit of the master class - and now many of them, disgusted with their own blind and stupid performance, are renouncing politics and refusing to see any difference between the capitalist parties financed by the ruling class to perpetuate class rule and the Socialist Party organised and run by the workers themselves as a means of wresting the control of government and of industry from the capitalists and making the working class the ruling class of  the world.

The laws of evolution have decreed the downfall of the capitalist system. The handwriting is upon the wall. In the coming social order, based upon the social ownership of the means of life and the production of wealth for the use of all instead of the private profit of the few, for which the Socialist Party stands, peace will prevail and plenty for all will abound in the land. The brute struggle for existence will have ended, and the millions of exploited poor will be rescued from  poverty and destitution. The socialist cooperative commonwealth will prevail. Humanity will have  a new destiny. There will be abundance for all, leisure for all and free access to the joys of life for all.