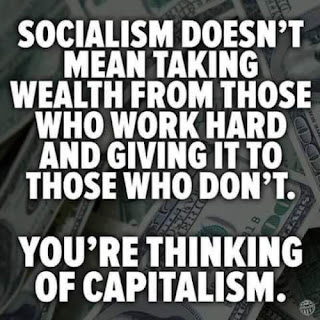 Although we are in favour of keeping the term “socialism” in our party campaigns, we shouldn’t let ourselves get too hung up about words—any word can become abused and misused; indeed you only need to think how the term “democracy” has been rendered almost meaningless through its use by state and corporate mouthpieces.

Descriptions such as socialism, communism, anarcho-communism, social or industrial democracy, resource-based economy and cooperative commonwealth are all valid, if used meaningfully, for the sort of society we seek to see. There is nothing to stop us using a multitude of words and descriptions for what we stand for in our political activities. What’s important is that we get our ideas over as effectively as possible. There is no reason why we should constantly shout “socialism” from the material we produce and distribute, and anyway, much of the time we don’t.

However, for many many people the words “socialism” and “socialist” hold the sort of vision of an alternative, free society that we stand for. This makes it a strength, and something that will attract people who consider themselves politically aware or socialist to the World Socialism Movement. The title “socialist” connects us to the long tradition of revolutionary ideas and movements of which we are a part.

The important thing would seem to be that socialists take an open-minded and non-dogmatic approach to the way we present and develop our ideas. Discussions like this should hopefully stimulate us to think how best to spread the message of self-emancipation and common ownership.

The Socialist Party is the one party (together with our companion parties in the World Socialist Movement) which stands, and has always stood, for socialism: a state-free, money-free, class-free world community, democratically controlled by the whole of society and with free access to the goods and services people need to live as true human beings. The Socialist Party must be proud of its name and now, more than ever before, must stand by it.

Whatever the reason for the association of the left with red, why does the Socialist Party still use this colour? If we are to change people’s stereotypical perception of socialism and socialists—which is difficult enough as it is—then we need to change how people view us rather than reinforcing what they already believe. The red flag was first used as a revolutionary emblem in the French Revolution, in 1792 when the monarchy was overthrown. in one of his articles on the revolutionary events in France in 1848 (Class Struggles in France 1848-1850) Marx referred to the red flag as being the flag of “the most extreme subversive party”. So too, the first English translation of the Communist Manifesto appeared in an extreme Chartist paper, the Red Republican. The Paris Commune of 1871 adopted the red flag as its official flag, so again Marx wrote about “the Red Flag, symbol of the Republic of Labour, flying over the Hotel de Ville” (Civil War in France). The words of the song The Red Flag (which used to be sung at pre-WWI Socialist Party meetings such as those to commemorate the Paris Commune, before the song got hijacked by the Labour Party) were written by James Connell in 1889. One line reads “we must not change its colour now”

To solve the many problems confronting humanity what is needed is a change in the basis of world society from existing class ownership to a world in which the Earth’s resources have become the common heritage of all. Continuous development of the world’s capacity to produce wealth could be said that sufficient plenty for all people on Earth has been produced and society of common ownership and production to meet human needs, not profit can now replace capitalism.