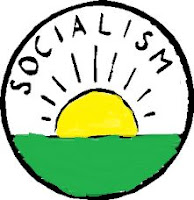 “Dare to be a Daniel,
Dare to stand alone.
Dare to have a purpose firm,
Dare to make it known.”


Bleeding the poor is a normal operation for capitalism. Poverty stalks the land. The standard of living of the people has been reduced drastically. There are people fearful of the world, all along the political spectrum. In the view of the Socialist Party capitalism is beyond salvation by any means. The alternative is to ally oneself with the future; with the socialist movement, to put an end to capitalism and open the way for the socialist society of the free and equal. That is the way to secure peace and progress and a good life for all. Today, when capitalism, “the free market,” and “private enterprise” are being hailed as triumphant in the world, it is a good time to rekindle the idea of socialism. The Socialist Party offers something worth fighting for, a victory for all humanity in which you and your generation will share. The Socialist Party reaffirms its adherence to the principles of socialism. We declare the Socialist Party to be the party of the working class with intentions of socialising the means of production. The present system of industry is directly the cause of the many evils which now prey upon society. It fully realises the crying need for an immediate change in the social system; it realises that the time for compromise has passed; and that now it is only the question whether all power remains in the hands of the capitalist or is taken by the working class. The Socialist Party proposes the organisation of the workers as a class, the overthrow of capitalist rule, and the conquest of political power by the workers. The purpose of the Socialist Party is to create a unified revolutionary working class movement. The working class, in order to gain control of the means of life, have by force of economic necessity been compelled to organise into their industrial and political organisations, and wage battle against the capitalist class directly on the industrial field through their industrial organisations (Direct Action) and indirectly on the political field through their political organisations (Political Action). The struggle by the working class to achieve its revolutionary purposes — the ownership and control of the means of life — cannot be obtained without a struggle against the state, and all struggles for the conquest of the capitalist state are political struggles.

A juicy carrot is dangled just in front of the donkey but out of reach, only in order to keep it going with the heavy load on its back. Reformists are always ready to PROMISE the good things of life some time in the future. The only fight for a better tomorrow that has any serious meaning is the fight for socialism that begins right now. Workers must act as a class, with a class movement and a class programme and a class struggle of its own. The employer uses his economic and political power to get the highest profits in history. The wages of the workers are forcibly kept at the lowest point. If they attempt to improve their economic position by the use of their organised strength, the whole machinery of the government is brought to bear against them.

The capitalist system of production, under which we live, is the production of commodities for profit instead of for use and for the private gain of those who own and control the tools and means of production and distribution. Out of this system of production and sale for profit spring the entire problem of misery, want, and poverty that, as a deadly menace, now confronts civilisation. Socialism will usher in a new civilisation based upon the welfare of all. Socialism is the application of human association. The Socialist Party teaches that the only way to attain the just distribution of wealth to those who produce it is through the common ownership, democratic control, and planned operation of the means of production and distribution, such as land, mines, factories, transport and communications, etc., etc. It asserts that this production should be for use and not for sale or profit, thus doing away with all private ownership of the means of subsistence with its accompanying unproductive labour and an immense number of useless and harmful occupations. Socialism would not abolish the private possession as distinct from social capital. Thus homes and all personal belongings would still be individually and not collectively owned. The cooperative commonwealth is the Socialist Party goal.

This involves a complete change in the structure of government. The present government is based upon private property and is essentially coercive, the vital function being to protect the interests of the owning and ruling class, and to keep their victims in subjugation. When productive capital becomes common property, government will be purely administrative, and will cease to be unjust and oppressive. The owning class in the present, as in all past ages, is necessarily the ruling class, and all legislation is enacted and interpreted in the interest of said class. Political equality under the present system is simply a myth. The wage-workers whose employment is controlled by their master, and who in that relation is at the mercy of their master since they depend upon his arbitrary will for the opportunity to labour and support their families, is not on terms of political equality with the master. Political equality is rooted in economic freedom, and only when the means of production shall have become the common property of all, as they have been produced by all, are used by all, and are necessary to all, only then will political equality prevail and all men and women enjoy equal rights and equal opportunities. The Socialist Party proposes to establish industrial democracy, based upon cooperative industry, thus converting the present bogus into a genuine social democracy.

Resources in its various forms are to be owned in common, and we 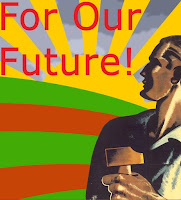 will not have countless capitalists at war with each other in an insane strife for profit. Rent, interest, and profit, three forms of exploitation, will be totally eliminated. Production will be carried forward for use and not for profit. The working day will be reduced in proportion to the progress of invention. This is the goal of the Socialist Party and of the international socialist movement of the world.