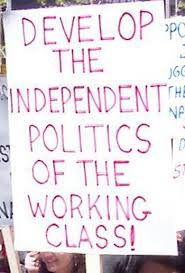 Socialism is a class-free society where the people as a whole own the means of production (factories, mines, etc.). Production is for people’s use, not for private profit. The principle of the operation of socialism is “from each according to his ability, to each according to his needs”. Production is of such a high level that there are abundant commodities for every member of the community and each member helps himself or herself according to needs. When we speak of the Socialist Party as “revolutionary” we mean, on the one hand, that its aim is revolutionary and on the other hand that we believe in the revolutionary method. We do not believe that the people can be delivered from poverty, unemployment, degradation, war, by any reform of the capitalist system under which we live. That system must be abolished, wage slavery must be done away with altogether. The workers must own and control the machinery of production. There is always someone who promises the workers to fix things up. Isn’t it about time that the workers realised that it does not make any difference how well-meaning these reformist saviours may be, there is no way out under capitalism?

Capitalists make their profits by paying the worker in wages a smaller value than he or she creates by labouring. The capitalist thus gets what Marx calls surplus value. It is the only way profit can be created. Under modern conditions expensive plants and equipment are increased, but the work is done with fewer workers. Thus they must be exploited ever more fiercely in order that surplus value – profit – may be squeezed out of their labour, the only possible source of profit. The only function of the modern capitalist is to own. Capitalism is founded upon production for profit. Socialism is based upon production for use. The worker is interested in production primarily in so far as it is production for use, that is, in so far as it makes it possible for him to have the things needed to preserve and expand life – food, clothing, shelter, comforts. The capitalist is interested only in production for profit. He will produce bombs as readily as he produces shoes, and more readily if it yields a greater profit. However, if he cannot realize a profit for himself on the market, he will produce neither bombs nor shoes. The fact that people always need shoes and food and shelter is of absolutely no concern to him, unless he can realize a profit for himself in producing these articles. If he cannot, he suspends production. He closes down his plant, sending workers out of work.

The capitalists give every explanation possible for their profits, except the real one. They talk about the “risks of capital,” about the “legitimate yield of enterprise,” about their own “hard work,” and a thousand other things. But if they were a million times more enterprising than they are, and took a million more risks than they do, and if they cheated each other and everyone else a million times as much as they do – there would still be no other way of making profit under capitalism than by exploiting labor, by forcing employees to create a surplus-value above that which is represented by wages. And the means they employ to reduce workers to the position of a wage-slave rests in the private ownership of the means of production and exchange. That is why capitalists always seek to reduce wages. The lower the wages paid, the higher the profits made. That is why they seek to lengthen the working day. The longer the working day, the more hours the worker devotes to producing surplus-value. That is why they always seek to speed up the worker, to intensify his production, to have one worker operate more and more machines and do the work of more and more workers. The more intensely the worker labors, the more value he creates; therefore, the more surplus-value; therefore, the more profit. This greed for profits knows no limit. If capital makes five per cent profit, it is not content until it makes ten; when it makes ten, it seeks every possible way of making twenty. Profits can be obtained and increased only by a constant intensification of the exploitation of labor, by reducing labor’s share of the national income, by lowering people’s standard of living.

The Socialist Party make no pretense of attempting to serve both capitalists and workers and appeals to our fellow workers around the world upon the lines of their class interests. The worker has naught but his or her labour power, of hand or brain, to sell, and he or she must sell it upon terms dictated by another, and so we are, indeed, slaves. Who controls my bread controls my head, and so the contest between modern capitalism and socialism resolves itself into the age-old question of human slavery. The issues which divide the capitalists are merely quarrels between rival groups of capitalists over the division of the spoils which they have expropriated from the workers. We are no more interested in the outcome of these political squabbles than we would be in the falling-out of two hold-up men who had robbed us as they split the proceeds of the crime.
By ajohnstone at October 20, 2015