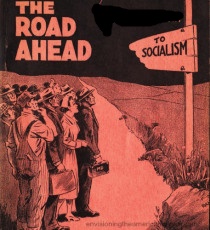 All great strikes prove that the government is under the control of the bosses and that the politicians are as subservient to their capitalist masters as is the army of wage-workers that depends upon them for employment.

Employers and employees are locked in a life-and-death class struggle; there can be no identity of interests between masters and slaves-between exploiters and exploited and there can be no peace until the working class is triumphant in this struggle and the wage system is forever wiped from the Earth. The Socialist Party stands uncompromisingly for the working class and its emancipation. There is but one issue: Labour versus Capital. For the present the ignorance of our fellow workers stands in the way of achieving victory but this can and will be overcome. Capitalism has become an obsolete oppressive system that we ought to get rid off but many continue trying to satisfy their needs within the system rather than by overthrowing it. So for the time being, there is no real possibility of overthrowing that system and attempts to do so degenerate into futile reformism and/or terrorism, whatever the “revolutionary” rhetoric.

It has been said often enough that there can be no blueprints for the future because the people themselves will decide how to build the new society as they are building it so we should refrain from attempting to present any blueprints. Nevertheless, it is appropriate to put forward a few ideas for discussion about what socialism is. We need to go beyond denouncing what the existing regime is doing and start offering constructive alternatives, even though any such proposals are bound not to be fully-developed at this stage. We need to develop a clear statement of the type of world we aim to make, so people can decide whether or not they want to fight for a revolution. Too many left parties talk about “revolution” in the abstract. Socialist ideas are widely discredited by the sterility of their apparent supporters of supposed “socialist” parties. It is more than odd that the usual left discussions is of how to make capitalism work better. “Revolution” does not mean that we would “control” the corporations and “demand” that the multinationals do this or that. It means that we, the working class take over the running of industry and make the decisions ourselves. If a revolutionary party does not propose a better world built upon social justice then why should anyone support a revolution?

The social revolution required to transform capitalist enterprises into cooperative associations of producers obviously involves far more than just government decrees transferring ownership. The revolution itself would have produced workers’ councils in many enterprises which would have taken over responsibility for management. Some anarcho-syndicalists imagine that if everybody democratically discusses everything, production units will be able to exchange their products to supply each other’s needs, and to supply consumer goods for the workers, with no more than ’co-ordination” by higher level councils of delegates from the lower level establishments. Actually things are not so simple, and any attempt to realise that vision would only mean preserving market relations between independent enterprises, still not working to a common social plan. The concept involves a sort of “parliamentary cretinism” of the workplace. No amount of elections from below will change the fact that these people will be doing the job currently done by capitalists “bosses” and be responsible for the policy decisions in industry which provide ample scope to develop into new capitalist bosses themselves (and bosses with wider and more totalitarian powers). Electing new bosses does not abolish the boss system. Elected workers’ councils would be in exactly the same position of having to lay off staff, if there is no market for the goods they produce. For sure, a lot of production management has become a fairly routine function which could be readily taken over and transformed by workers’ councils. Workers should have no difficulty rapidly improving productivity over what can be achieved under a basically antagonistic system of bossing. Workers councils will unleash workers’ intelligence and initiatives in production, so that organizing the work process would cease to be restricted to an elite that excludes the contributions of the vast majority. Research and Development would become much more widespread, be much closer to production, and require much less “management”.

The question of centralisation and decentralisation of enterprise management, is quite separate from the question of abolishing commodity production. The capitalist ruling class allocates investments. It does this rather blindly, and with colossal waste, but it does do it and whatever is wasted, is often a loss to the particular capitalists concerned, as well as to society as a whole (The capitalist parasites are not even very good at keeping track of their own wealth, as is shown by the various multi-million dollar frauds that have been coming to light). If the new socialist society has no criteria for planning production there would be general chaos as each workers’ council decides what it thinks should be produced and only finds out later that it lacks the necessary inputs or there is no market for the outputs. As long as capitalism production and wage labour exists, even the complete suppression of the old bosses and its replacement by worker-owned and managed cooperatives cannot prevent capitalism continuing.
By ajohnstone at October 21, 2015