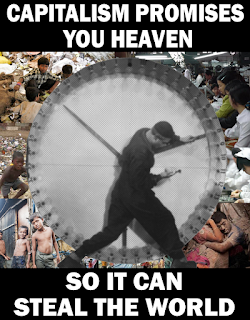 Report from Oxfam Scotland finds wealth off the top four dwarfs the poorest one million people in the country. The four richest families in Scotland are worth £1 billion more than the poorest 20 per cent of the country’s population, according to new research.

The combined wealth of the Grant-Gordon whisky family, Highland Spring water owner Mahdi al-Tajir, oil tycoon Sir Ian Wood and former Harrods owner Mohammed Fayed dwarfs that of the one million people who make up Scotland’s poorest 20 per cent, according to Oxfam Scotland.

The four families – all of whom are either based in Scotland or have substantial business interests there – are worth an estimated £6.1bn, according to the most recent Sunday Times Rich List. Scottish Government figures show the combined wealth of the poorest 20 per cent of Scots stands at around £5.1bn. Researchers at the charity also calculated that Scotland’s 14 wealthiest families are better off than the most deprived 30 per cent of the population.
By ajohnstone at October 08, 2015

Is it wrong to build up a globally successful business?
https://en.wikipedia.org/wiki/Ian_Wood_(businessman)

No doubt he is a very hard working man and made numerous personal sacrifices to achieve his wealth. Of course, it is all made on the sweat and toil of all the various oil workers from the humblest of roustabouts who too invests his labour and often his life into the oil industry.

Yet one who pushes the pen and manipulates the market reaps the giant share of the rewards. Work and producing wealth is a collective affair involving the socialised effort on a global scale but the owners, not the producers, get the profits and gains.

His was, of course, no rags to riches story...he had a reasonable secure base to expand from a fishing business to North Sea rig support. He made his money from the acquisition of other companies, in other words, buying the skills and talents and knowledge of workers.

But i am curious why you chose Wood and not the other three families to defend the capitalist class.

It proves the old adage, generally if you are born poor you die poor actually and relatively and the converse.