The Party of dispossessed and exploited 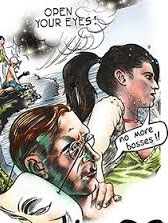 No blueprint of socialism can be given. Many accuse the Socialist Party of not providing a prescriptive path forward or setting out how socialism should be run. We can only generalise on what kind of society will replace the irrational one we live in. The Socialist Party does possess a vision of a better society and holds a general agreement on how to achieve it. What is needed for peace and prosperity is not another wish-list of UN promises from the same old bandits – but a worldwide union of workers. What is needed is the death of capitalism and the birth of socialism. Power and profit – the motive force of capitalism – must perish. The peoples of the world will be able to exchange their goods and their resources according to their human needs.

Most people in the world still struggle daily for food, clothing, and shelter. While a relative handful of people grow ever richer, the vast majority of people face a rapidly declining standard of living. Homelessness, unemployment, crime, inadequate education and health care, and mass alienation have become facts of life. For the first time in US history, present and future generations are confronted with the reality that they will be worse off than their parents. Millions of children are living in poverty, millions are homeless and millions of Americans have no health coverage. College education is now beyond the reach of many Americans. Impoverishment does not begin below the subsistence line of mere physical existence as defined by some authority. It can begin anywhere. A worker deprived of his or her car by unemployment or a falling real wage is just as much impoverished. And where his forefathers fought for bread he or she fights to meet the payments on the home or the central heating. Increasingly, people are looking for alternatives to the way of life currently available to them. We believe that society must be organised to put human needs not for profit. We believe future history will be made by people struggling to put society’s resources at the disposal of the majority of the people.

We reject Lenin’s view of the vanguard party. We do not believe that a single party can or should determine the direction, strategy and tactics of the struggle for fundamental change. We reject the idea that fundamental change can or should come about through a seizure of power by a vanguard party claiming to act in the interests of the working class and the majority of society. We reject the goal of the “dictatorship of the proletariat” as it is currently understood. We reject the view that a single party can use its claim to represent the working class as a substitute for multi-party democracy and free elections. We are opposed to dictatorship in any and all forms, and we recognise that the application of this principle has in every case meant that a minority acts for and defines the interests of the majority of society. Such a view is antithetical to genuine democracy, and we believe that the socialist movement must practice and embody the values and principles that they strive to achieve in society.

Today workers live and work in a world dominated by far-flung corporate empires, of a scope and size unimaginable to previous generations, which treat the entire planet as their domain. They are a law unto themselves, free to roam the globe in search of cheaper labour, more exploitable resources, more pliant governments and greater profits. They now hold the power of life and death over every region and industry on our planet. By their dictates, our resources have been plundered. Workers are their pawns in a global game of mergers, shutdowns, and relocations. These multinational conglomerates have robbed us of our wealth and of the very power to determine our own future. The legacy of these profiteering monopolies is that they are incapable of turning their technology and organisation to the needs of people and have distorted the economic development of the world so fundamentally that the resources they waste on war production, for instance, could eliminate hunger in the world.

The new technology information revolution will only intensify massive permanent unemployment with further automation and robotics, leaving tedious and stressful jobs for the remaining workers, and terrifying concentrations of knowledge and control in the hands of private corporations. The central question posed by technology is political. What kind of society do we want to create with the most powerful extensions of human labour and intelligence since the industrial revolution? If harnessed to popular administration and planning, new technological innovation could help us achieve an era of abundance for all, release us from monotonous toil and enrich our store of accessible information. The socialist option is the only alternative. The needs of people, not profit, are the driving force of a socialist society. It will be accomplished by democratizing all levels of society, and by making workers’ participation the centre of industrial organisation. Under capitalism, labour is a commodity. Workers are used as replaceable parts, extensions of machines—as long as they provide dividends. Employers use their power of ownership to devastate the lives of workers through layoffs, shutdowns and neglect of health and safety. Unions, despite their courageous efforts, have encountered difficulties eliminating even the worst abuses of management power. Socialism will dissolve the economic foundation of one-sided management privilege by relying on the needs and creativity of people, enhancing the power that people can exercise over their own lives.

The Socialist Party is the party of the dispossessed and exploited struggling to build a new world. As socialists we support all struggles against the injustices of capitalism. The Socialist Party does not offer just a blueprint to a better future. We offer an invitation to all fellow workers to join us in our common efforts to eradicate a social system based on exploitation, discrimination, poverty and war. The capitalist system must be replaced by socialist democracy. That is the burning issue of our era, the only hope of humanity.
By ajohnstone at October 02, 2015