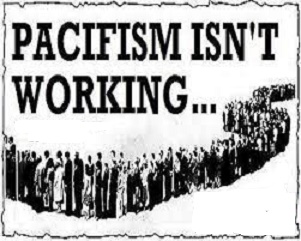 Most people are opposed to war. War is so terrible in its methods and results that only a small number of deviants or professional soldiers or completely ruthless financiers can support it. Even the practical politician, at least, must pretend to themselves that they are against war. But we have seen that wars do not result from what people wish and believe; and that being against war does not prevent people from acting in a way that helps bring war about.

The aim of the pacifist is to bring about a state of affairs in which war will not exist. The goal of pacifism is a warless society BUT under exactly the same form of production and in the same social conditions as at present. War is inseparable from capitalism it follows that the “abolition” of war is possible only through the overthrow of capitalism and the building of socialism. The pacifist would rather we first get rid of war, then talk about socialism. Pacifism spreads illusions about the nature of war and of the fight against war (advocating disarmament, conscientious objection, non-aggression treaties, UN mediation, etc., as solutions), and thus prevents a real struggle against war, which can be based only on a true understanding of the nature and causes of war. The UN will keep peace as long as peace is to the interests of the powers that control the UN. Pacifism turns aside the working class from its struggle for power, the only genuine way to fight war. In this way it redirects the revolutionary struggle against war into “safe” channels.

The goal of socialists is a society without exploitation, the society in which the demand for the complete abolition of private property in the means of production will be realised. This condition of human society accomplishes the objective of permanent warlessness. War must be made impossible by destroying its deepest and best hidden roots. Socialists are not satisfied with destroying the poisonous fruit - war. Socialist anti-war activity is only part of the general struggle for emancipation of the working class. Pacifists believe that the struggle against war can be carried on independently of the class struggle.

Before being able to combat an evil, one must know its cause. Thus, seeking the primary cause of war is the first step in preventing it. Even a brief study of the nature and causes of modern war proves that war is an essential part of capitalism. The inner conflicts of capitalism lead and must lead to war. The only way actually to get rid of the high fever is to remove the cause of the fever –if it is a diseased appendix then take it out. The same thing is true for war: the only way to get rid of war is to remove the cause of war. War is not the cause of the troubles of society. The opposite is true. War is a symptom and result, of the irreconcilable troubles and conflicts of the present form of society, that is to say, of capitalism. The only way to fight against war is to fight against the causes of war. Since the causes of war are part of the inner nature of capitalism, it follows that the only way to fight, against war is to fight against capitalism. But the only true fight against capitalism is the struggle for socialism. It therefore follows that the only possible struggle AGAINST war is the struggle FOR the socialist revolution.

There is no “separate” or “special” struggle against war. The struggle against war cannot be divorced from the struggles of the workers. No one can uphold capitalism – whether directly, as an open adherent of the capitalists, or indirectly, from any shade of liberal or reformist position – and fight against war, because capitalism means war. To suppose, therefore, that the Socialist Party can work out a common platform “against war” with non-socialists is based on a misunderstanding. Pacifists are not merely powerless to prevent war; in practice it acts to promote war, both because it serves in its own way to uphold the system that breeds war, and because it diverts the attention away from the real fight against war. There is only one policy against war: advocating socialism. By overthrowing capitalist economy and supplanting capitalism with a socialist economy, it will remove the causes of war. With socialism there will no longer exist the basic contradictions that lead to war. The expansion of the means of production, under the common ownership and democratic control of society as a whole, will proceed in accordance with a rational plan adjusted to the needs of the members of society. Socialism will remove the artificial limits on consumption, and hence permit the scientific and controlled development of production. Thus, with socialism, war will disappear because the causes of war will have been removed.

Pacifism aids war by spreading illusions about the nature of war and the fight against it; by shifting the energies of honest opponents of war to a fictitious fight against it; by sugar-coating the realities of capitalist society and thus making them – including war – more palatable; by subordinating the working class to middle class individuals and ideas; by preparing the betrayal of the masses in the next war, when outstanding pacifist leaders will decide in the crisis that, this war is different – is for democracy, culture, God, or what not – and call for support of the government. No, the pacifist way is not the way to fight war. War and militarism must be approached by the working class from a class standpoint. War is a manifestation of capitalist society. War remains as long as capitalism remains.

All across the globe people have always been fighting for peace between nations. However, the preaching of peace does not necessarily further the cause of peace. Pacifism as a policy may look plausible so long as peaceful relations prevail but it collapses like a pricked balloon as soon as hostilities are declared. In previous periods many professional pacifists have turned into fanatical war supporters once the ruling class has plunged the nation into battle.

The Socialist Party is not a pacifist organisation. Indeed, we are opposed to pacifism, the reason being that pacifism is completely ineffective as an instrument for preventing war. This has been shown again and again. Pacifism’s weakness lies in its failure to diagnose the causes of war. Pacifism tends to regard war as simply the product of misguided foreign policies or the ations of aberrant politicians. In reality war has much deeper roots. Its main cause in the modern world is the capitalist system, which subordinates all production, and with it the whole of society, to the struggle for capital accumulation, which by its very nature is competitive. If pacifism succeeded in converting a huge majority to ‘non-violence’ it would still not be able to prevent war. The only way to abolish war is to abolish the system that generates it, and replace competitive production for profit by collective, cooperative, production for need. By counter-posing the struggle for peace to the struggle for socialism pacifism encourages the idea that mere could be a violence-free, war-free capitalism. The pacifists proceed on the utopian premise that the laws of capitalist competition can be nullified by the cooperation of people of goodwill who can prevail upon the capitalist class to refrain from war-making. Pacifists oppose the development of the class struggle in favour of class peace at almost any price. Pacifist ideology disorientates anti-war movements.

The task of the Socialist Party is to direct anti-war protest into class-war. It seeks to promote socialism by the workers.
By ajohnstone at October 31, 2015