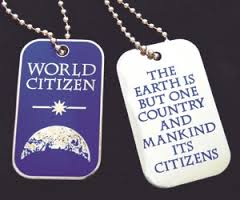 Rather than the slogan “Workers of the World Unite!” Left nationalists seek to replace it by: “Nations divide!” Nationalism is a curse. It leads to chauvinism and to national aggression. It leads to a patriotism for the soil, for the particular bit of the Earth’s surface on which a particular person has been born. It leads to bigotry, to national jealousy and petty pride. Nationalism is the best of cloaks for the intrigues and machinations of politicians and capitalists.

The exploitation of wage labour, competition, the suppression of competitors among the capitalists themselves, the resorting to war, the utilisation of all means to secure a monopoly position in its own country and throughout the world - such is the inherent character of the profit-seeking employing class. This is the class basis of nationalism. At home, the capitalist subordinates the interests of the nation as a whole to its own class interests. It places its class interests or the interests of a certain top stratum of society above the interests of the whole people. Moreover, the bosses pose as the spokespersons of the nation and the defender of national interests in order to deceive the people. Abroad, at the same time, it counterposes the interests of its own nation (in essence, of its bourgeois top stratum) to the interests of other nations. The bourgeoisie strives to place its own nation above other nations and, whenever possible, to oppress and exploit other nations, completely disregarding their interests. Oppressor nations may become oppressed nations and vice versa.

The victorious working class will have neither to keep its ancient nationalities nor to constitute new ones, because by becoming free it will abolish classes: the world will be its father/mother/homeland. The peoples of the globe will fraternise and they will stretch out their hands to one another. Mankind will continue to set itself new tasks and their accomplishment will lead to a stage of cultural development which will not know national hatred, wars, religions strife and similar remnants of the past. It is the duty of the socialist party of every country to combat patriotism and nationalism at home, i.e., from within, at every turn.  In these times when the poisonous fumes of nationalism are corroding society, we ought to do all in our power to keep alive the spirit of internationalism.

Left nationalists such as those in RISE pretend to be revolutionaries. There are no shortcuts to the socialist revolution, and those who enter the nationalist paths divert the coming of a socialist movement by chasing illusions. They want to rally the working class behind the nationalist cause. But nationalism disarms the workers. Shall we fight only to have a Scots-born bosses instead of English one? Shall we unite with these small Scottish homeland exploiters in order to defend “their” nation against the bad, bad English? That is pure folly.  Nationalism is a vain attempt to rally the working class behind the cause of our home-grown capitalists seeking a better place in the sun. Nationalism does not oppose capitalism. The social revolution is an immense task and Left nationalists are intent upon making it more difficult. Independence (now) and socialism (oh, we’ll see, perhaps sometime later...). The socialist revolution is clearly not a task on the Left nationalists’ agenda. No one is going to hand workers socialism on a silver platter...least of all nationalists.

The capitalist class is international – state borders do not divide them. The working class, on the other hand, are separated by these borders. They prevent us from travelling freely, they restrict us to where we live and work. Borders hinder workers unity in resisting employers.  The capitalist class organises internationally. And it wants to obstruct our class from doing the same. The Scottish working class is exploited in the same way as the English working class, the same way as the German or French worker: by the Scottish, English, British , European and international capitalists and in many cases, by the very same multi-national corporation. The social evils experienced by the Scottish people are the very same miseries shared by workers of all nations. Austerity doesn’t stop at the border. An independent government in Scotland would make all the same cuts to working class living standards if the capitalist ruling class demanded it, and it would put corporations and profits before the needs of the people. And to counter the ensuing class conflict and to prevent the rapid disillusionment of many men and women workers, an independent Scottish government would exploit nationalistic feelings to the hilt. It would strongly encourage narrow-nationalism, pushing for “national unity”, extolling sacrifice for the “pride of the nation.”

Our goal is a society without classes. In a classless society where man's exploitation of man is abolished, there will not be some kind of oppression of the smaller ethnic groups, but each people group’s free development is prerequisite for all people’s free development. Our political object is universalist: It is for all human beings.