This is what socialism is 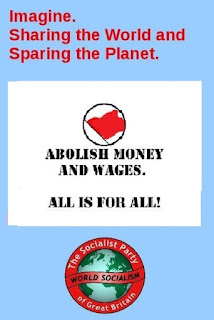 The Socialist Party struggles for the complete victory of the social revolution of the working class. The advances of human society in economy, science, technology and standards of civic life have already created the material conditions necessary to set up a free society without classes, exploitation and oppression, i.e. a world socialist community. Marxism is a very coherent explanation of capitalist society. It is the indictment of a particular section of society – the wage-workers– against the existing relations. It is an analysis which contends to be the true explanation of society and there is no reason to reject it, and the recent world developments only more emphatically prove its legitimacy. Marxism proposes that economic relations determine society’s political and cultural life. Everyone knows that it all comes down to profits and labour productivity. At the back of their mind, everybody knows what the state is good for, what the police and the army have been built for. All know that there is an incessant conflict going on within society between the employer and the employee; that any trace of freedom and humanity has come from the power of worker and working-class organisations to prise gains from business and their state. People naturally expect unions to be against exploitation and discrimination, to stand for social welfare, and so on. Intellectuals considers the Marxist label as boost to their credentials (deservedly or not) and dress themselves up in the Marxist garb. Nationalists, and reformists and a whole host of other tendencies had turned to Marxism. We need not a revision of Marxism but the application of it to the contemporary world.

To this day, socialism, in the sense meant by Marxists, has not been set up anywhere. Marx was the most important and profound critic of the dehumanisation of humanity under capitalism. In capitalist society the human being is slave to blind economic laws which determine his/her economic fate, independently of his/her thinking, reasoning and judgement. Socialism aims to return this identity to human beings. The slogan `from each according to ability, to each according to need’ is entirely based on the recognition and guaranteeing of the right of every person himself/herself to determine his/her position in society.  Socialism is a society in which human beings gain control over their economic lives, are freed from the chains of blind economic laws and themselves consciously define their economic activity. The decision is with the person not with the market, or accumulation or surplus value. This liberation of entire society from the blind economic laws is the condition of emancipation of the individual and the restoration of humanity and human specificity of every individual. The basis of socialism is the human being – both collectively and as an individually. Socialism is the movement to restore man’s conscious will, a movement for freeing human beings from economic necessity and enslavement in pre-determined moulds. It is a movement for abolishing classes and people’s classification. This is the essential condition for the growth of the individual.

Technical innovation and improvement in product quality is not an invention of capitalism. Human beings are always eager for knowledge and improvement in production techniques and in the quality of their lives. In capitalism it is the market that defines the needs and the level of demand for the commodities which satisfy them. Capitals which produce these commodities make profit. It is through these capitalist equations that scientists and experts find and take up their researches and projects. It is here that the proportion of society’s resources which should be set aside for scientific research, the direction science and its practical application should take, the areas which have priority are decided. In socialism, on the other hand, there is no market, no competition and no individual interest. But people and their scientific curiosity and drive for innovation and to improvement of the quality of life are there. A socialist society is an open and informed society. In socialism it will be a routine procedure to constantly inform people about the needs and problems in the various areas of human life worldwide. Under capitalism it is the market that informs capitals about the existence of demand and the opportunity of making profit in the production of certain commodities. In the socialist system it is the citizens and their institutions that constantly inform each other of the economic, social and human needs, as well as of the scientific and technical advances of the different sectors. Given the present technology, the organization of such information interchange and of everyone’s constant access to it is feasible even right now. A socialist society will be a society in which people enjoy a much higher level of scientific education than today. Access to learning and participation in scientific activity is not a privilege of a particular social group; it is everyone’s elementary right. Just as once literacy was the privilege of a few but today is regarded as a basic right. We see even today how, for instance, using computers and even their relatively complex and specialized application, at least in the more advanced countries, has become so generalized – though still a far cry from socialism’s capability in promoting general scientific capacities and making the means for scientific work accessible to all.

Capitalism has itself brought about striking technical changes but in this society technology develops where it is profitable for capital. Alongside the enormous progress in the development of armament technology we see the advances in medicine and health care, education, housing, agriculture thwarted by lack of investment. And the majority of the people of the world is deprived of the results of this technological progress. Socialism will certainly be different from capitalism, since the technical priorities of a society based on improving people’s lives will be totally different from a society driven by the profit motive.

Capitalism’s stereotyped picture of the human being and human motivation cannot be a starting point for the organisation of socialism. Capitalism builds on individual self- interest and competition. To make the economy work, it bolsters these qualities in people and trains them in this spirit. The basis of socialism, however, is man’s humanism and his social nature. Scientific effort and the socialist ideal cannot be realised without getting rid of the intellectual prejudices fostered by capitalism. Like any other social system, socialism will reproduce the appropriate human being and it is not difficult to imagine a society in which people’s motivation in their economic and scientific activity is to contribute to the well-being of all, to participate in a common effort to improve the lives of all.

The realisation of socialism is the result of class struggle, and this struggle is capable of defeat so capitalist barbarism, on a scale perhaps not yet experienced by our generation, can be the outcome. There is now a need to express the socialist vision in more concrete terms and offer more practical models of economic organisation in socialist society and elaborate further. If you’d put this question to a Marxist at the beginning of the century he or she would reply that it is not for us to devise blueprints and utopias, that our task is to organise a revolution against the existing system, that our goals are clear and the process of workers’ revolution itself will provide the practical forms of their realisation. The rise of capitalism itself was not on the basis of a clear positive model of the system. But what has to be done is, firstly, to clarify the precise meaning of socialist aims, and, secondly, to show the feasibility of their realisation. It must demonstrate, for instance, that the abolition of capitalist ownership does not mean introduction of state ownership, and explain how the organisation of people’s collective control over means of production is practical. It must be emphasizes that socialism is an economic system without money and wage labour, and then shown how organizing production without labour power as a commodity is feasible. What cannot be done is to prepare a detailed blueprint of production and administration in a socialist society. The specific form of economy, production and system of administration in a socialist society should be worked out in the context of the historical process. Our job to show in what ways socialist society differs from the existing one. For example, we show the process of the withering away of the state following a workers’ revolution by explaining the material basis of the state in class society and its superfluous requirement as a political institution in a classless society, and not by issuing a step-by-step pamphlet dismantling of state institutions and departments.

We can always find people who shrug their shoulders at socialism, at socialist organization and even at having lofty ideals. Deriding socialism and workers has always been rewarded by the elite. Perhaps more intellectuals and academics than ever before, in the media, universities and the various think-tank institutions have turned it into ‘honourable’ profession. This is not our concern. More important today is implanting Marxist ideas and actual involvement in working-class mass movements. We emphasise the terms Marxist because for many on the left protest simply means anti-capitalism and not proposing socialism. Many times what is meant left activism is participation in reform movements or democratization of this or that political regime, and so on. The world is full of campaigns and protesters who carry out ‘alternative’ activity only later to find it incorporated into the established tradition. The ruling class are putting up its own economic, political and cultural ‘alternatives’ – from nationalism to religion, neo-fascism and racism. The period we are entering will not be lacking in working class protest movements and actions. But the outcome of these struggles and specifically their impact on the general conditions of workers in society, their power and dignity, is another question. It requires an active socialist movement in society and a revolutionary presence within the workers’ movement.