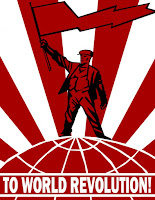 You shouldn’t take much stock in a news story that shows no proof of their “claim”. After all, without proof, they are just “claims.” Don’t buy into it. Don’t assume they are true because you saw it on the news. News is scripted these days, literally. Scripts are sent around that most major channels report. They get photo-genic people to tell you what they want you to be told. They “spoon-feed” you information but it doesn’t make it truth. Workers don’t need a crystal ball to see their future. The capitalists and their state, in their never-ending grasp for higher profits, are willing to inflict misery upon the majority of working people. The problem is that people accept capitalism and its logic and therefore see no alternative to the current misleaders who defend that system at all costs. The media provides workers with blinkers to see only what their masters wish them to see.

The capitalist owner of industry has only one reason to run his factory – profit. Under capitalism, the needs of the people for various goods are not the PRIMARY purpose of production. All he asks is: “Which will pay more?” The fact that the millions of people depend upon industry for food, clothing, housing, furniture, transportation, communications and amusement is of interest to the capitalist only as the “market” in which he can realise a profit. He runs his factory as he pleases. If there is profit in production he hires and offers overtime. If profit falls off, he throws his workers into the street. He operates without social purpose. His only gods are the Almighty Dollar and Dividends. Capitalism kills and cripples millions in its wars, in class strife and civil war, in hunger and freezing, in industrial accidents and disease, in malnutrition and child labor, in poverty and crime. It destroys the wealth of society and wastes the labour potential of millions. That is why capitalism is more destructive than all the earthquakes, tornadoes, floods, cloudbursts, tidal waves and volcanic eruptions ever visited upon earth from the beginning of time.

Capitalism created a class of owners pitted against a class of workers – at war with each other – engaged in a CLASS STRUGGLE with each other. It is the system of COMPETITION – It is the system of dog eat dog, the law of the jungle. Capitalism pits worker against worker in bidding for a job. It pits capitalist against capitalist in the fight for profits. It pits workers against capitalist in class struggle for a share in what is produced. It pits capitalist nation against capitalist nation in war. It pits manufacturers against consumer, landlord against tenant, farmer against city dweller, white against black, Gentile against Jew. Jew against Muslim. All in the mad race for a crust of bread, for survival, for security. In an age when plenty is possible for all! Ask yourself WHY?

Socialism is a call for sharing and caring. Socialists do not rape the planet and do not worship efficiency at the expense of people and nature. All socialists work for humanity’s fulfillment. By "Revolution", we mean the establishment of world socialism and a humanity freed from the bondage of capitalism. Producers in spite of being the most necessary element of society, are robbed by their exploiters of the fruits of their labour and deprived of their elementary rights. A radical change, therefore, is necessary and it is the duty of those who realise it to reorganise society on the socialist basis. Unless this thing is done and the exploitation of man by man and of nations by nations is brought to an end, sufferings and carnage with which humanity is threatened today cannot be prevented. All talk of ending war and ushering in an era of universal peace is undisguised hypocrisy.

The answer to is not reforms but a new society which will have real solutions for all based on human needs, not profits, by expropriating the capitalist class and thereby using all the resources of society for the benefit of all, it would ensure an advancing standard of living for all the people. Many workers believe that the government can deliver concessions for them. We point out that under capitalism such a hope is unrealisable. Capitalism cannot sustain a renewed welfare state and its attacks will inevitably increase if we allow the system to continue. The reformists display little sense of the realities of capitalism with many believing that the growth of the welfare state will turn into socialism as time goes on. Faith that capitalism can be reformed is prevalent yet only presents an acceptance of austerity, cloaked in the illusions of a false promise of future prosperity.