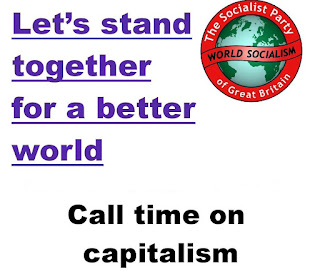 It is at the point of production exploitation takes place. Robert Tressell's ‘Ragged Trousered Philanthropists’ piece on waged slavery is still applicable today.

Poverty is both actual and relative.

Capitalism is global and will continue to exploit locally and globally to extract surplus value from the workers it employs on a waged rationed access basis. It must 'exploit or die' its watchword, Accumulate! Accumulate!
"…capital comes dripping from head to foot, from every pore, with blood and dirt". (Marx)

We need to have a dialogue with fellow workers worldwide, and make our common cause about abolishing waged slavery and establishing a post-capitalist commonly owned world of free access for all, in re callable delegated democratic conditions of social equality.

The Socialist Party of Great Britain speakers, who had a platform in Royal Exchange Square in Glasgow on most Saturday afternoons espoused the unequivocal case for socialism. They were and still are, the only political party who don't want to be leaders or 'guvnors', insisting, 'don't vote for us if you don't understand', that the task of bringing in socialism is the task of the working class themselves and pointed to self-education allied with political action as the means of self-liberation.