The struggle for socialism 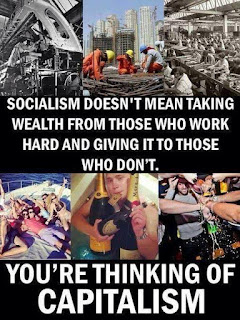 Hunger is the daily lot of millions of individuals, yet tons of food are thrown out with the garbage. Anger is growing everywhere. Today, many people are conscious that capitalism is not paradise on earth. In fact, the material conditions of the masses are constantly deteriorating. The working class must assume its historic mission and fight for the abolition of class society and the complete elimination of the exploitation of man by man.

Capitalist production is characterised by the greatest chaos. Each capitalist and every enterprise, does not seek the well-being of society in general: it seeks its own profit. It thus produces what is profitable; and that, only when it is profitable. When market conditions are favourable all the capitalists and all the enterprises, without exception, go full swing into production so as to be the one who will profit the most, the fastest…until such time as the market can no longer absorb such an influx of products. Businesses must temporarily, and perhaps permanently, close their doors, and workers by the thousands and tens of thousands are reduced to unemployment.

The working class must guard against these sleight-of-hand artists who claim to want to do away with capitalist exploitation but who adhere to a policy of collaboration with the class whose very reason for existence resides in the continued existence of capitalism. There has been a steady growth of nationalism in all regions of the world in recent years; the working class must be remain on its guard against it. Nationalism is always a reactionary ideology. It is a dangerous weapon in the hands of the capitalists who make regular use of it. The result? The peoples of the world have shed their blood repeatedly in the many so-called liberation struggles. It does not take much reflection to realise that so-called the anti-imperialist line is nothing but a mask to cover up clear nationalist aims. We can say that these national liberation struggles have, by and large, succeeded in deflecting the struggles of peoples away from the revolutionary path of socialism. This nationalist conception furnishes the pretext for ignoring the socialist revolution as an immediate question everywhere in the world, in favour of the struggle against the “imperialist superpower” . The “struggles-to-be-waged-while-we’re-waiting” provide a justification for the support of the “positive actions” of “their” national bourgeoisie and of all the other native bourgeoisies except for “the most dangerous one”, all in the name of national sovereignty. Only the working class can carry the revolution through to the end, to the abolition of capitalist exploitation. It is the only class that has a fundamental interest in putting an end to capitalism.

The struggle for socialism has stagnated because the working class and peoples have remained dominated by the opportunism of reformists and nationalists. They give the working class no inspiring goal beyond the ceaseless, bitter and exhausting struggle for economic reforms whose benefits are cancelled out by the system of commodity production. Consequently they do not tell the working class of the necessity for a socialist system nor how to achieve socialism. It is part of a deliberate and well-organised attempt to compel the majority of the population, to deny their socialist destiny – in a world where the natural resources, the productive capacity and the social forces needed to reach this goal of liberation are present in the greatest abundance.
By ajohnstone at October 28, 2015