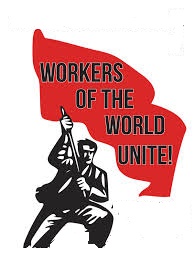 The Socialist Party is pledged to abolish the capitalist system, class-rule and wage-slavery—a party which does not compromise. A socialist economy must be an economy without wages. It is simply a question of capitalism or socialism, of despotism or democracy, and they who are not wholly with us are wholly against us. No sane person can be satisfied with the present system. When you are born you have a right to live like everybody else and socialism assumes that you have the common sense to get up and contribute something to society according to your creative ability. To change the world and to create a better one has always been the aspiration of people throughout human history. It is true that some portray the present plight of humanity as somehow given and inevitable. Nevertheless the actual lives and actions of people themselves reveal a deep-seated belief in the possibility and even the certainty of a better future. The hope that tomorrow's world can be free of today's inequalities, hardships and deprivations, the belief that people can, individually and collectively, influence the shape of the world to come, is a deep-rooted and powerful outlook in society that guides the lives and actions of vast masses of people. The Socialist Party shares this belief of countless people and successive generations that building a better world and a better future by their own hands is both necessary and possible.

The capitalist system is behind all the ills that burden humanity today. Poverty, deprivation, discrimination, inequality, political repression, ignorance, bigotry, cultural backwardness, unemployment, homelessness, economic and political insecurity, corruption and crime are all inevitable products of this system. No doubt bourgeois apologists would rush to tell us that these have not been invented by capitalism, but have all existed before capitalism, that exploitation, repression, discrimination, women's oppression, ignorance and prejudice, religion and prostitution are more or less as old as human society itself. We answer:

Firstly, all these problems have found a new meaning in this society, corresponding to the needs of capitalism. These are being constantly reproduced as integral parts of the modern capitalist system. The source of poverty, starvation, unemployment, homelessness and economic insecurity at the end of the 20th century is the economic system in place at the end of the 20th century. The brutal dictatorships, wars, genocides and repressions that define the life of hundreds of millions of people today draw their rationale from the needs of the system that rules the world today and serve specific interests in this world.
Secondly, it is the capitalist system itself that continually and relentlessly resists people's effort to eradicate and overcome these ills. The obstacle to workers' struggle to improve living conditions and civil rights is none other than the bourgeoisie and its governments, parties and apologists. Wherever people rise in the poorer regions to take charge of their lives, the first barrier they face is the armed force of the local ruler. It is the capitalist's state, its enormous media and propaganda machinery, institution of religion, traditions, moralities and educational system which shape the backward and prejudiced mentalities among successive generations. There is no doubt that it is capitalism who stand in the way of the attempt by millions of people to change the system. The capitalist system and the primacy of profit have exposed the environment to serious dangers and irreparable damages. This is the reality of capitalism today, boding a horrifying future for the entire people of the world. For sure, present society is no doubt complex and sophisticated. Billions of people are in continuous interaction in elaborate arrays of economic, social and political relations. Technology and production have acquired gigantic dimensions. Humanity's intellectual and cultural life, just as its problems and difficulties, are broad and diverse. But these complexities only keep out of sight simple and comprehendible realities that make up the economic and social fabric of the capitalist world.

Like any other class system, capitalism is based on the exploitation of producers — the appropriation of a part of the product of their labour by the ruling classes. Under slavery not only the slave's product but he himself belonged to the slave- owner. He worked for the slave-owner, and in return was kept alive by him. In the feudal system the peasants either handed over part of their produce to the feudal lord, or performed certain hours of forced and unpaid labour. Under capitalism, however, exploitation has quite different bases. Here the main producers, i.e. the workers, are free; they don't belong to anyone, are not appendages of any estate, they are in bondage of any lord. They own and control their own body and labour power. But workers are also 'free' in yet another sense: they are `free` from the ownership of means of production, and so in order to live, they have to sell their labour power for a certain length of time, in exchange for wages, to the capitalist class — i.e. a small minority that own and monopolise the means of production. The workers have to then buy their means of subsistence — the goods they themselves have produced — in the market from the capitalists. The essence of capitalism and the basis of exploitation in this system is the fact that, on the one hand labour power is a commodity, and, on the other hand the means of production are the private property of the capitalist class.

Under capitalism labour power and means of production are shut off from each other by the wall of private property; they are commodities and their owners must meet in a market. On the face of it, the owners of these commodities enter into a free and equal transaction: the worker sells his/her labour power for certain periods, in exchange for wages, to the capitalist, i.e. the owner of the means of production; the capitalist employs this labour power, uses it up and makes new products. These commodities are then sold in the market and the revenue begins the production cycle anew, as capital. However, behind the apparently equal exchange between labour and capital lies a fundamental inequality; an inequality which defines the lot of humanity today and without whose elimination society will never be free. With wages, workers only get back what they have sold, i.e. the ability to work and to show up in the market once again. By its daily work the working class only ensures its continued existence as worker, its survival as the daily seller of labour power. But capital in this process grows and accumulates. Labour power is a creative power; it generates new values for its buyer. The value of the commodities and services produced by the worker at any cycle of the production process is greater than the worker's total share and that portion of the products which goes into restoring the used up materials and wear and tear. This surplus value, taking the form of an immense stock of commodities, belongs automatically to the capitalist class, and increases the mass of its capital, by virtue of the capitalist class's ownership of the means of production. Labour power in its exchange with capital only reproduces itself, while capital in its exchange with labour power grows. The creative capacity of labour power and the working class's productive activity reflects itself as the birth of new capital for the capitalist class. The more and the better the working class works, the more power capital acquires. The gigantic power of capital in the world today and its ever-expanding domination of the economic, political and intellectual life of the billions of inhabitants of the earth is nothing but the inverted image of the creative power of work and of working humanity.

Thus, exploitation in capitalist society takes place without yokes and shackles on the shoulders and feet of the producers - through the medium of the market and free and equal exchange of commodities. This is the fundamental feature of capitalism which distinguishes it in essence from all earlier systems. The surplus value obtained from the exploitation of the working class is divided out among the various sections of the capitalist class essentially through the market mechanism and also through state fiscal and monetary policies. Profit, interest and rent are the major forms in which the different capitals share in the fruits of this class exploitation. The competition of capitals in the market determines the share of each capitalist branch, unit and enterprise. But this is not all. This surplus pays whole cost of the bourgeoisie's state machinery, army and administration, of its ideological and cultural institutions, and the upkeep of all those who, through these institutions, uphold the power of the bourgeoisie. By its work, the working class pays the cost of the ruling class, the ever-increasing accumulation of capital and the bourgeoisie's political, cultural and intellectual domination over the working class and the entire society.

Technological progress and rise in labour productivity mean that living human labour power is increasingly replaced by machines and automatic systems. In a free and human society this should mean more free time and leisure for all. But in capitalist society, where labour power and means of production are merely so many commodities which capital employs to make profits, the substitution of humans by machines manifests itself as a permanent unemployment of a section of the working class which is now denied the possibility of making a living. The appearance of a reserve army of workers who do not even have the possibility of selling their labour power is an inevitable result of the process of accumulation of capital, and at the same time a condition of capitalist production. The existence of this reserve army of unemployed, supported essentially by the employed section of the working class itself, heightens the competition in the ranks of the working class and keeps wages at their lowest socially possible level. This reserve army also allows capital to more easily modify the size of its employed work force in proportion to the needs of the market. Massive unemployment is not a side-effect of the market, or a result of the bad policies of some government. It is an inherent part of the workings of capitalism and the process of accumulation of capital.
By ajohnstone at October 07, 2015