Crapitalism because capitalism is shit 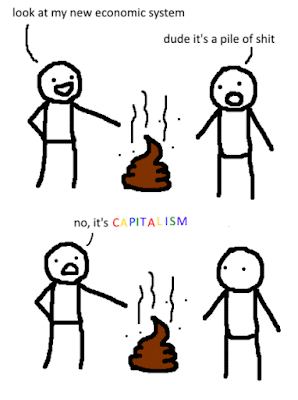 Once we have got the solidarity act together worldwide, we can get rid of the capitalist system which of which war and poverty, absolute or relative are concomitant and establish a democratic, commonly owned world, with free access to the wealth produced. The majority support capitalism as they know of no alternative and can be persuaded by the illusory promises of reforms and tricked by statist panaceas from the left into confusing state ownership with common ownership. It is nothing of the kind. The best way to get reforms is to advocate revolution. All you need is the majority to be persuaded to this end. “Cuddly” capitalism will be rolling on its back to have its belly tickled, but nothing will stop an idea when its time has come.

Workers not only produce all of the wealth but effectively run capitalism from top to bottom. Far from being termites or ants to be ordered by overlords, private or state, human beings are social beings who do not just live within structured systems but consciously act to change them. A politically aware majority who dispense with private, corporate, or state, ownership of the means and instruments for creating wealth and opt to establish a commonly owned production for use society, will be more than capable of running it democratically, (delegating recallable delegates when specialisation is called for) with free access to the collective produce, without elites or government oversight.

Profit can ONLY come from the exploitation of the vast majority. Poverty absolute and relative is essential for capitalism to function. The capitalist class themselves are subject to market conditions. The illusion of democratic control over ungovernable economic forces scarcely addresses this point. While some plutocrats and oligarchs may indeed be monsters, most of them are merely reacting to the malign anarchy of the impersonal market. You just can't have a nicer capitalism. Capitalism cannot be reformed, as the market reasserts itself once profitability is eroded. We can use the Achilles heel of capitalist democracy to usher in a commonly owned, free access, post-capitalist world. Capitalism is past its useful retirement date since the beginning of last century, hence two world wars and innumerable proxy ones. Capitalism is not forever. No social system is.

All capitalist economies are determined by the realisation of profit … Profit is the raison d’être. As a result, if profits are declining, or by scrapping unprofitable plant or machinery profits will increase, it is quite usual for productive capacity to be scrapped. Profit can ONLY come from the exploitation of the vast majority. The illusion of democratic control over ungovernable economic forces scarcely addresses this point. Only a commonly owned, production for use free access society does so. Governments don't bring economic failure or success. It is the trade cycle of capitalism which brings in opportunities for employers to exploit workers of their surplus value. If there is no such opportunity the richest will gamble on the stock exchange or move their capital into lucrative ventures elsewhere. Their golden rule is to accumulate! accumulate!

A post-capitalist world, utilising the under-used productive potential of previously existing capitalism, but where food clothing shelter and any other necessities cease to be commodities to be traded, in the interests of a minority parasite class but are for the freely available use of everyone to satisfy human needs in abundance.

The Labour Party which was never a socialist party but existed as a combination of Liberals and trade union reformers, with the purpose of gaining reforms for working people, rather than the overthrow of existing social relations of production. Some, known as “Gradualists”, had the view that capitalism could gradually be reformed into something it was not, providing a convenient stick for unabashed supporters of capitalism to show that Labours misnamed 'socialism' doesn't work when the inevitable crisis of capitalism emerges from the trade cycle of capitalism. As long as you keep settling for a reformed capitalism, you will get waged slavery, if you are lucky, a food bank if not.

Socialism isn't 57 varieties despite politically manipulated appearances. It has a definition i.e. the common ownership and democratic control of all the means and instruments for creating and distributing wealth. Socialism requires the support and active participation of the immense majority, who are politically aware of its implementation being, indeed, a revolutionary break with the capitalist mode of production for sale and introduction of the socialist/communist/post-capitalist mode of production for use. Socialism/Communism/Marxism is a post-capitalist society, where the means of production and distribution are owned in common, by us all and not the state. There are NO means of exchange, as it is a free access society and the absence of a leading economic elite, renders the state also, obsolete

Don't settle for crumbs. We have the world to win. Time for a societal upgrade for the 21st century and beyond.

"Rise, like lions after slumber
In unvanquishable number!
Shake your chains to earth like dew
Which in sleep had fallen on you:
Ye are many—they are few!"