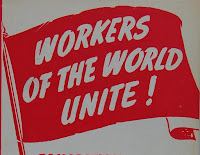 Capitalism is class rule. The economic foundation of class rule is the private ownership of the necessaries for production and distribution. The social structure, or garb, of class rule is the political state that functions for the maintenance of the supremacy of the ruling class. The overthrow of class rule means the overthrow of the political state, and its substitution with industrial democracy, under which the necessaries for production are collectively owned and operated by and for the people. Goals determine methods and methods must fit the goal. The Socialist Party is engaged in a struggle to overthrow capitalism and end the exploitation of man forever, creating a class-free world, where people live from birth to death never having to suffer under the chains of wage-slavery.

While the capitalists are recovering from their Great Recession of 2007, socialists are wondering how far fellow-workers have risen from the rock bottom of their despondency and despair. A sense of hopelessness prevails everywhere. Practically every union is rapidly losing its membership. Few have shown any fighting spirit. Many have been heavily defeated. The union leaders have made no attempt to stem the tide of retreat. Retreat, Retreat, always retreat. The employers have got them on the run. This state of affairs is appalling. The situation is indeed serious. The immediate situation demands resistance. The promises of the Labour Party are nothing more than vote catching affairs. Labour politicians flatters the workers’ ignorance and prejudice to keep them ignorant. The working class can either consciously and fearlessly fight for power or see its organisations disintegrate and its life crushed to ever lower standards.

The reason that many on the Left hate the ballot box is because they know they are the minority and have not the patience to await the test of discussion and time. They don’t want the counting of noses, because they know the count will go against them, and because voting requires deliberation. They don’t want deliberation, they want excitement and hysteria and hope to carry their case on a wave of blind emotion. At the back of all this there always crops out the elitist vanguardist contempt of majority rule. The Left believe that the majority of people are fools who have to be led by an “enlightened minority.” They believe themselves to be the enlightened minority. They would lead us into “mass” actions, street protests and riots that play right into the capitalists’ hands.

The Socialist Party participate in electoral activity to take advantage of the interest aroused among the workers during election times for revolutionary agitation and organisation of the workers; to point out that the Socialist Party does not seek seats in order to use the parliament for reforms but to use it as a forum where capitalism is exposed and the illusions of the workers in it are shattered; and to explain that reforms cannot improve their wretched lot which is produced by the system as a whole. The Socialist Partyhas made itself unpopular because it has the honesty to tell the workers that they are ignorant and that they will remain where they are so long as they are ignorant, indifferent, and unorganised. It tells them about the class struggle, not because it is in favour of classes, quite the contrary, because it is opposed to classes and wants to put an end to the class struggle. It is impossible to compromise a principle, and the Socialist Party is committed to a certain principle. To compromise principle is to invite failure. It is better to be true to a principle and to stand alone far better to be in a minority than to be in a majority of the unthinking.