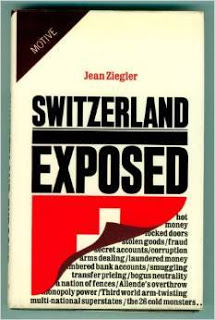 Book Review from the February 1980 issue of the Socialist Standard

Here's an easy one. Which European country does nearly everyone think of as the home of neutrality, winter sports and the cuckoo clock? Obviously, it is Switzerland but what is significant is its importance in the world’s banking system. Swiss banking operates as the leading fence for capitalism’s more dubious transactions and this is why hundreds of banks, finance companies and the like are located there.

Swiss banking’s code of secrecy and protection for customers is the big attraction. Vast sums of money are constantly being sent to Switzerland to avoid paying tax in the countries of origin. The money is changed into Swiss francs, placed in numbered accounts, and then reinvested by the banks. The owners of the funds, besides paying no tax, benefit by having their money in inflation-free currency while the banks, who pay little or no interest because of the service they provide, reap the profits from the investments they make.

Strictly speaking, all this is against Swiss law but the law is never enforced and even if it were numerous ways exist to get around it. Even the wealth stolen by “Third World” heads of state and politicians is safe. Ex-Presidents Thieu of South Vietnam and Lon Nol of Cambodia and ex-Emperor Haile Selassie of Ethiopia all sent immense fortunes in gold and money to Switzerland and none of the new governments can recover a penny of it. More recently the Swiss government refused a request from the Iranian authorities to freeze the ex-Shah’s assets in Swiss banks (The Guardian 11.12.79). The Mafia, too, sends some of its loot to Switzerland to be “laundered” and then returned for reinvestment in legitimate enterprises.

All this information, and more, is given in the book Switzerland Exposed by Jean Ziegler (Allison and Busby, £3.50). Ziegler is a Social Democrat member of the Swiss Parliament and although he uses the terminology of Marxism he understands that subject less well than he does Swiss banking. His thinking is thoroughly idealist. For example, he imagines that if Swiss banking stopped handling this “dirty money” from the “Third World” then this would somehow benefit the poor people who live there. Of course, all that would happen is that the money would simply be sent elsewhere, with Monaco and the Bahamas as possible alternatives.

This blinkered view is due to the fact that Ziegler is another of those who are obsessed by the exploitation of the Third World by the “imperialists”. By these he means the industrialised West only and thinks that China, Vietnam, Cambodia and Cuba have freed themselves from foreign domination. He apparently hasn’t noticed that China is itself now an imperialist power ever seeking to extend its frontiers and influence, while Vietnam and Cuba, although rid of American domination, are now colonised by Russia instead. At present China and Russia are involved in a bloody struggle over Cambodia.

So Ziegler thinks that the West’s domination of the Third World is the big problem and wants to reverse this by giving the Third World a bigger share of the world markets in agricultural produce and raw materials through “international agreements”. This is merely tinkering with capitalism and can only help perpetuate it by diverting working class attention away from the real task, which is to abolish the capitalist system altogether.

An important part of Marxist theory is an understanding of the role of the state. Historically, the state is the public power created by a ruling class to defend its interests. Engels described it as
the state of the most powerful, economically dominant class, which through the medium of the state, becomes also the politically dominant class, and thus acquires new means of holding down and exploiting the oppressed class. Thus, the state of antiquity was above all the state of the slave owner for the purpose of holding down the slaves, as the feudal state was the organ of the nobility for holding down the peasant serfs and bondsmen, and the modern representative state is an instrument of exploitation of wage labour by capital. (Origin of the Family, Private Property and the State.)
Ziegler claims that the Swiss state has only “become” like this, which implies that it had once been impartial. He actually says that the state should operate in the interest of all Swiss citizens! And although he describes the existence of the Swiss army as “social violence institutionalised” he is not opposed to it and merely wants to see workers “reaching the higher ranks”. Could idealism go further?

The author’s suggestions on how to fight capitalism are absolutely disastrous. He wants workers to have “temporary alliances with the class enemy . . .  to further the anti-imperialist struggle”. For example, Ziegler advocates unconditional support to OPEC in its oil price-war with the developed world customers, and Swiss trade unionists are advised to ally themselves with the “national bourgeoisie in their struggle against the growing control exercised by the multinational companies over the nation’s production system. . .”. Such taking of sides in the quarrels of our masters does not weaken capitalism: it gives it strength by causing further division and confusion within the working class and holding back the advance of socialist knowledge.