Why we need a socialist revolution 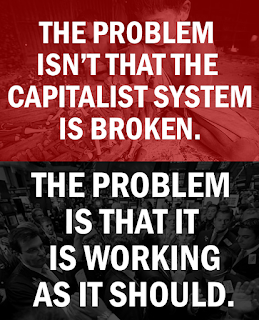 For years the Socialist Party has strived to be the expression of the class-conscious workers. Years of dedicated work has not had the desired result we expected. We took our stand upon the fundamental antagonism of interests between the two classes in society, and we have kept ourselves clear of the crushing influences of both reformism and nationalism. Our vision has always been to fundamentally change the system. We offer a clear class analysis. The world today is a class society, and there is a basic contradiction between the working class and the capitalist class. The social forces which can bring about revolution can be clearly defined. The main social forces capable of creating fundamental social change is the working class. Who are the one class that no society can do without? Those who work. For the working class to assume this crucial role it must be organised, it must have its own political party for the struggle for its empowerment, just as other classes have theirs to enable them to wage political struggle. We must strive to empower the working class because it represents the revolutionary class in society. It is the motor for change in the real world because of its size, its position in society and its relation to the productive process. Today it is those who work who have the responsibility together with the opportunity to reorganise our world. It is going to be difficult, but it is essential. Therefore it must be done. We believe that the clear target of our revolution is the capitalist class.  The Socialist Party states forthrightly that we are fighting for socialism and to fundamentally alter property relations. Revolution means changing property relations. Our socialism will be democratic where the wealth of society will go primarily to those who produce it.

The world is going through some important and momentous changes. The world about us is falling to pieces. Despite the gloating about the failure to bring about socialism, the planet is in deep trouble. All the evils of capitalism have been allowed to flourish openly. The need for some sort of change or in other words, a revolution, is widely realised. The gap between rich and poor is the greatest since the 1930’s. The welfare state and social services created to help the poor are being all but eliminated. Education is failing millions. Racism and hate crime is on the rise. Our environment is being pillaged and plundered for profit. People understand that the world seems to be collapsing, but they do not know what to do about it. We think that we have a clear and more accurate analysis of capitalist society, and an explanation for the tremendous social problems it inflicts upon us. The Socialist Party proposes a clear objective to the people. Being an openly socialist organisation enables us to make more rapid progress in our work. We present a clear view of socialism and advocate a social change which is in the best interest of all people. We explain WHAT we are trying to build, WHERE it is we wish to head and HOW we seek to go. We proudly advocate people not profits. We offer a viable alternative for achieving peace, justice and equality. We advocate peace, justice, equality and socialism.

Socialism is rule by the working people. They will decide how socialism is to work. This was how Marx and Engels defined socialism. They made no attempt to proclaim in advance how a socialist society is to be developed. From the days of the Communist Manifesto Marx and Engels proclaimed on the contrary that the makers of a socialist society will be the workers (proletarians) and that it is the task of socialists (or communists) to help the workers to power but not to decide for them or to lead them. To use the word “socialism” for anything but working people’s power is to misuse the term. State ownership of mines, railways, steel, etc. is not socialism, nor does this constitutes “the socialist sector of a mixed economy”. Such nationalisation is simply a degree of state capitalism, with no relation to socialism. The task of the Socialist Party, therefore, is to help and guide the transfer of power from capitalists to working people. Nor is the “Welfare State” socialist. A socialism will certainly give high priority to health, education, art, science, and the social well-being of all its members. That is why it exists, that is the purpose of its economy. But “welfare” in a capitalist state, to improve the efficiency of that state as a profit-maker, is not socialism but another form of state capitalism. It can be an improvement on capitalism with no welfare, just as a 40-hour week is an improvement on a 60-hour week. But it is not socialism. (A “Welfare State” also inevitably turns into the means tested state, as we have seen.)

The organised workers have been for the past century or more, in a position to capture the machinery of the state, on the one condition that they themselves wish to do so, i.e. that they understand that this is both necessary and possible. The political lessons are clear as could be to anyone who understands the threat and consequences of leaving capitalist in the dominant position of the state. Capitalism is maintained by class power and will only be displaced by other class power. We do not think it any longer necessary to attempt proof of the need for revolution if we are to achieve socialism, i.e. to develop an increasingly classless society. If the working people want power they will have to take it. It will not be given to them. The time is ripe for a worldwide liberation movement that defends and promotes the freedoms of all humanity from the ravaging of the 1%.

“In every age it has been the tyrant, the oppressor and the exploiter who has wrapped himself in the cloak of patriotism, or religion, or both to deceive and overawe the People.” — Eugene Victor Debs
By ajohnstone at August 30, 2016