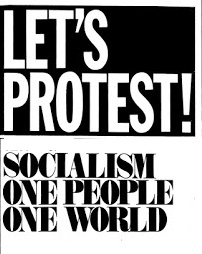 With socialism, we can use the world’s resources, and the accumulated knowledge and skill of our fellow workers to change the face of the planet, to create a world in which poverty, exploitation, and war are just bad memories. It is with that goal in mind that we in the Socialist Party set out. The Socialist Party have no illusions of grandeur. We are a small political organisation with a limited audience at the moment. We have no illusions about the scale of the task, or about the limitations imposed by our size, influence, and talents. We don’t regard ourselves as the elect, the bearers of the truth. We know that only the working class can transform society. We don’t seek to put ourselves in place of that class. We seek only to make workers conscious of their interests and their power and to direct that power at the capitalist system. We appeal to all who agree with us, to join us. People have two roads to follow: Either the road of capital, towards steadily worsening living conditions and increasing misery or the road of revolution and socialism.

A socialist revolution worldwide will mean that the problems of world poverty can be tackled and overcome in a coordinated way and that people will move freely over the face of the globe. It will mean harnessing of all the world’s resources for the benefit of united humanity, will become a reality. Few can deny that the world today is in a constant state of upheaval. That is reflected in the widespread turmoil and conflict not only in the developed industrial nations but also in developing nations throughout the world. The Socialist Party has repeatedly demonstrated that the capitalist system does not and cannot work in the interests of the majority. It is a social system in which society is divided into two classes—a capitalist class and a working class. The capitalist class consists of a tiny minority—the wealthy few who own and control the instruments of production and distribution. The working class consists of the vast majority who own no productive property and must, therefore, seek to work for the class that owns and controls the means of life in order to survive. The relationship between the two classes forms the basis for an economic tyranny under which the workers as a class are robbed of the major portion of the social wealth that they produce. Against this insane capitalist system, the Socialist Party raises its voice in emphatic protest and unqualified condemnation. It declares that if our society is to be rid of the host of economic, political and social ills that for so long have plagued it, the outmoded capitalist system of private ownership of the socially operated means of life and production for the profit of a few must be replaced by a new social order. That new social order must be organised on the same basis of social ownership and democratic management of all the instruments of social production, all means of distribution and all of the social services. It must be one in which production is carried on to satisfy human needs and wants. In short, it must be genuine socialism.

For many on the Left, the working class can’t understand the idea of socialism: only the party can. And socialism is not judged by whether the working people rule, but by whether the new rulers can plan the economy in the name of the “objective interests” of the people where the intellectual Leninist elite battles the capitalists with the goal of better managing the economy for the ignorant masses. We need socialism more urgently than ever. But it won’t come through the vanguardist parties of the Left.

Help us build a world in which everyone will enjoy the free exercise and full benefit of their individual faculties, multiplied by all the technological and other factors of modern civilisation. Despite the many threats to workers’ lives, liberty and happiness today, despite the growing poverty and misery that workers are subjected to, a world of peace, liberty, security, health and abundance for all stands within our grasp. The potential to create such a society exists, but that potential can be realised only if workers act to gain control of their own lives by organising, politically and industrially, for socialism. We can sympathise with any organisation, party, or group that sincerely advocates the self-emancipation of the workers. Even when they themselves are not yet interested in revolutionary ideas, radical groups could discuss on their own how the working class might organise, production, distribution, and control over society. Socialist ideas and the socialist revolution are still evolving.
By ajohnstone at August 04, 2016