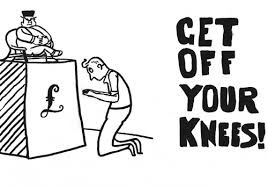 Capitalism has generated within itself a socialised process of production. It has laid the actual, material foundations for the socialist transformation of society. Ideas arise from actual life. They are not innate in man. Their basic determinant is in the material conditions by which man gets his living. Thus all epochs of society have had their own system of ideas, their own belief-system. Ideas have a powerful influence on events. That socialist transformation of society will not come about of itself. It will come about by stages through the actions of men. Those actions will be guided by theory. All facts, natural and social, show that absolutely everything is in the process of movement, of coming into being and passing out of being.  Marx and Engels could not have arisen in times of feudalism because the social process had not yet reached the stage where there was sufficient development. The mass impoverishment generated by capitalist industry gave birth to socialist ideas. Marx and Engels who introduced the idea of development into socialist thought, and perceived the working class not only as it was but also as it was becoming. Through the development of industry the working class would grow in numbers and organization, while gaining constantly in intellectual and moral power. In this way workers would achieve the power to emancipate themselves. To be sure, it would have to be educated to this. But this education, as Marx and Engels understood, could not be brought about by men who proclaimed themselves the schoolmasters of the workers, the vanguardists but through the experience of the class struggle, forced upon the wage earners, by the conditions under which, they lived. The task for socialists was to help it understand the nature of capitalist society.

The working class, under capitalism, are all the people in this society who do not own property or investments or a business from which we can make money from, and therefore we have to sell our time and energy to an employer - a boss. We are forced to work from necessity of requiring the means to survive – to pay for our food, clothing and shelter. Work takes up the majority of our lives. Our work is the basis of this society. Employment and the society that grows out of it are alienating and miserable for us. Even if we enjoy parts of our job we experience it as something alien to us, over which we have very little control. Employers and bosses want to get the maximum amount of work from us, from the longest hours, for the least pay. We, on the other hand, want to be able to enjoy our lives: we don't want to be over-worked, and we want shorter hours and more pay. We are constantly fighting against the imposed conditions of our lives. This is class struggle. Work being forced on us like this compels us to resist. Simply standing up for our own interests brings us into conflict with bosses, and bureaucrats everywhere. By resisting the imposition of work, we say that our lives are more important than our boss's profits. These everyday struggles are a requirement for our survival. The experience of those who are forced to labour and who struggle against the society based on toil, creates certain kinds of ideas. A class conscious working class are those worker who struggles to do away with employment and class divisions, and the society built around them. This attacks the very nature of capitalism, where profit is the most important reason for doing anything, and points to the possibility of a world without classes and privately-owned means of production. We are the working class resisting our own existence. We are the working class struggling against work and class. When we are actively fighting for our own interests, these ideas solidify into an anti-capitalist perspective. We are in an emergency. This is no time for gradualism. Urgency is now of the essence.

Across the world, the capitalist class through its ownership of wealth holds economic and political power. Apart from a few personal possessions and perhaps, if lucky enough, a house without a mortgage attached to it, the vast majority of workers own nothing but their labour power, their ability to work. The wealth is produced by those who work by hand and brain, far in excess of the wages they are paid. The surplus goes to the capitalist owners or shareholders as profit. This is capitalist exploitation, the basis of all forms of rent and interest. A capitalist system is inevitably marked by gross inequality. People are divorced from the process of decision-making.

Two courses are open. Either the present trend will continue. Or steps must be taken to secure full command of the world’s resources, wrest power from the few, end exploitation and use the wealth produced by the people for the welfare of the people. There is no middle way. The only path of advance is towards socialism. Socialism is logical. Socialism means democratic control and common ownership of economic resources, of means of production and distribution. Politically it is power in the hands of the people. Socialism will enable the community as a whole will share and gain from all increases in productivity, all the progresses in science and application of technological discoveries. By ending exploitation it allows people to make their own future. The goal of socialists is to establish the rule of the working people in place of rule by the owners of property.
By ajohnstone at August 01, 2016