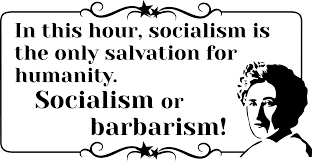 In a social revolution it is really essential that we are building for something and towards something. It is mistake that a lot of people make to think that what is needed is leaders for this movement. The movement is us. This movement needs people from all walks of life to be able to stand up and speak the truth. We have been wage slaves for so long that we have forgotten the knowledge that we are slaves and that there is any other way to live. We have forgotten that once we had land and tools and could live independently, providing for ourselves, our families and our neighbours in cooperative communities, without being forced to sell our labour power for wages. We should not be living as slaves but as free people. If we could denounce and deny the wage slave relationship we could destroy capitalism and free ourselves to create a new social world. Most of the suffering in the world now is directly attributable to the capitalist system. If it were not for capitalists, most of what troubles and ails the world could be cured. The hunger, homelessness, environmental degradation, urban slums and ghettoes, warfare, crime, insecurity, waste, boredom, loneliness, and so forth could be remedied. Even much of the suffering caused by natural disasters such as typhoons, hurricanes, floods, droughts, and earthquakes can be laid at the feet of capitalists because capitalism either causes them or  prevent us from preparing for and responding to these disasters as a community, in an intelligent way.

The actual task of socialists is to transform existing structures (buildings and factories) and social relations (property and work) into the ones we desire. We can convert what already exists into something more useful for democratic, cooperative living. As society progresses we begin to tear down and rebuild what is around us in a way that expresses the needs of the people.

If we truly are a social democracy where everyone’s voice matters. Revolution is not a like a “revolutionary” new detergent. It’s something that people have given their lives for. It’s not something granted by a politician from on high after putting sufficient number of X’s on ballot papers. A real revolution is required. In the past some countries came to be called “communist” but were just capitalist states doing what capitalists always do: enslave and exploit their populations. There arose a Leftist politics that aped that One-Party command economy but now that the Soviet Union is gone, more and more people are realising that those “communist” countries were just capitalism in a different form and had little to do with the struggle against capitalism.

To-day it is impossible to defeat the ruling class by force of arms and insurrection. The level of firepower currently possessed by all major governments and most minor ones is simply overwhelming and has been recognized as so since the pronouncement of Engels in the 19th C. that the days of the barricades was over. For any socialist movement to think that it can acquire, maintain, and deploy a vast armoury of sophisticated weapons is ludicrous. We cannot fight capitalists on their own terms. Non-violence is a key strategy against of a violent ruling class. It means that we have to learn how to depose them without picking up a rifle and firing a single shot. It means that we have to look to other tactics and invent other weapons for a class war. We should, however, not think non-violence is pacifism. Seen in this light, capitalism does not seem so invincible but actually rather vulnerable.

If we walk around our towns and cities, we see houses and factories, shops and malls, offices and schools, theatres and cinemas, restaurants and nightclubs, hospitals and nursing homes, hotels, and whatever. What we seldom come across are actual meeting halls. For sure we see council buildings but they are not where we, the people, can get together to take decisions and administer our own lives. So how can it be said that we live in a democracy, if we don’t even assemble or have any facilities for doing so? Not only is it a slave society but undemocratic society. Rather, we should live in a real democracy, where we can run our own communities. The basic social unit for decision-making will be the neighbourhood assembly. For many purposes, however, these neighborhood assemblies will want to cooperate with other neighbourhood assemblies. They will come together to accomplish certain objectives. In other words, they will sometimes coalesce into larger associations. Similarly, work-places will mirror this re-organisation into interlinked networks. Such changes cannot possibly come over-night even if the process begins before the triumph of the working class and the capitalist class is expropriated and capitalism is destroyed. In order to avoid total chaos and disintegration, most people must go on working at the jobs they have and know. So let us be quite clear, a new socialist society requires to be built on the foundations of the old capitalist system. It will take time to restructure the means of production and distribution into something more fitting for a free people. We have no doubt that workers councils will be able to eventually adapt what exists and create better forms of self-management than the presently existing corporate-controlled ones.

Adapted and abridged from here