Educate that you may be free 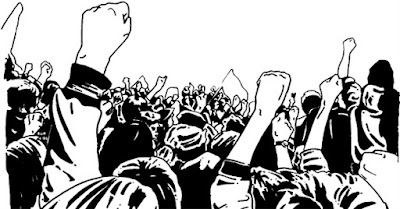 The attitude of the Socialist Party is clear and definite. It claims that the wealth of society is created by the workers. It claims that the workers must own and control all the processes of wealth production. The capitalist class well understands the importance of the ballot box. The Socialist Party says that capitalism is the root cause of the social problems facing the working class. We propose the abolition of the system through the ballot box. We carry this struggle on to the political field in order to challenge the power which the present ruling class wields through its domination of the State which it wins at the ballot box. By its victory at the ballot box, and its consequent political domination, the capitalists are able to enslave working people by creating state ministries which control industrial and social conditions. These state departments are in the hands of bureaucrats who are recruited and promoted. Having been appointed by the master class, who control the state, the government officials can only maintain their jobs by serving those who control them. The destruction of this bureaucracy can only be accomplished by defeating the employing class at the ballot box.

The political state is not and cannot be a true democracy. The Socialist Party is convinced that the present political state, with most of its attendant institutions, must be swept away. It is not elected according to the needs of the community but rather it is elected because the wealthiest section of society can suppress all facts through its power over the media, by using its money to trump up false election issues. Voters are not asked to vote upon facts but only upon such topics as the press, representing capital, puts before the workers.

The Socialist Party contends that the social ills of society will never be cured until organised workers, band themselves together as a class. Some socialists promote the idea of worker and neighbourhood councils as the social structures to organise and administer society on behalf of everyone in the community. But we cannot build up these committees and leave political control in the hands of the ruling class. Throughout history, we have witnessed what power the possession of the state gives to the capitalist class in its struggle with labour. It is through its political strength that the capitalists deprive us of civil liberties which makes the peaceful agitation for the revolution impossible. We have seen how the employing class will resort to coercion to suppress resistance.  The ability to use force flows directly from the ruling class control of the state which it secures at the ballot box. Therefore, in order to achieve a peaceful revolution, we must capture the powers of the state at the ballot box and prevent the capitalist class from deploying the police and military forces against the workers’ movement. The political issue confronting the working class is the preservation of civil liberties and the destruction of the political state. The Socialist Party urges fellow-workers to use their votes to capture political power—not to play at politicians or pose as statesmen, but to use their votes to dismantle the state machine so as to permit workers the freedom to engage in the constructive task of creating socialism. To believe that Parliament can be used as the means of permanently improving the conditions of working people, by passing a series of reforms, is to believe in parliamentarianism. The Socialist Party, despite the allegations of the barricadists and insurrectionists or the syndicalist proponents of general strikes, is not a parliamentarian party. It believes in entering Parliament only as a means of doing away with all the institutions which stand in the way of the common ownership and democratic control of the means of production and distribution. Let us study economic conditions that we may understand them and agree on a common end, which can be none other than to take over the means of production and distribution and operate them for use instead of profit.
By ajohnstone at August 12, 2016