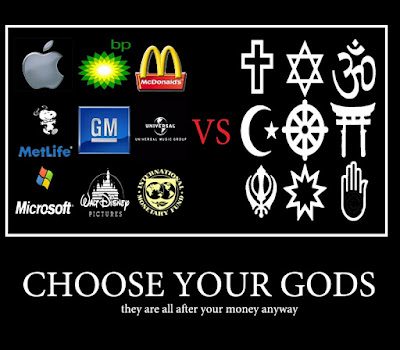 The socialist point of view rests solidly on the materialist conception of history, a way of looking at things that focus on how human communities meet their actual survival needs by producing what they need to live (their economic systems, in other words). Out of this process, the human brain weaves its ideas, which eventually exert their own influence on the cycle, causing it to become more and more complex as society evolves. This approach, known as historical materialism, is a scientific method for helping us understand how and why capitalism does what it does. Armed with this understanding, socialists realise that capitalism can never deliver the goods for the vast majority of people. Other approaches, lacking this focus and overlooking the basis of capitalist society, can easily miss this point, so that their advocates get bogged down in vain efforts to make capitalism work for the majority.

The Socialist Party takes a non-theistic, materialist approach to things, in particular to society and social change. Religious people believe in the existence of at least one supernatural entity that intervenes in nature and human affairs. Socialists hold that we only live once. Religious people believe in some afterlife. Clearly, the two are incompatible. In short, the belief in a creator stands in direct opposition to the materialist conception of history. The Socialist Party is a materialist party, grounded in an approach that says humans make history and create their own institutions.  Essentially the materialist conception of history suggests that any historical period is to be understood by the way in which men set about satisfying their needs at that time – in other words by the mode of production in operation. It also goes further than this and it suggests that the superstructure of society (that is its culture, its conception of legality, its religious and scientific ideas and so on) is rooted in the mode of production. It follows, of course, that in a period of social revolution, when one mode of production is being replaced by another (feudalism by capitalism, for example) there will be a correspondingly massive upheaval in men’s ideas and in the ways in which they interpret the world. It is in this sort of way that Marxists explain a phenomenon such as the Reformation. We point out that the protestant ethic is brilliantly adapted to the needs of the rising capitalist class, in the same way that the ideology of the Catholic church formed one of the mainstays of feudal society. Thus Reformation and Catholic backlash represented the struggle between feudalism and capitalism being fought out on the battlefield of ideas, with religious interpretation and dogma as the weapons.

This approach as a matter of course precludes any approach to the world that involves intervention by transcendent entities, be they God, D'jinn or Faeries. If all human ideas emerge from material conditions, then that is where the idea of god originated too. Remove the "supernatural" and there is no religion. What is religion without the idea of a god that intervenes in the lives of human beings? The Epicureans didn't contest that the gods existed somewhere in the ether but denied that they had any influence on human affairs and so didn't need worshipping or placating. Were they religious? Religions exist that do not believe in higher powers, or afterlives, or are personal, or are organised so I think these are all red herrings of a definition. What characterises all religion is that the process that it makes assertions (generally not restricted to metaphysics) is not strictly through reason, rationalisation, deduction, observation or testing.

Socialists hold that materialist explanations of human society and the rest of nature supersede supernatural ones. A religious perspective won't necessarily prevent anyone from striving to abolish capitalism and its evils, and the ethical elements of religious teachings may even be what first make many people aware of the injustices of a class-divided society. But they don't in themselves lead to an understanding of the causes of such injustices. (More often than not, religious institutions themselves justify and commit them.) The world socialist perspective is in any case essentially post-religious because the case for socialism hinges on the scientific use of evidence. Socialists, therefore, look on supernatural explanations as obsolete.

Socialists see it as pointless to demolish religion with rational and logical criticism. The kind of change in society that the socialist party is proposing then mere atheism is not enough. All members of the socialist party are "atheists" (we do not permit people with religious viewpoints to join) though they may not self-describe as such. But mere atheism on its own is not enough. Prominent "new atheists" such as Sam Harris are just an apologist for the present order. It is said that Unitarian Christians is the last step before atheism.

Putting aside organised religion or "life after death", atheists realise any religion is essentially by definition irrational reasoning but don't necessarily say it is harmful to society. What atheists fail to effectively explain is why irrational ideas arise and become powerful at holding back society. Socialists avoid taking up absolute or, as you might say, supra-historical positions. We do not argue that religion has always been reactionary. Over long periods it did represent a progressive force. We must try to look at religion in terms of the social function it fulfils. One important reason why we cannot afford to lower our guard towards religion is that not all peoples have reached a similar level of religious understanding and scepticism. Around the world,  religion is still very much a weapon wielded by the present ruling class and since we are world socialists and do not just restrict our vision tour own shores, we must actively confront religion in these areas – as far as we can.
By ajohnstone at August 28, 2016